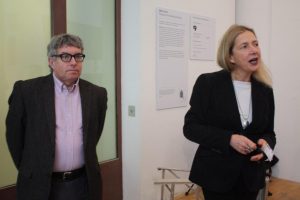 A material history of London dredged from the Thames going back to the 17th century and a tree-tall aviary with chirping birds manage to co-exist in the latest astounding exhibition mounted at the Whitechapel Gallery in London.

These are two manifestations of the practice of the American – how to describe him: artist, explorer, archaeologist, historian, scientist, collector, activist? – Mark Dion (pronounced die-on).

Scoured from the Thames foreshore are scores of artefacts, the detritus of trade and trash, neatly arrayed and catalogued in a huge double-sided cabinet. The aviary, entitled The Library for the Birds of London, is a new commission that is part of Mark Dion’s long examination of the natural ecosystem in the 21st century. 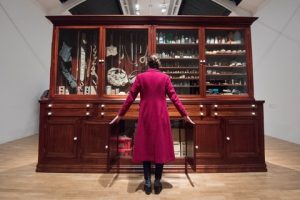 This interdisciplinary disciple creates “a world in its own right, a narrative of social and political content. In his work there is a very powerful fusion of these things, at the same time creating a new aesthetic,” says Iwona Blazwick, director of the Whitechapel, who curated the exhibition.

The show is a marvel both of curatorial prowess and physical assembly, for the expansive exhibits almost burst the gallery confines.

The aviary makes its debut here, while the exploit known as Tate Thames Dig goes back to 1999 but is none the less intriguing for that. It dates to the start of the modern “mudlarking” craze, when there was effectively a free-for-all in river souvenir hunting. Since then, the Port of London Authority, which owns the river bank, has insisted on hobbyists and scavengers buying permits.

Mark Dion invited a group of individuals, mainly teenagers and pensioners, to join him in mudlarking for artefacts at low tide on the foreshores of Millbank and Bankside, one week at each site. In 1999 what was once Bankside power station was being transformed into Tate Modern, so that the Tate collections would be housed in museums on either side of the Thames. 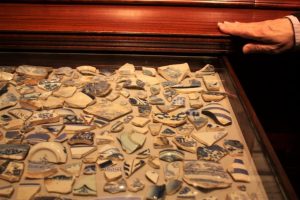 The team – Mark celebrates them in a series of sepia photos alongside the collection cabinet – unearthed clay pipes, plastic toys, credit cards, bottle stoppers, bear claws, petrified shards of glass, oyster shells, animal bones, shoe soles and much more. All these objects were no deeper than six inches down and are filed neatly into the display cases and pull-out drawers of the smart wooden cabinet. Tidal flow charts to be seen nearby add a sense of the excitement of the search.

The installation, initially shown in the Art Now room at what was then known simply as the Tate Gallery (now Tate Britain), combines historic and contemporary finds: plastic bottle tops complement remnants of ancient pottery. 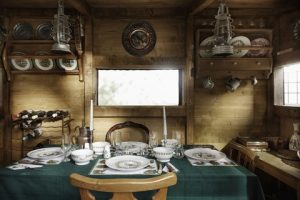 It underlines the long history of a city that has lived for the river to transport goods and people, and with the constant activity around it – the Globe and other theatres, a 19th century prison at Millbank whose inmates suffered a virulent outbreak of cholera, and many more constructions.

In the last two decades there has been “an explosion” of mudlarkers, and Mark Dion has no intention of repeating the excavation, rich though its results proved, although he says: “We [in society] today produce the most material culture, the most [household and commercial] refuse.”

He has converted Tate Thames Dig into a cabinet of curiosities like those popular in the Renaissance, one of his favourite methods of making his artistic and sociological points. Unlike a professional archaeologist, he has the freedom to make what he will of his finds and to allow his audience to draw their detailed conclusions about his accumulations; but he does want people to understand history as a continuity. 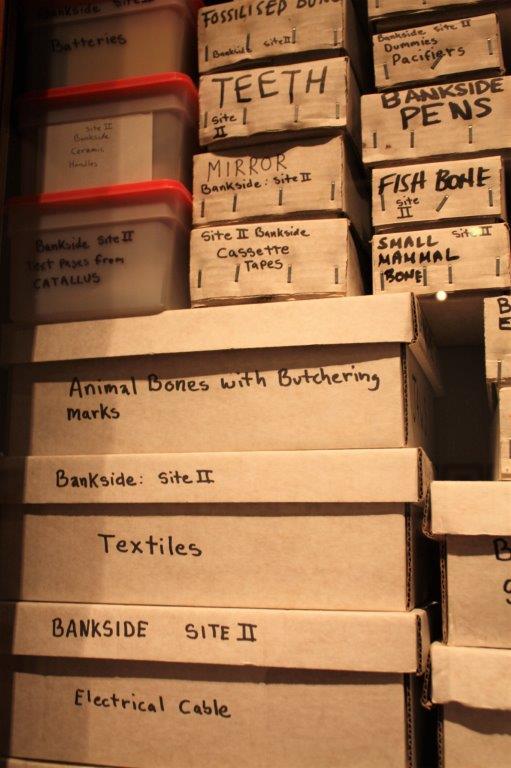 Textiles and bones from the Thames.

Mark Dion appreciates the rich history of the visual representation of nature and takes advantage of this in raising the curtain on his “theatre of the natural world.”

He takes us on a journey through a sequence of installations, the most graphic of which examine the way that flora and fauna are moving towards crisis point. How can the natural order exist in cities and how is it managed and controlled? 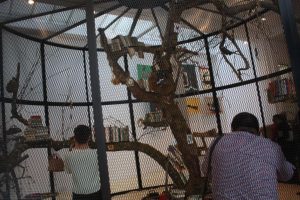 The Library for the Birds of London (partial view).

The Library for the Birds of London is the latest of a series of walk-in, experiential aviaries he has created sine1993. The huge – 400 cm by 600 cm sanctuary is a temporary home to 22 zebra finches, a species noted for its highly social behaviour.  What he has gathered here are mainly males, but a female has already begun to build a nest in the branches of the central apple tree. Apple refers to the tree of knowledge, and forbidden fruit. Our trees of knowledge are perhaps beginning to show the signs of root rot in some cases, says the artist. The birds are surrounded by 600 books on ornithology, environmentalism, literate and the natural sciences.

Birds can be perceived as transmitters of information between the heavens and earth: they are telling us a lot about the environmental health of the planet, says Mark Dion. We have an incredible relationship to birds: what we do affects them dramatically, yet what they do hardly affects us.

Near this aviary from which a sweet birdsong enlivens the gallery, is a series of Hunting Blinds, based on structures used to disguise hunters in the wild. Each is characterised by the personality of an imagined inhabitant, from the glutton or the dandy rococo to the librarian. Viewers are invited to examine the belongings and attributes of their hunting owners: readers of books, connoisseurs of curios, collectors of trophies and heraldic standards. 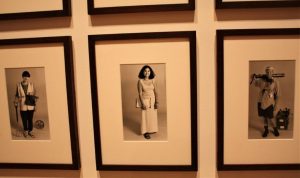 Hunting is these days branded by many people as a cruel system, but it has an intimacy that is lacking in the industrial production of animals, these displays indicate. The abstract way we use animals for food is now invisible.

Upstairs, the visitor enters a representation of a 19th century naturalist’s study, decorated with wallpaper designed by the artist into the 19th century, among other attributes showing the “evolution” of the polar bear from threat to hunted beast at risk from climate change.

Deploying anatomical humour and dissecting hype is World in a Box, a set of 27 charts, graphs, diagrams and lists in techniques ranging from lithography, cyanotype, digital, screenprint, etching, letterpress and woodcut in a small storage chest, like a Wunderkammer. 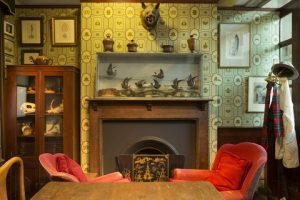 The Bureau of the Centre for the Study of Surrealism and Its Legacy (detail).

The exhibition continues with the Bureau for the Centre of the Study for Surrealism and its Legacy, a recreation of a 1920s curator’s office filled with specimens showing the strange magic of aspects of ancient and modern culture. According to the artist this work is designed to “provide a fitting setting for the contemplation and study of Surrealism.”

The Wonder Workshop has cabinets of curiosities in darkness with ultraviolet illustrations of animals, plants and instruments from 17thcentury engravings, many of them extinct and obsolescent. 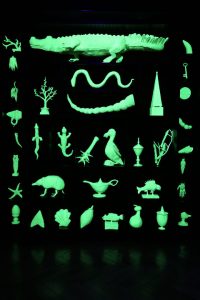 An overarching aim of Mark Dion is to slow down the spectators. The reward for the careful viewer is: the more time you spend with a work, the more you are able to decode it. “I have seen people running through exhibitions like they are running through Ikea,” says Marc Dion.

Mark Dion, who was born in New Bedford, Massachusetts, and lives in New York with his wife and frequent collaborator Dana Sherwood, has travelled widely to chronicle the wonder and fragility of life on earth – the suicidal relationship of human beings to the plane — drawing on the techniques of scientific enquiry, taxonomy and museum display. 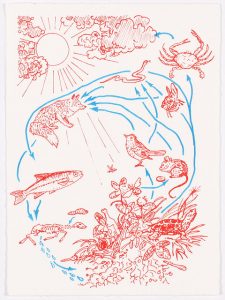 A print from The World in a Box.

Captions in full for relevant pictures:

The Bureau of the Centre for the Study of Surrealism and Its Legacy, 2005 Mixed media. Courtesy Manchester Museum, University of Manchester. Photo: Paul Cliff.

World in a Box, 2015. Suite of 27 prints in custom-made oak storage box with etching and letterpress on lid and lithography inventory list. Courtesy the artist and Tanya Bonakdar Gallery, New York. 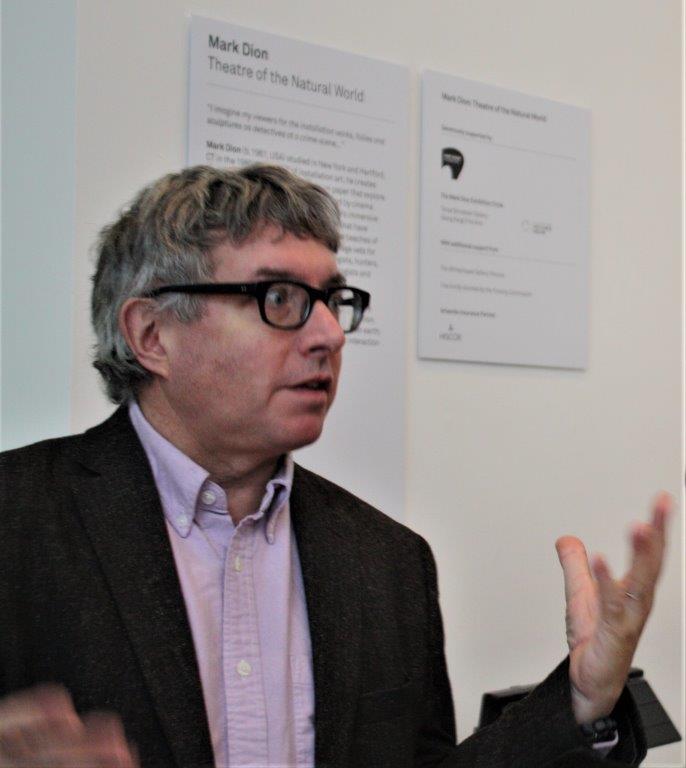 Mark Dion: Theatre of the Natural World is at Whitechapel Gallery until May 13, 2018.