Songs of Love concert at the Grosvenor Chapel

Chrisanthy P. Lemos, Dr. Evelyn Stefanaki,  Dimitris Kraniotis and the charitable foundation Chance for Life, organised a musical journey into the romantic melodies of the beginning of the previous century, on the evening of the 13th of March, in the premises of the solemn and imposing Grosvenor Chapel of South Audley Street in London’s Mayfair.

Oleg Pogudin, one of the most iconic Russian interpreters and leading performers of the 19th century romances and lyrical songs gave a single concert with his Songs of Love programme.

Born and educated in St. Petersburg, he is rightfully known as the “Silver Voice of Russia”. His voice is warm, clear and soulful. Oleg is a versatile singer: his repertoire ranges across the genres of Russian town and classic romances, European arias from operas, operettas and musicals, folk songs, guitar compositions and even some 20th century ballads. It will not be an exaggeration, though, to call him an ambassador of Russian 19th and early 20th century culture. 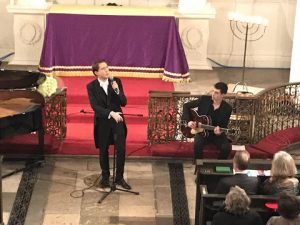 Pogudin’s performance geography stretches across three continents and he sings in many European languages. In the artist’s opinion, “in difficult times of complicated relationships between nations and countries,  culture is something resembling a magic wand: cultural events unite people, and help defuse the situation.”

The singer earned many national awards, prizes and honorary titles, among which are the “Honoured Artist of the Russian Federation” and “People’s Artist of Russia “.

His debut in London was an act of noble charity: all the proceeds from the concert went to medical treatments for 2 year-old Samir Shafigullin, who is looked after by Life Line charity in Russia. 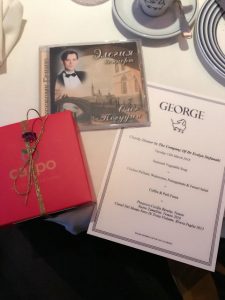 Mr. Pogudin chose a fantastic array of Russian and European classic romantic songs for his London performance and was accompanied by piano and by talented Greek Kostas Georgiadis in guitar. He also performed selected songs for the Hellenic guests of the evening and these included works from M. Theodorakis, M. Sougioul, G. Zabetas and I. Ritsiadis. His performance in the Greek songs was impeccable and received a standing ovation at the end of the performance.

Kostas Georgiadis is a Greek composer, producer and session guitarist based in London. He is writing and producing his own music which reflects his broad range of interests from film and classical to pop, electro and soul combining elements of each in his compositions. As a professional guitar player Kostas has taken part in many studio recordings and live performances with established artists in various music styles such as pop, trip hop funk and rock. Kostas is a guitar and music production tutor at The Institute of Contemporary Music Performance (ICMP).

After the concert VIP guests enjoyed a wonderfully prepared dinner at the George private members club of Mayfair in the company of the star of the evening Oleg Pogudin.

Capt. Antonio M. Padrón on the “Sea of Opportunities” project