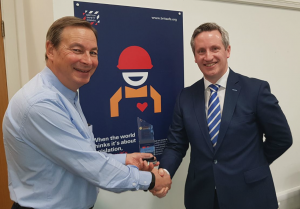 Lawrence Waterman, OBE, Chairman of the British Council, has been honoured with the Lifetime Achievement Award for his contribution to health and safety at the Safety and Health Excellence Awards gala night on 11 April 2018.

The Awards were launched this year to celebrate innovation and achievements in occupational safety and health and were held at the VOX Conference Centre at the Birmingham NEC.

Presenting the award to Lawrence Waterman, Tim Else, Director of Western Business Publishing, said: “Lawrence’s contribution to the health and safety industry over many years has been nothing short of outstanding. That’s why I am so delighted to present him, on behalf of the panel of judges and all of us at Western Business Publishing, with the Safety and Health Excellence Award for Lifetime Achievement.”

“I am a very proud recipient of this award,” said Lawrence. “Like many people who worked on the London 2012 Olympic Games, I was privileged to have the opportunity to make a contribution to a project, which the whole country felt proud of. Now, as Chairman of the British Safety Council, I feel equally positive about the opportunity to work towards achieving and maintaining standards of excellence in health and safety. However, there is nothing better than receiving approbation from your peers and I am very grateful for it.” 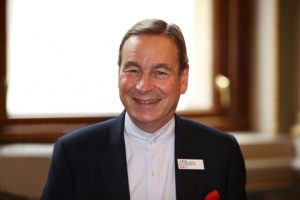 Lawrence Waterman OBE CFIOSH is the Chairman of the British Safety Council and a founding partner at the Park Health and Safety Partnership. He was formerly head of health and safety for the London Olympic Delivery Authority and is a past president of IOSH. Lawrence is also a visiting professor at Loughborough University, where he both teaches and participates in research. Lawrence was appointed OBE for services to health and safety in the Queen’s Diamond Jubilee Honours.