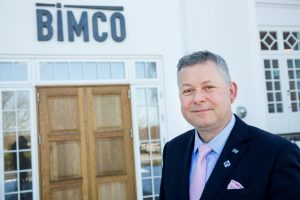 “The IMO has done something no one has done before: set an absolute target for emission reductions for an entire industry. It is a landmark achievement in the effort to reduce emissions, and something that every other industry should look to for inspiration,” says Lars Robert Pedersen, BIMCO Deputy Secretary General and delegate at the IMO meeting.

BIMCO is very satisfied with the Green House Gas (GHG) strategy adopted by the International Maritime Organization (IMO) at the Marine Environment Protection Committee on April 13. The strategy outlines a target to reduce GHG emissions by at least 50% by 2050 compared to 2008 while pursuing efforts towards phasing them out.

Lars Robert Pedersen calls the target ambitious, but not impossible: “In BIMCO we believe that the industry can deliver on this target – even if we don’t exactly know how, yet,” he says.

BIMCO is the largest shipping association in the world, with around 2000 members across the industry, representing 56% of the world’s tonnage.

“The strategy shows that there is only one road ahead, and that is the road towards decarbonisation. The strategy reinforces existing IMO regulations to enhance the energy efficiency of ships and sets out the long-term goals. This will guide the development of new technology and the design of new ships,” Pedersen says.

“Now we have to focus on the mid-to-long term. We have to find the technology and procedures that will drive us towards zero GHG emissions,” Lars Robert Pedersen says.

BIMCO sees zero carbon emissions as a realistic goal for the second half of this century, but investments in research and technology are required to get there.