HSH creates basis for privatisation in 2017 and is looking ahead

HAMBURG/KIEL – In the year 2017, HSH Nordbank established the conditions for a successful privatisation, thereby laying the foundations for the future. Despite the huge uncertainties ahead of the change of ownership, the Bank demonstrated a solid performance and increased its operating result before taxes by ten percent. New business is almost at the good pre-year level, and in the unsettled environment of the change in owners almost one third of this business was signed with clients who opted for HSH Nordbank as their partner for the first time. On the cost side, there were substantial savings successes, and thanks to the systematic acceleration of the wind-down strategy, legacy assets were more than cut in half within the space of a year.

The Group net result before taxes of € -453 (+121) million is marked substantially by the effects of privatisation; in line with statutory rules these effects will essentially be absorbed in the 2017 annual financial statements.
Additional loan loss provisions of € 1.1 billion were set aside for the disposal of the last remaining € 6.3 billion in non-performing exposures alone. This disposal has fulfilled a key requirement of the privatisation. This means that on the completion of privatisation (closing), expected in the second or third quarter, the Bank will be almost completely free from its legacy assets and head into the future with a healthy balance sheet as well as consistently
strong capital ratios.
“For the Bank, the year 2017 was dominated by the privatisation. We have worked intensively towards this goal and the entire workforce was rewarded for its hard work at the end of February 2018, when the sale was agreed. This marks the dawn of a new era. We are looking ahead, we know our potential and have a clear goal: We will become an agile bank with streamlined structures and a strong and reliable partner for our clients, most of which are medium-sized businesses. Kiel and Hamburg will remain our home locations; additionally, we will expand the radius of our activities,” said CEO Stefan Ermisch.

Total income increased markedly to € 1,572 (921) million and is bolstered by net interest income of € 1,179 (607) million. Alongside income from the operating business, it also includes the aforementioned securities sales and the revaluation of hybrid capital. In the Core Bank, income before taxes improved to € 732 (667) million thanks to operating income and the sale of securities. Unrealised gains were capitalised to counter the heavy loss of the Non-Core Bank of € -1,583 (-299) million incurred in the wake of privatisation. The result of the items for the entire Bank, which is summarised under Other and consolidation, totals € 398 (-247) million and includes the positive effect from the revaluation of the hybrid capital.

Savings achieved in administrative expenses – Privatisation costs exert strain
The savings achieved under the ongoing cost-cutting programme are reflected in the drop in administrative expenses of just under 20 percent to € -515 (-634) million, half of which is accounted for by personnel expenses and half by operating expenses. Personnel expenses of €-230 (-256) million reflect the planned further reduction in the number of FTEs to 1,926, down from 2,164 at end-2016. Cutbacks in costs for IT projects and service providers are visible in the decline in operating expenses to € -249 (-278) million. Costs for strategic projects,
for example the accelerated portfolio wind-down, had the opposite effect. Additional expenditure in connection with privatisation was reflected in the result from restructuring and privatisation at € -66 (-110) million.

Core Bank with considerable profit growth
Even though the outcome of the sale process was open for almost the entire year 2017 and large resources were deployed in preparation for the change of ownership, the Core Bank reported a good performance and substantially exceeded the pre-year figure with income before taxes of € 732 (667) million. The increase in total income to € 1,055 (1,032) million contributed to this result, boosted by the operating business as well as by the sale of securities totalling € 356 (186) million. Including these effects, net interest income improved to € 773 (680) million.

In a year marked by preparations for the privatisation, new business was almost at the previous year’s level at € 8.5 (8.9) billion, of which € 2.3 billion was extended to 120 newly acquired clients.

New deals in the sector-focused Corporate Clients segment come to € 3.1 (3.8) billion in ahotly contested market. At the same time, the cross-selling result was improved thanks to stable client relationships in Industry & Services, in particular. In Energy & Infrastructure, the Bank successfully entered the market in the Netherlands and Portugal and expanded its position in Ireland. Around one third of new business was contracted with clients from the renewable energies sector.

New business in the Real Estate Clients segment, which was already strong and has been expanded slightly to € 4.7 (4.6) billion, once again demonstrates that it is firmly anchored in Germany and underscores its expertise in assisting international investors on the German market.
Although the shipping markets showed slight recovery trends in recent months, they remain challenging. The management of new business in the Shipping segment remained deliberately restrictive and € 0.5 (0.3) billion was signed only with international shipping companies with a good credit rating.

The Treasury & Markets segment showed a good performance. Derivatives business with institutional investors and with derivatives contributed to good net income before taxes of € 470 (326) million, as did the realisation of unrealised gains from the sale of securities. The refinancing base was broadened with the successful raising of private client deposits, which began in the autumn.

Group perspectively without legacy assets – NPE sale leads to one-off burden of € 1.1 billion
In the course of the privatisation, a portfolio consisting of non-performing exposures – pri marily ship financing and other legacy loans from the years prior to 2009 – amounting to € 6.3 billion will be sold to a special-purpose entity related to the investors. Following this portfolio transaction (depending on the closing of the sale), HSH Nordbank will have removed virtually all legacy assets from its balance sheet and have an NPE ratio of less than
two percent, which is low even by European standards. The Non-Core Bank, which currently holds both non-performing loans and non-strategic exposures due to EU legal restrictions dating from the past, is to be dissolved.

For the portfolio transaction to be implemented with closing, the Bank has set aside nonrecurring additional loan loss provisions of € 1.1 billion, which will weigh on the Bank’s results directly and in full because the second loss guarantee has been fully utilised in balance sheet terms. Including the write-downs on past ship loans and for energy exposures dating from the years before 2009, loan loss provisions before offsetting from the second loss
guarantee and currency effects come to € -1,402 (-1,577) million. Adjusted for the high burden from the portfolio transaction, therefore, they remained well below the previous year’s figure. In the Core Bank and in Other and consolidation, reversals of € 5 (12) million and € 6 (5) million resulted in a slightly positive loan loss provisioning amount.
Offsetting from the guarantee by the federal states, which was fully utilised in the first quarter of 2017, came to € 126 million (including current result, hedging effect of the credit derivative and effects from the loss accounting). Loan loss provisions in the lending business after guarantee thus came to € -1,276 (156) million and had a substantial impact on the Group net result. Since 2009 the Bank has processed guarantee fees totalling € 3.4 billion for the second loan loss guarantee from the federal states Hamburg and Schleswig-Holstein provided.

Further improvement in risk coverage, portfolio quality and NPE ratio
The Bank has made good progress in the ongoing wind-down of non-performing exposures
from the past, cutting its non-performing exposures (NPEs) nearly in half to € 7.5 (14.6) billion.
The improved portfolio quality is reflected in a drop in the NPE ratio within the Group
to 10.4 (17.5) percent. After the sale is closed and the portfolio transaction completed, it will
be less than two percent. In the Core Bank, the persistently good portfolio quality was
demonstrated by a reduced NPE volume of € 0.8 (1.0) billion and a corresponding drop in
the NPE ratio to 1.6 (1.9) percent.

CET1 ratio at a good level despite burdens from the portfolio transaction
Including the effect of the second loss guarantee, the Common Equity Tier 1 ratio (CET1 ratio) improved to 18.5 (14.1) percent, despite a high burden from the agreed portfolio transaction.
Even without considering the effects of the guarantee and also after the portfolio transaction, the pro forma CET1 ratio works out to 15.4 (12.6) percent. The increase in capital ratios is primarily attributable to the decline in risk exposures of around € 6.4 billion to € 22.2 billion, which is also reflected in Group total assets of € 70.4 (84.4) billion. All told, therefore, the bank has repeatedly and distinctly improved its leverage and risk ratios.
The leverage ratio, which describes Tier 1 capital in relation to business volume, has risen to a very solid 7.7 percent (6.9) and clearly illustrates the increasing solidity of the Bank’s balance-sheet structure.
Outlook

“A transformation lasting several years from a Landesbank to a bank with private shareholders lies ahead of us, and change will be part of our everyday life. Our current business areas provide the framework; at the same time, we will broaden our horizons with a sense of proportion and keep our costs firmly in our sights. There is plenty of potential for a smaller,  healthy and better commercial bank from the north, and we will take advantage of it,” said Stefan Ermisch.

The Bank expects the sale agreed in February to a group of private equity investors acting independently of each other, Cerberus Capital Management, LP, J.C. Flowers & Co. LLC, GoldenTree Asset Management LP, Centaurus Capital LP and Austrian bank BAWAG P.S.K., to be finalised by the third quarter of 2018 (closing) once all the necessary conditions have been met. All the same, the current financial year will be significantly influenced by the privatisation process: Extensive restructuring provisions have already been scheduled for the second half of 2018. In the upcoming transformation years, the Bank will invest in both the expansion of its business and a streamlined group structure once the guarantee has been terminated and the Non-Core Bank wound down. A settlement of € 100 million will be payable to the federal states for the early termination of the second loss guarantee on closing. For this reason, the Bank expects a net loss before taxes of around € 100 million for the 2018 financial year. 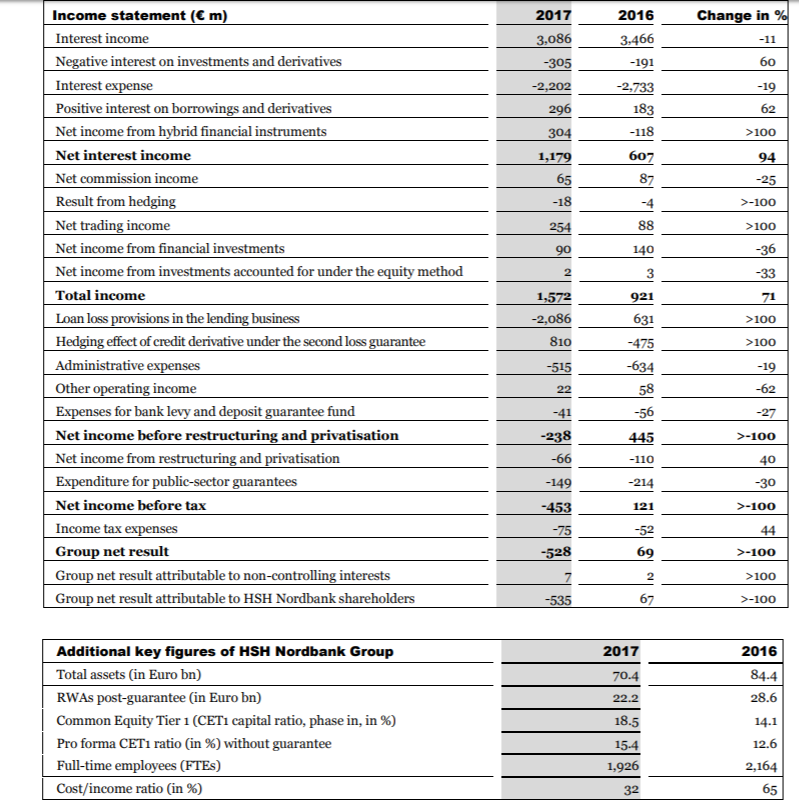