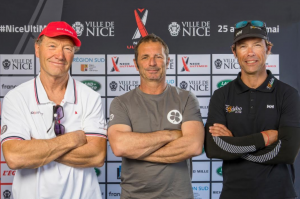 – All systems go for the Sud-Provence-Alpes-Côte d’Azur Region Prologue this Friday at 11:00am

– Light airs forecast for this course between Marseille and Nice
– The crews of Sodebo Ultim’, IDEC SPORT and Actual-Grand Large Emotion are sure to make the most of it to get into their stride, and get the bit between their teeth of course

Tomorrow, Friday, at 11:00am, the Sud-Provence-Alpes-Côte d’Azur Region Prologue, will set sail from Marseille to Nice. After a two-day exhibition at the heart of the Vieux Port, the crews skippered by Thomas Coville (Sodebo Ultim’), Francis Joyon (IDEC SPORT) and Yves Le Blévec (Actual-Grand Large Emotion) will be able to set the standard and put on a fabulous show along what is a truly iconic coastline. Though it is non-point-scoring, this Prologue will see some great competitors pitted against one another and they’ll be keen to really get the most out of their fantastic machines. The scenario will involve light and unpredictable weather conditions, that are typically Mediterranean!

This Thursday in Marseille, it’s match night (first leg semi-final of the Europa League between OM and Salzburg) as well as the eve of the Prologue in the Nice UltiMed. Indeed, following on from the exhibition, it’s time for the face-off! On Wednesday and Thursday, the three trimarans competing in the Ultime class remained dockside so the locals could really make the most of the spectacle. However, from tomorrow, Friday, at 9:00am, Sodebo Ultim’, IDEC SPORT and Actual-Grand Large Emotion will cast off from the pontoons of the Vieux Port to compete in the Sud-Provence-Alpes-Côte d’Azur Region Prologue.

Light airs, showstopping spectacle
It’s at 11:00am on the dot that Renaud Muselier, President of the Region, will give the start of the Prologue and release the three Nice UltiMed giants into the Mediterranean. “We’re expecting a SE’ly breeze of 6 to 8 knots for the start”, announces Christophe Gaumont, Race Director. “The utmost caution is called for, given the navigation zone and we’re hoping for the wind to gradually establish itself in the middle of the day to reach a maximum of 15 knots, before fading in the late afternoon. We’re in a typical Mediterranean spring situation with clashes between the air masses, which is generating changeable conditions.”
The race start will set off from the southern harbour off the port of Le Roucas, so it can be viewed by the public from the coast road. A showstopping spectacle is on the cards, and that’s just the beginning. “The Ultimes will then make their way along the calanques (rocky inlets) before making for Toulon harbour via the islands of Hyères, between the Giens peninsula and Porquerolles. The next stage of the course will be unmarked so the competitors can make the most of the building breeze. This will open up play on a tactical level. The boats are expected to make Nice late or even very late tomorrow evening”, explains Christophe Gaumont.

Throughout this course, the sailors and guests will be able to enjoy some exceptional views of the Sud-Provence-Alpes-Côte d’Azur Region. The show will also be visible from land thanks to several course marks set close to shore. “We’re going to have our eyes wide open for two reasons: the coast will be superb and there is a possible risk of collision”, Francis Joyon points out.

“We can’t help but try to get the best out of our boats!”
Though the Sud-Provence-Alpes-Côte d’Azur Region Prologue is non-point-scoring, this first major sporting challenge of the Nice UltiMed will be the opportunity for the three crews to limber up (again) prior to the main event, the ‘offshore sprint’, the start of which will set off from Nice on Thursday 2 May at 1:02pm. Francis Joyon perfectly sums up the mindset required for this showdown on the eve of the Prologue: “This course between Marseille and Nice will be the season’s first contact with our colleagues. The race crew has joined us and it’s time to get familiar with our boat again, as some haven’t sailed aboard her for a long time. Even during the delivery trip, we can’t help but trim the boat as best we can to get the best out of her! Naturally this sensation will be further heightened with other Ultimes alongside us.” We can count on Thomas Coville and Yves Le Blévec to set sail with the same mindset!