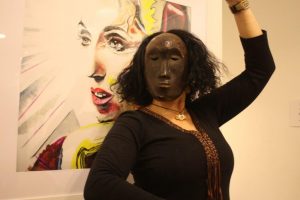 As a “collaborative gallery,” Espacio in Bethnal Green Road, Shoreditch, brings scores of artists together.  Enlivening its latest exhibition, entitled Context Free, was the ultimate collaborative artist thanks to her mastery of mimesis – a heavily freighted term of Greek origin.

The performance artist Marcia Mar practises simultaneous imitation of the words and singing of people she encounters, as part of her campaign to effect fundamental social transformation globally. 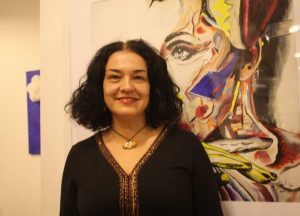 Her applauded intervention came on the private view evening of the April 24-29, 2018, show which featured representational and non-representational artworks from sculpture, assemblage, installation, painting, collage, textile art, printmaking, photography and filmmaking. Even a set of bricks. The whole was replete with density of ideas – eclectic (another Greek catch-all) seemed too tame a word for it. The curators somehow achieved a discourse unifying the 18 participants.

Marcia Mar had the evening’s guests agog as she demonstrated what she calls “mindful mimesis in empathy performance.”

The multimedia practitioner says that she can echo the voice “of any human, in any language, for peace.” World peace is precisely her motif: “I am another you, mirroring peace.” This is “purposeful, cultural mindful content-sharing.” 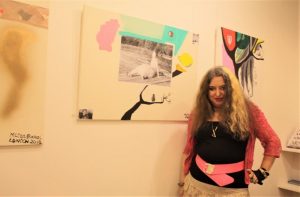 She invites individuals to sing and to deliver personal stories “about what makes life worth living,” chiming their chords and words exactly, no matter what the language. Among the singers in the room was opera and jazz performer Chris Louis.

The echoing of stories celebrates the versatility and innovation of oral story-telling, says Marcia.

A native of Porto Alegre in southern Brazil (the 10th most populous city in the country and a medium-sized seaport), Marcia already speaks several languages but is considerably more ambitious. Conscious of the 7,000 living languages in the world, Marcia says: “My hope is to travel the world – I want to speak all human languages.” 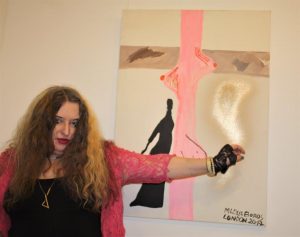 Marta Boros with her canvas Ladies.

One reason for that is her anxiety over the many tongues that are becoming extinct. She has a deeper drive, though: to help bring to greater flower the multicultural traditions, and to help develop the life scientific.

“We are here to look after the genetic code.  I believe we can switch it on and off,” she declares, elaborating that with the human brain packed with millions of neuron cells, the permutations and combinations of its activities can exceed the number of particles in the universe, making everything possible. We can choose, as ancestors of future generations, to fine tune our human journey in peaceful resonance and share in abundance to end famine.

Marcia wants to rewrite the Epic of Gilgamesh, a Babylonian text which is said to be the earliest surviving great compilation in literature, predating Homer by 1,500 years, and which centres on the quest for the meaning of life. In London, she counsels refugees from Africa and the Middle , enhancing her contact with many cultures and backgrounds. 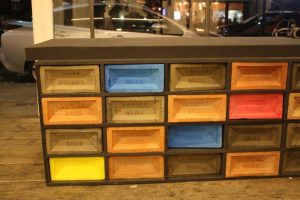 For her performance, she donned a guru mask from eastern Malaysia traditionally brought out when there are problems that no-one can handle.

Marcia has just had a solo show, entitled Peace in Spring, at Nolia’s Gallery, 60 Great Suffolk Street, London SE1, five minutes’ walk from Tate Modern. Marcia prepares for her painting a set of rituals involving dance, taste, music and singing – a stimulation, she says, of the full range of sensory experience including the internal senses of balance, temperature and proprioception (the ability to sense stimuli in the body). 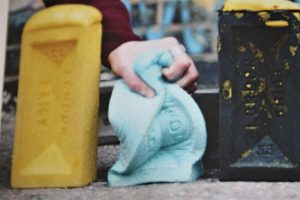 The art term “installation” was taken to a new level, albeit a physically low level, by Boano Prišmontas, a London-based firm of architects founded by Tomaso Boano and Jonas Prišmontas. In collaboration with an independent artist and architect Ricardas Blazukas they “built” into the gallery part of what they call The London Brick Series, solid-looking but squashy bricks forming a small temporary wall underneath the main window. Sundry other bricks were mounted on plinths with the legend “please touch.”

London bricks – representing the capital and its architecture – have been produced for nearly a century and half and formed the structure of more than 5m homes and other premises. They were once a canvas for artistic explorations, for rebellion and non-conformity, say Boano Prišmontas and their Kuwait-based, Lithuania-born collaborator. The artists posit that a new “developer style” is creating an “urban environment with a reassuring and soft aesthetic where bricks are used as a cosmetic touch of trendiness.” 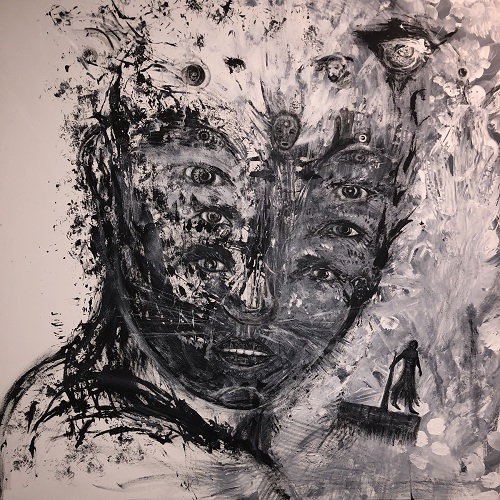 By being covered by a thin layer of acrylic paint, under vivid colours and plasticised, the brick as a concept is pushed one step further, they say… insisting that “bricks are beautiful.”

Overall, the brick project “is an artistic exploration to celebrate that period when neighbourhoods like Shoreditch, Dalston and Hackney were not yet a city-brand, but [were] areas where brick walls were canvas for graffiti and artistic explorations, for rebellion and non-conformity.”

One wall of Espacio was devoted to three stunning works by multi-faceted practitioner, Polish-born Marta Boros. She is developing with ever-greater vigour her works with an autobiographical thread. The three new canvases she presented were entitled: Ladies, Self-portrait and Pink Abstract. The self-portrait recalled an episode of her earlier life in Poland by incorporating a monochrome photo of her in summer at the beautiful Lake Wigry, a favourite holiday spot with a 72 km shoreline in the Podlasie region of the east of the country. 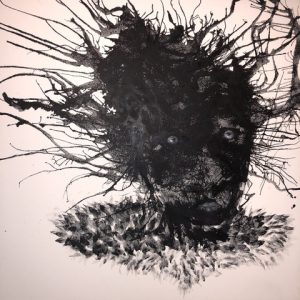 The show was curated by Ana Cockerill, a Brazilian artist and state registered art psychotherapist who has lived in London for 30 years. Her practice includes two-dimensional art combining traditional and digital design, photography, and painting, and installations.

Espacio Gallery opened in 2012, some 100 m from the top of Brick Lane. It is run as a co-operative, funded by artist members and by hiring out the venue to other artists and projects. It says that it has managed to stay clear of outright commercialism by winning the support and embracing the talent of dozens of UK-based artists. Espacio was the brainchild of Brazilian painter Carlos de Lins, and founded by a group of artists who sought a base specially designed to meet their needs. 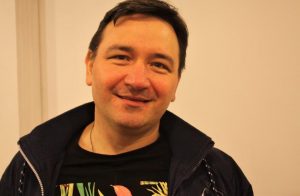