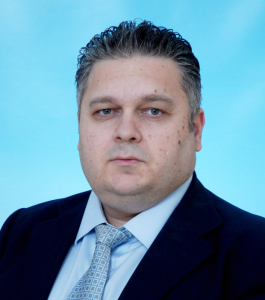 In Wall street, traders will fight daily for new information to trade on. The traders who trade first on the new information are expected to make more on the long run, closing their positions happily, only little after the big crowds follow in to buy the stock. Information is a valuable commodity and is precious to the few who know it first. It is no luck that inside information is so expensive and a privilege to the few, and many brokers and traders will often pay special attention to the stealth buying of the board of directors. If they know something important, then we should be a part of it too!!  Constandinos Karikoglou* writes:

Now, these people are using fundamental analysis for the most part, and they try to take advantage of the sinusoidal movement as per stock theory.

But things in shipping are very different in many ways.

For starters, ships are being born usually in Asia in about 7-8 months ( for an average ship ), and they are being killed usually in India. Their average life time is around 20 years. The market itself is a very snob combination of the international financial markets with a certain time lag, along with Political and Social unpredicting factors, to add on the infrastructure of the ports, playing an important role on the formation on the final market. To make matters worst, there are different sizes of ships competing for the same cargo.

Taking under consideration that in the last century or so, the stock market crisis were about 15 years apart, we can see that there is no pattern at all which can be combined to predict shipping markets.

A good mathematician could possibly argue that all these factors make predicting of future movements an impossible task.

While high profile owners with diversify their fleet, in order not to be seriously damaged from market cycles, small owners need to make a more serious risk analysis prediction. Their rate of return has to take under consideration not only the future demand, but also the price of the investment itself which is a highly volatile commodity and will potentially lock their investment for prolonged time.

It is only natural, that big sums of money are being spent in order to create a valuable market intelligence.

Market intelligence reports are just great work. A lot of resources has been consumed in order to produce easily digestible charts to make decisions, more clear for owners.

But there is one major drawback. And that is this information is readily available to anyone.

So, what is predicted to be a hot cake in the next years to come, it may prove to be a flop once many owners will proceed to accumulate this type of vessel and the supply very fast will exceed the demand. The market will reverse and whoever has followed the prediction may be in uncharted waters.

There is however one type of analysis which will incorporate everything. This analysis will incorporate the big CEO Decisions, the ships being accumulated, the ships being scrapped, the rumours, the hearsay and all factors known and unknown which play an important role of the market price. And that is directly the study of the market price itself, by using technical analysis.

Technical analysis is being used very profitable in combination with good business psychology off course in Wall street. It can be used also on shipping indexes.

They only adjustment that the owners have to make is to fit the technical indicator they like to their business psychology and to stop adjusting. In order for a method like this to become profitable it has to remain the same over the long run. It has to create a repetitive recognizable pattern.

A very simple example of technical analysis and the information it provides can be viewed on the chart provided below, courtesy of stockcharts.com 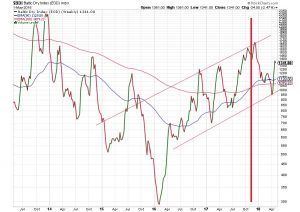 The chart shows a weekly view of the last 5 years of the Baltic Dry Index. Two exponential moving averages one of 80 period and one of 200 period are superimposed on the chart as an example.

As it can be seen despite of the great volatility which has a repetitive action, the average price has bottomed around 300 and ever since has been rising. A confirmation of this is given from the crossover of the two exponential moving averages at around 1000. A very rough correction has taken the BDI from 1700 back to 950 a 44 % decline within a quarter, but the gradient of the moving averages, with a small additional note of a chart support line around 950 may lead us to expect a sharp rise in the next quarter, if the trend does not reverse.

I wonder if this will be actually the case! Could it reach 1800?

*Constandinos Karikoglou has a BEng in Mechanical Engineering and an MSc in Marine Engineering from Newcastle UK, and has been actively involved in Technical Ship Management since 1995. He is currently doing his LLB with the University of London