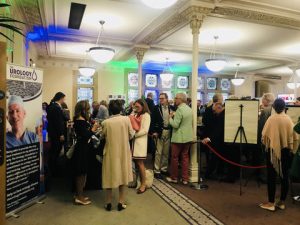 Adrian Goldsmith has survived three cancer episodes with low chances of surviving. While ill, he took on the challenge of starting to play the piano. Within eight years, he achieved not only proficiency with the instrument but composition, music which a wider circle of friends and admirers is beginning to hear. Dr. Evelyn Stefanakis was there with her camera…

In 2015, his property company, Prestigic Holdings successfully hosted a first charity concert on behalf of Prostate Cancer UK. This resulted in five men taking the PSA test (that measures the amount of prostate specific antigen in the blood), three of them testing positive, and of these, two of them lived and one died. Hence the money raised makes a difference as these men would never have dreamed of going for the test. 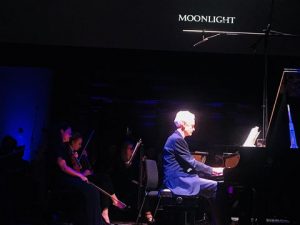 On Wednesday the 23rd of May, 2018, the second such charity concert was staged. The charity this year was the Urology Foundation, which brought on board women, and the focus was on bladder, kidney and testicular cancer. Money raised is going into research towards the long-sought goal of just taking a pill to stop cancer.

Adrian welcomed his friends to the gala concert on a warm “Chelsea in bloom” May evening, in the beautiful Cadogan Hall on Sloane Square. Guests included, Lord St John of Bletso and Mrs Chrisanthy Lemos. Adrian’s message for the evening was: “Find whatever you are good at.” He said that to do so, ”it probably takes a dramatic thing, like cancer, or a business problem, but when it happens, wake up, do something about it.” 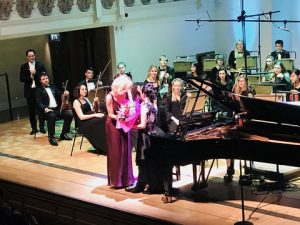 Adrian, who had been around the world three times before being diagnosed with cancer, promised that things look a lot different sitting at the top of Mount Kilimanjaro, compared with watching TV every night. He urged everyone to get off the couch and go and find what they are good at.

Three different ‘nations’ played four very different piano concertos, for the pleasure of the charity supporters. The audience delighted in hearing Eduardo Andrade, a Mexican composer, pianist and conductor, who helped Adrian with his own concert; Aisa Ijiri, a Japanese highly accomplished and award-winning pianist; and Panagiotis Gogos, one of the most talented Greek pianists. 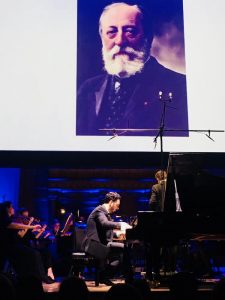 The programme opened in dramatic style with the Warsaw Concerto by Adinsell played magnificently by Andrade, followed by Piano Concerto in A minor of Schuman performed by Ijiri who was wearing a stunning dress by Quintana Couture, the Piano Concerto No2 in G minor by Saint-Saens played with virtuosity by Gogos and finally the Piano Concerto No 2 by Adrian Goldsmith, in a world premiere, performed by Andrade. Adrian surprised his friends by playing with mastery the Moonlight Sonata of Beethoven.

The magical musical evening concluded with wise words ringing in the guests’ ears. Archbishop Desmond Tutu, Adrian quoted, said “do your little bits of good where you are.” It is such ‘little bits of good’ put together that overwhelm the world. 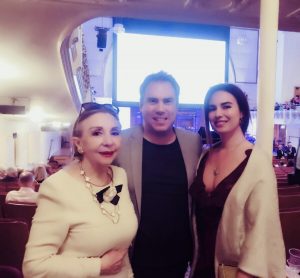