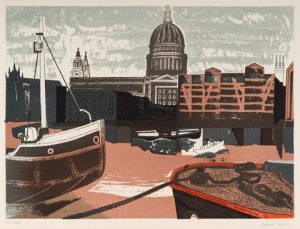 A jack-of-all-trades among 20th century artists, Edward Bawden was commissioned by leisure firms to show people relaxing. Although there was not a lazy bone in his body, he himself was renowned for his playful figuration. His humour extended to the designs he made for heavier duty clients: companies including Shell (“You can be sure of Shell”), BP, Fortnum & Mason, London Transport, and Twinings.

At last, a brimming cross-section of his workshop of multiple wonders can be viewed in one place, thanks to the research and diligence of Dulwich Picture Gallery.

Curator James Russell has agglomerated a stunning retrospective of the celebrated British artist and designer. It is the most wide-ranging exhibition since Bawden’s death in 1989 at the age of 86, and the first to examine every aspect of his 60-year career. He was a creator of imaginary worlds, inspired by stories, wartime travels abroad and by the quirkiness of the overtly mundane.

There are previously unseen works from the Bawden family private collection, and, displayed together for the first time, 18 portraits made in his years as an official war artist.

An Old Crab and a Young

According to the curator, his achievements as a fine artist have been largely forgotten, yet along with designer and landscape artist Paul Nash (1889-1946) and his close friend Eric Ravilious (1903-42) he reinvented watercolour for the 20th century. One of the aims of the exhibition is to bring their contribution to watercolour painting to the fore again.

Among 170 works, the exhibition includes studies that show Bawden’s working methods, and ephemera such as the blotter from his desk, spattered with a web of doodles. 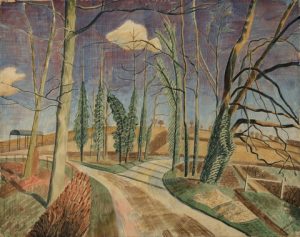 Bawden took delight in observing the world ‘off duty’, and the exhibition opens with a display of works devoted to leisure and pleasure, such as a poster (prepared in watercolour, ink and crayon) from a private collection, for the classic film The Titfield Thunderbolt. The 1953 Ealing Studios comedy, about a group of villagers fighting to keep their branch line going as British Railways tries to close it, starred Stanley Holloway, Naunton Wayne, George Relph and John Gregson.

There are early posters for London Underground and Fortnum & Mason, and book designs for Imperial Airways, and London & North Eastern Railway.

After graduating, he had worked on projects for the Curwen Press (which also employed Ravilious and Nash) and would continue to do so, including advertising, posters, book covers and wallpapers, throughout his life. Dulwich has papered two of its rooms for this show in tribute to him. The wallpaper designs were laboriously hand-printed, using lino rather than woodblocks, and influenced by William Morris, and they reached a mass audience.

He invented styles of lettering and bordering.

Paintings, such as By the Sea, 1929-30, a humorous vision of the British on holiday, show his minute observation of the everyday activities of ordinary people.

In 1931 he produced his Map of Scarborough and Panorama: The Seaside for the Pavilion Hotel in the east coast resort. They were commissioned by the hotelier Tom Laughton, brother of the actor Charles Laughton.  Seen in the picture are the hotel owner, depicted as an old salt, and the artist, and there are amusing details of boats and mermaids. 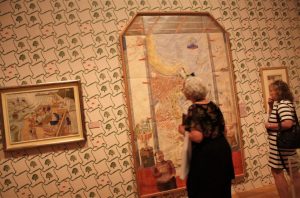 Map of Scarborough and Bawden-designed wallpaper.

Bawden became an enthusiastic gardener, and there are watercolours, engravings and linocuts devoted to plants and gardens.

He made a rare trip from home in 1935, to Newhaven, which was at that time the main port for travellers between London and Paris. He was attracted to the light and the maritime bustle and painted three studies reflecting the changing ambience of the Sussex port throughout the day. Illustrated here is one simply titled September 11am, a watercolour on paper, from a private collection.

During World War II, he served as an official war artist in the British Army, using mainly watercolour. 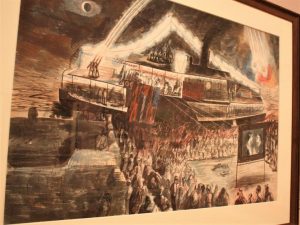 The showboat at Baghdad.

He spent 1940-45 travelling and being moved around North Africa, the Middle East and Europe. Up to this point Bawden’s depictions of the human figure were incidentals, but he overcame his feelings of inadequacy in this genre to give us portraits of Iraqi Jews, Kurds and Marsh Arabs and servicemen of African nations. In 1941, on his way home on the RMS Laconia, the troopship was torpedoed with the loss of 1,600 lives. He and a few others survived, spending some days in an open boat only to be picked by a Vichy France cruiser Gloire and taken to an internment camp in Morocco.

Appealing to Bawden’s sense of humour was a paddle-steamer which sailed up and down the River Tigris, seen in a watercolour, The Showboat at Baghdad, lent by the UK government via the Imperial War Museum. The vessel would moor and blaze out lights and fireworks to herald a variety show. This was meant to make the British presence acceptable to Iraqis. The star attraction on board was a film about sheep farming in Britain, or so Bawden claimed.

After the war, he expected to return to a comfortable life of demand for his work, but “the world had moved on.” He said: “Everyone has forgotten me, apart from the taxman.” Not true – he was becoming an elder statesman of the arts, elected as an associate of the then-conservative Royal Academy in 1946, and later appointed trustee of the Tate Gallery and Honorary Fellow of the Royal College of Art. 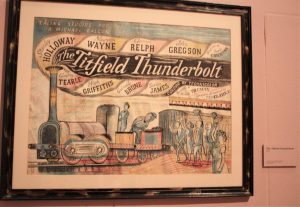 Poster for the Titfield Thunderbolt

During the late 1950s and the 1960s he produced the linocuts and lithographs for which he is best known – among them Liverpool Street Station (which has “the finest ceiling in London”) and the series Nine London Monuments. Brighton Pier is the most celebrated of these linocuts, and as part of it he sketches a rough, almost Chinese or Japanese-style image of the waves, contrasting with the rigid struts of the pier. The exhibition commentary says: “He discovered a kinship between the structure of 19th century ironwork and his cutting of lino, and in Brighton Pier found his ideal subject, exuberant and exotic but solid.”

In a colour autolithograph (in which the artist draws or traces with brush and pen directly onto stone or plate) in 1958 he created an unusual view of St Paul’s, looking at the cathedral past small boats moored on the south bank of the Thames.

British Petroleum in 1967 invited Bawden and his wife Charlotte to visit Persia, then a main base of the oil major’s operations, and the itinerary included Isfahan and the holy city of Mashhad. On his return, Bawden painted a two-panel mural entitled Fantasies on Islamic Architecture for BP’s new offices, Britannia House, in the City.

The exhibition culminates with what are in effect cartoons, and studies for murals, and the room has linocuts from his much-loved series, Aesop’s Fables. 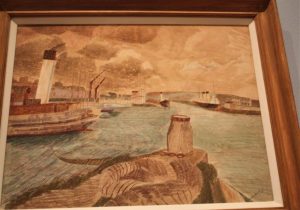 James Russell said: “Bawden’s unrivalled skill as a designer, irrepressible sense of humour and profound feeling for place flow through the exhibition, offering visitors a varied, entertaining and sometimes moving experience. I hope that every art student in the country comes to see this exhibition. I hope that families and kids come.” The same curator put together the magnificent exhibition on the life of Eric Ravilious, the most visited at Dulwich Picture Gallery in 2015. 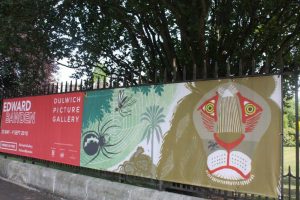 A key role among lenders has been taken by the trustees of Cecil Higgins Collection and The Higgins Bedford, which holds the Edward Bawden archive. Bawden’s association with the Cecil Higgins gallery began in 1977, when it commissioned him to design a tapestry to celebrate the tercentenary of Pilgrim’s Progress by John Bunyan, and to mark the Queen’s Silver Jubilee.

Towards the end of his life, Bawden donated the contents of his studio to the Higgins. He wanted everything left to be in one place, and the collection comprised more than 3,000 items, beginning with remnants of his early student days at the Cambridge School of Art in 1919 up to commissions from the Folio Society in the 1980s. 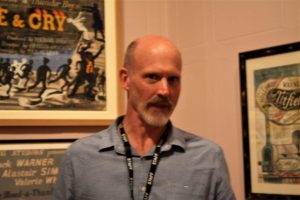 At the Royal College of Art his circle of friends included Ravilious, Douglas Bliss and Enid Marx, all tutored by Paul Nash. While still students, Bawden and Ravilious were commissioned to paint a mural at Morley College, London.

Between 1930 and 1970, Bawden was a leading member of the Great Bardfield Artists, an Essex community popular with the general public in the same way as the more famous St Ives group..

Jennifer Scott, Sackler director of Dulwich Picture Gallery, said: “Visitors can expect to be transported through Bawden’s extraordinary works to a characterful world full of humour and innovation.”

Hand-coloured block print for ‘English as she is spoke.’

Selected picture captions in detail, all © the estate of Edward Bawden:

Edward Bawden retrospective is at Dulwich Picture Gallery until September 9, 2018.