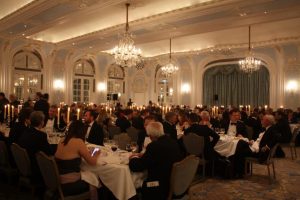 Practitioners of marine average adjusting, proud of the historic roots of their profession, are facing the future with confidence.

This was a key theme of speakers at the 2018 annual dinner of the Association of Average Adjusters. They stressed the wide geographic representation, and the age and gender diversity, of Fellows and Associates, as the organisation prepares to celebrate its 150th anniversary in 2019.

The annual dinner has been a prime fixture in the maritime, marine and legal calendar for 136 years, and since 1967 has almost every year been hosted in the sumptuous halls of the Savoy Hotel, London. 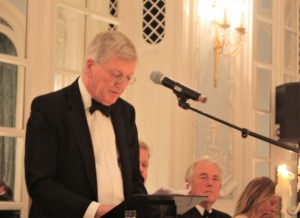 More than 220 adjusters, underwriters, insurance brokers, members of the legal profession and representatives of the London and international shipping industry, gathered on May 10 in the magnificent setting of the Savoy’s Lancaster Ballroom.

Speaker after speaker juxtaposed the distinguished traditions of general average adjustment with the modernity of outlook among current generations.

Proposing a toast to the Bench and Legal Profession, Chris Kilbee of Marine Claims Office of Asia Pte, Singapore, began by recalling that he had been employed in 1975 by William Richards, the late father of the current Association chairman Willum Richards.

From a regional perspective, Mr Kilbee declared: “Our profession demands high levels of qualification, and I do believe that Asian markets bring that to the table.”

He highlighted the diversity of Asia by listing the powerhouses in the maritime field, including India, Japan, Korea, Australasia, Bangladesh, Hong Kong, Taiwan, China, Vietnam, Philippines, Thailand, Malaysia and Singapore.

More humans live in Asia than outside it, he said, and Asia’s growth in shipping and insurance over the last 40 years had been remarkable. Some 55% of global shipping was owned there. As an example, maritime contributes 7% to Singapore’s gross domestic product, and employs more than 17,000 people. One thousand ships are in the port at any one time.

Average adjusters were the first businesses from the international maritime community to set up in Singapore in the 1970s, and by the mid-1980s Singapore and Hong Kong had become headquarters for several law firms. Lloyd’s now has more than 20 syndicates in Singapore. “There is a buzz about the region and constant change,” said Mr Kilbee.

He commended “the very fine level of professionalism that is part of the overall marine product,” adding: “We should all acknowledge the immense contribution of the Bench.” 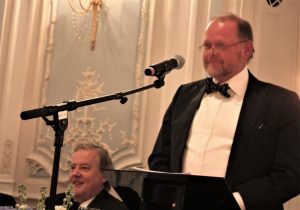 The Rt Hon Sir Stephen Tomlinson responded on behalf of the Bench and Legal Profession. Sir Stephen, who retired as a Lord Justice of Appeal in January 2017 and now accepts appointments as an arbitrator, is an Honorary Fellow of the Association. He said it had been an exciting year for practitioners of general average, for it was not often that a general average case made it to the higher courts, in this instance the Supreme Court. He was referring to the case known for short as the Longchamp, in which for the first time the English courts had to interpret the meaning of Rule F of the York-Antwerp Rules 1974, in relation to the admission of certain expenses. The Longchamp was a chemical carrier hijacked for ransom by Somali pirates in January 2009.

Sir Stephen related an oft-forgotten link between general average and great poetry. One of the leading poets of the Victorian era, Gerard Manley Hopkins, was the son of Manley Hopkins (1818-1897), a highly-regarded average adjuster and founder of a respected business in the speciality.

Gerard Manley Hopkins was renowned for his innovative concept of sprung rhythm, in which the first syllable is stressed and followed by a variable number of unstressed syllables. One of his greatest works was The Wreck of the Deutschland. This 35-stanza ode was an account of the tragic loss in December 1875 of the German iron ship Deutschland which set out for New York but was engulfed in a snowstorm and struck a sandbank in the Thames, with the loss of 60 lives including five nuns. Gerard Manley Hopkins was deeply affected by the plight of passengers and crew.

Sir Stephen continued that, with shipwrecks presumably a familiar topic in the Hopkins household, the poet wrote a further work on the theme, The Loss of the Eurydice, about a Royal Navy corvette which foundered in 1878 with the loss of more than 300 crew and trainees.

Richard W Wood proposed a toast to the guests and subscribers of the Association. The Association has, alongside its 230 members, some 580 subscribers from 26 countries who are maritime practitioners, insurance brokers, underwriters, claims adjusters and lawyers. 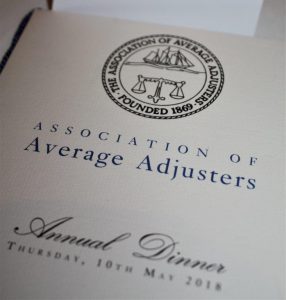 Mr Wood, a Fellow of the Association, said that when he was last invited to address an annual dinner of the body, 22 years earlier, the mood in the profession had been less confident than today. Now, “the future is bright.  This historic profession can survive. It is a strong testament that the members and chairmen of this profession and many others with us have led the Association to be vibrant, modern and – dare I say it – youthful. Youthful… and gender-mixed. Welcome, ladies, to the profession!” said Mr Wood in tribute to the growing number of female members and received a hearty cheer from all present.

“The future is strong, the future is bright, and it is secure,” he reiterated, “due to the global support, to the subscribers and to the Association. All our subscribers and all our guests are an integral part of this, without whom international commerce would not work. You here tonight make the world go round.”

Mr Wood is president of Charles Taylor Management Services – Americas (CTMSA) and Signal Administration Inc, the largest self-insured group provider of longshore benefits in the US.

Steffen Jacobsen, chief executive of Copenhagen-based Evergas a leading seaborne transporter of petrochemical gases and natural gas liquids, responded to the toast to the guests and subscribers. He said that Denmark, although appearing to be a small country, had long had a notable maritime presence, and was the sixth largest shipping community in the world. His company, Evergas, can trace its roots back to 1883.

Earlier, Willum Richards, chairman of the Association for 2017-2019, proposed the loyal toast.