Plastic pollution: cleaning the Ocean is NOT the solution 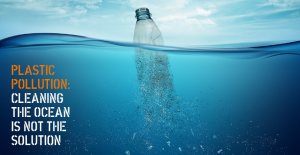 By Jeff Ghiglione, director of research in Ecotoxicology at the CNRS
and Romain Troublé, executive director of the Tara Expeditions Foundation

Social networks these days are filled with shocking pictures: plastic bags, bottles, fishing nets and other debris floating in the sea. Such images are especially effective in arousing our indignation, and positive initiatives are surfacing everywhere in favor of the ocean. But what do we really know about the plastic plague that began just 5 decades ago? What is the reality beyond the hubbub of the media?  In light of recent scientific research, the solution will not be found at sea.

Gathering and recycling trash on boats, citizens rallying for beach cleanups, giant nets collecting plastics floating on the surface: positive initiatives are multiplying around the world. They spotlight the issues and in this way contribute to safeguarding the Ocean.

But beyond the shock effect of images and the important media coverage, this hubbub acts as a smokescreen. By communicating too much about “continents of plastic” that can eventually be cleaned up with miracle solutions, we are missing the essential point.

For scientists working with the Tara Foundation, it is urgent to focus on the invisible pollution that  causes the most harm: micro-plastics. Smaller than grains of rice, these particles interact with a great number of marine organisms and represent a potential danger (just beginning to be documented) for the entire marine food chain. From plankton to our plate. 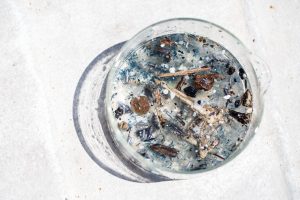 Take a look at the numbers: It’s estimated that 250 billion particles are floating just in the Mediterranean Sea! How can we get rid of such a diffuse form of pollution on a planetary scale?  Researchers have shown that contrary to the increasingly widespread idea of ​​a single “plastic continent” (a conglomerate), in fact micro-plastics are everywhere, including in the Arctic. Of course micro-plastics cannot be collected. Sailors who know the immensity of the Ocean realize that “collection” is useless considering the extent of the plague. Solutions will have to come from the land.

Aboard Tara, scientists studying plastic degradation and interaction with living organisms see no alternative but to drastically limit single-use plastics, better manage waste on land, prevent plastics from reaching the sea, ​​and invent new materials. Today, the reality is that few of the so-called “bio-degradable plastics” really degrade at sea.

Cleaning up beaches and collecting plastic in the Ocean are symbolic actions with real educational value. But it is fundamental to support research and innovation on biodegradable plastics, packaging of the future, and eco-design of products.

For the Tara Foundation — committed to this issue for the past 10 years– scientific research must motivate political decision-making and convince industry and consumers alike. Far from the clichés of the trashcan-ocean, strangling turtles and dead seabirds on beaches, our parliaments and assemblies must innovate for a circular economy. Similar to the international mobilization that successfully resolved the ozone layer problem, the G7, the UN and the European Union must make plastic pollution a question of international public health.