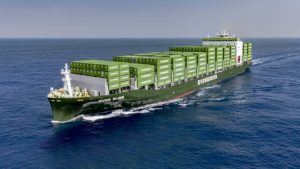 June 14, 2018 – Evergreen is expanding its container transport choices for customers between Asia and Australia by teaming up with Hyundai Merchant Marine (HMM) and APL to provide a new weekly Central & South China-Australia Express (CAE) service. Five classic Panamax ships with capacities averaging 4,600 TEU will be deployed on the new service, two will be operated by Evergreen Line and the remaining three by HMM and APL. The first sailing is scheduled around mid-August, with regular port calls at Ningbo, Shanghai, Yantian, Sydney, Melbourne and Brisbane.

CAE will augment the line’s two current weekly services (NEAX and CAT) that call at ports in China, Japan, Korea, Taiwan and Australia. The expansion in service offerings is in response to the increasing trade demand on the route. Australia’s economy is reported to have entered stable growth. The rising population, mainly from robust immigration, has not only promoted the expansion of the consumer and housing markets, but also the development of public infrastructure – all stimulating cargo demand on this trade.

In addition to strengthening the current Asia-Australia network coverage, the expanded capacity also provides shippers with more reliable service. Evergreen Line has long cultivated the Australian shipping market, establishing ‘Evergreen Shipping Agency (Australia) Pty. Ltd.’ in 2002. From its base of three offices located at Sydney, Melbourne and Brisbane, the line will continue to assist shippers to enhance their market competitiveness in the region.

Xeneta: Container shipping capacity up by 18.9% between...

New Book Published: “The History of the Shipping...