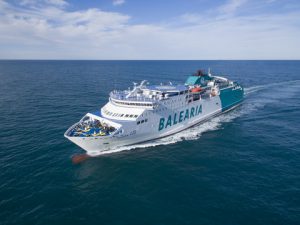 The shipping company’s expansion has been continuous ever since it was founded in 1988, and it currently operates 21 routes in five countries with a fleet of 30 ships

The Sustainable Development Goals mark the roadmap for the company, which has undertaken on a social and environmental commitment to the territories in which it operates
Baleària is celebrating 20 years since its foundation this month, committed to the energy efficiency of its fleet, digitization, international expansion and the acceptance of the United Nations Sustainable Development Goals as the roadmap to achieving economic, social and environmental sustainability.

The shipping company, which currently operates in five countries with 21 routes and 21 offices, has a fleet comprised of 30 ships including ferries and fast ferries and has carried a total of 3,700,000 passengers in the last year for turnover totaling 362 million euros.

Entering and expanding in international markets is one of the strategic cornerstones for Baleària and currently accounts for more than 24% of its passengers. Present in five countries, the shipping company operates four international routes with more than 880,000 passengers. The company’s international expansion focuses on two areas: North Africa and the Caribbean. Thus, it has two routes to Morocco (Algeciras-Tanger since 2003 and Almería-Nador since last summer) and has had a connection with Algeria for more than three years (Valencia-Mostaganem). In addition, the company also operates in the Caribbean where it has been offering a connection between the United States and Las Bahamas since 2011. “The international lines current account for 20% of our turnover. We wanted to consolidate our presence in North Africa and continue growing in the Caribbean,” underlined Adolfo Utor, Chairman of Baleària.

Baleària is also one of the world’s pioneer shipping companies to use liquified natural gas, a less contaminating fuel. To this end, it plans to add the first two LNG-propelled ferries to sail the Mediterranean sometime in 2019 as well as replace engines over the next several years in its ships so they will start using clean energy.  At the same time, the ship Abel Matutes has had the first gas energy generator in a passenger ferry in Spain since last year.

On the other hand, one of the company’s current aims to keep growing and be competitive is its digital transformation with the implementation of technological initiatives that help improve the customer experience and internal management.  “We’re developing the smart maritime concept, more eco-efficient ships and terminals that offer passengers added value due to the use of technologies and innovative processes,” explained Utor.

In June 1998, Adolfo Utor led the creation of Baleària along with other former employees of the shipping company Flebasa, which had gone bankrupt. The recently-founded Baleària committed to new technologies and fleet renovation and revolutionized the maritime sector in just three years upon the addition of the first high-speed ship connecting the Balearic Islands to the Spanish mainland, the Federico García Lorca, the company’s flagship vessel for many years.

Its commitment to high speed continued with the addition of more fast ferries all while opening new lines in the Balearic Islands and reaching other milestones such as the first line on the Strait of Gibraltar, which also marked the beginning of the company’s internationalization as it united Algeciras to Tanger. That was the year 2003, the same year of the merger by absorption of the Matutes Group shipping division which holds 42.5% of the shares.

The foundation Fundació Baleària was established in 2004 as a way to contribute to territorial social and cultural development.

Later, in 2009, a new phase began with an all-new concept: experiential travel focusing on comfort and onboard entertainment. Four new next generation ships were added to the fleet, all more sustainable and with a greater cargo capacity.

A new strategic cornerstone would begin gathering strength over the following years: entering foreign markets as a way to expand the business project. First, in the Caribbean and, later, with different routes to North Africa.

Two decades later, Baleària, which continues relying on Adolfo Utor as the company’s Chairman and the majority shareholder, is a reference in sustainability, innovation and social responsibility. The shipping company is a dynamic and competitive company whose challenges now focus on continuing with its international expansion, boosting the use of liquified natural gas as a fuel for its fleet and digitizing its processes