Top Posts
The BDI drops down to 1,540; Wets maintain...
John Faraclas of All About Shipping contributes to...
Irene Rosberg addresses the 22nd Parliamentary Intelligence-Security Forum
Ready to hit the water? So are these...
Coach Fall/Winter 2022: A Collection That Feels Like...
Badgley Mischka Fall/Winter 2022: Wearable Sculpture in Ultra-Chic...
Power, philosophy and heroism of central bankers, and...
New superyacht goes up in flames
American Club Circular no.23/22 – EU Sanctions –...
Hot Port News from GAC
Ulla Johnson Fall/Winter 2022: Organic Forms and Nature’s...
American Club Member Alert (August 12, 2022) re...
Witherbys leads the way in digitisation as 5,000...
Home HRArt and auctions Getting Away! 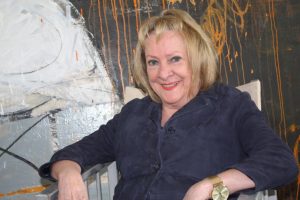 Getting Away! mid-summer exhibition curated by Day Bowman and Rebecca Fairman

There is no getting away from it: in the UK and many other countries this is the season for ‘getting away.’ Many holidaymakers would say, the closer they get to the seashore, the better.

In a lively mid-summer exhibition, premiering at Arthouse1 in Bermondsey, London, artist-curator Day Bowman and gallery director Rebecca Fairman have brought together nine artists who all, in diverse ways, incorporate notions of ‘getting away’ into their work. 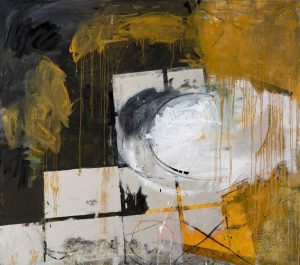 Beach holidays, ice cream treats, gaudy deckchairs, seaside sports, car trips, walking the coast and more are all referenced. The very act of travel is part and parcel of the whole experience, seen as nourishing the spirit and reconnecting with the self.

After its London sojourn, the show will ‘get away’ on tour, to the Quay Arts gallery on the Isle of Wight.

One could see the career of co-curator Day Bowman as a splendid example of independence of spirit and breaking free from the everyday routine.

Earlier in life she worked successively as a filing clerk, telesales person for The Guardian, elsewhere in advertising and in public relations. Dissatisfied with all these occupations, she reapplied for university, and took a four-year degree in education at London University and a degree in fine art at Chelsea School of Art. 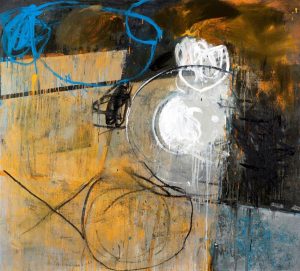 “I knew I wanted to paint but could not afford to do that full-time,” she recalls. To fund that ambition, she worked for two-and-a-half-days a week teaching piano and helping educate special-needs children. And at last settled into a studio.

Now her personal ‘getting away’ goal has been gloriously achieved. In the past 15 years she has participated extensively in exhibitions, and has collaborated with film-makers, composers and musicians to produce installations in sacred places, market squares and railway stations throughout the UK.  Among other successes, she was commissioned to produce a series of posters for Weymouth Station as part of the 2012 Olympic sailing and Paralympic sailing events, and her work was digitally produced and used in the ICCI Dome on Weymouth beach in a collaboration with the rock group Phoria. 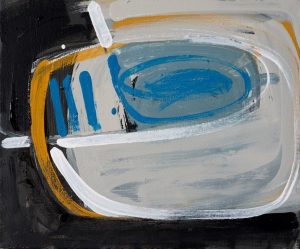 Born in Minehead, Somerset, a seaside town of Victorian vintage, Day soon made a sortie into the arts. “My parents had a little study room next to the sitting room. It was where the telephone was kept, and it was lined with big shelves.

“Most of the books looked very boring to a two-year-old, but one was covered with pink satin and I liked the texture. It was a book meant to record the progress of my childhood. At the top of each of the pink pages were cherubs. I drew on every page with crayon and coloured pencils, page after page with cherubs. My mother caught me but said it was my book, so she allowed me to colour it.”

As an adult at Chelsea she initially found the course rather boring “because it was just drawing.” The breakthrough came when one of her tutors who admired JMW Turner saw in her working something ‘Turneresque’. Despite this approbation, Day broke away from figuration to move towards abstraction and semi-abstraction. 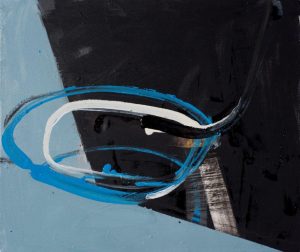 She says: “I tend to work in series: each series can take anything up to two or three years.”

In her Urban Wastelands Project (2011-12) she highlighted the detritus that surrounds cities and ports in the UK. She journeyed up the east coast and down the west coast “just discovering Britain for the first time. It was not a Britain that I knew, and I wanted to record it.”

This led in April 2016 to the multi-discipline show Edgelands, “an investigation and celebration into the forgotten and overlooked places in the edge of urban living through painting, dance, music and spoken word.” The title was inspired by the book Edgelands, in which authors Paul Farley and Michael Symmons Roberts, describe the great “unnamed and ignored landscapes…places where our slipstream has created a zone of inattention and yet where all manner of interest and beauty thrive.” This investigation of urban society was developed in her Road Trip series. 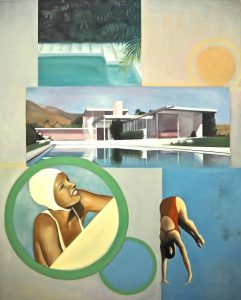 Day says of the group exhibition Getting Away! that it is about the philosophical need to go away. Although it celebrates the great British holiday, the exhibition is not glamorising the phenomenon; rather it is “talking about people’s experience.” Themes of transience and deconstruction are close to the surface.

There is always a sense of excitement and pace to Day’s layered abstract paintings – divided here into two categories, Diversions, which are impressions as if glimpsed through the window of a moving car, and two large canvases entitled Holiday Destinations, allusions to the Somerset beaches she knew and played on as a child – “an exploration in paint of place, memory and loss.”

Impressions of the seaside have stayed with her. The memories include cold, summer days when the receding tide provided vast spaces for play, castle-making and sand-marking. “Shivering in our swimsuits we picnicked on gritty sandwiches and hot chocolate from plastic cups and watched the returning waters inundate and submerge our castles and messages to the gods.”

Going Under. By Marguerite Horner.

“In this new work I have attempted to capture this sense of play, random mark-making, the tides and occasional gleam of sunshine through colour and the contrast of scribbled lines and drip marks with the large blocks of background paint.”

The catalogue cover for the show takes the plunge with a detail of the popular culture-echoing image Vacation, oil on canvas, by Lydia Blakeley. This is in her painted collage style based on ‘retro’ imagery from magazines, books, and the internet, in a process she describes as a form of escapism from the bleak realities of the day to day.

Lydia made Vacation in her studio during cold, dark winter months, and takes us back to the mid-20th century, when people were nervously looking to a brighter, promising future – a scenario which largely failed to materialise. She sees echoes of the post-war uncertainty in today’s climate of housing crisis, environmental destruction and Brexit.

In her catalogue introduction, Anna McNay, one of the most perceptive writers on the arts and herself an experienced curator, writes of the post-war popularity of holidays in the UK – in 1949, some 5m holidaymakers flocked to seaside resorts to enjoy fish and chips, gritty sandwiches, melting ice cream, light entertainment, a dip in the chilly sea, and, if lucky, a few rays of sun.

She compares that version of the idyll with the rise of package holidays to foreign destination, followed in the last couple of decades by cheap flights and the advent of digital media. She says that the traditional concept of the summer holiday has been supplanted by a more basic notion of ‘getting away’, whether on vacation, or more simply, the urge to escape from the realities, banalities and trivialities of everyday life.

The Stories we tell Ourselves. By Marguerite Horner.

Thus, time spent travelling – regardless of the destination– is both restorative and imperative.

Anna says of Day Bowman that she was greatly inspired by philosopher Alain de Botton, who has described journeys as the midwives of thought. On Day’s canvases, “these thoughts can be seen to traverse the surface – hesitating, diverting, colliding and expanding.”

Equally of considerable depth, are Marguerite Horner’s monochromatic semi-suburban paintings set in America. What could be moving images are frozen in motion, to light on transience, intimacy, loss and hope, even though devoid of overt signs of humanity.  Going Under and two smaller works, The Stories we tell ourselves and Suspended all oil on linen, resulted from a trip Marguerite made to ‘get away’ and allow herself space to grieve.

Just ahead of the Getting Away! exhibition, Marguerite was announced as winner of the British Women Artists Award 2018. One of the award judges, Alice Herrick, said of Marguerite: “Her exquisite, grisaille paintings quietly conjure profound emotion, drama and dreams, reminiscent of scenes from a Hitchcock film or the bleak cityscapes of Edward Hopper.”

Anna Barlow turns her childhood memories of tourists tucking into ice creams into ceramics that are “equally as tempting but unattainable” as they melt away.

Kitty Stirling makes fun of attempts to recreate the past by using ‘found objects’ – in this instance salvaged stripy deckchairs, representing a body resisting its own collapse. Those who have struggled to unfold a deckchair will sympathise with the feeling.

Rebecca Fairman has done commendable work in enhancing the reputation of Arthouse1 as an important contemporary arts venue within a short distance of the Thames.

The exhibition will coincide with the annual Bermondsey Art Walks and Talks on the weekend of July 21 and 22.  To round off the London exhibition a symposium of artists, writers and poets will be held on the final day, Saturday July 28 from 3-5 pm.

Quay Arts, Sea Street, Newport Isle of Wight, will host the exhibition during August and September and will, it is said, “provide a sanctuary for wet and windy summer holiday moments where visitors can experience the outside inside.”  The gallery will show in addition paintings and drawings from the Ise of Wight collection that reflect the themes of travel and holidays.

The Isle of Wight has long been one a favourite holiday destination. In When I’m Sixty-four, Paul McCartney of the Beatles sings “Every summer we can rent a cottage/ In the Isle of Wight, if it’s not too dear.”

The island was much loved by Queen Victoria and Prince Albert where their rural retreat Osborne House was built in mid 1850s; it hosted the 1968-70 counterculture music festivals and now offers an alternative to the airport crush to get to Continental destinations.

Getting Away! is at Arthouse1, 45 Grange Road, London, SE1 from July 5-28, 2018, and at Quay Arts, Sea Street, Newport Isle of Wight from August 4- September 29, 2018. More details on websites including www.arthouse1.co.uk www.quayarts.org www.daybowman.com and www.margueritehorner.moonfruit.com