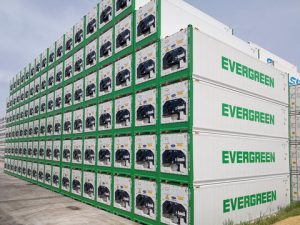 SINGAPORE, July 2, 2018 – As one of the world’s leading shipping lines, Evergreen Line, is enhancing its operations with 3,000 containers refrigerated by Carrier Transicold PrimeLINE® units, chosen for their refrigeration performance and power efficiency. Carrier Transicold is part of UTC Climate, Controls & Security, a unit of United Technologies Corp. (NYSE: UTX).