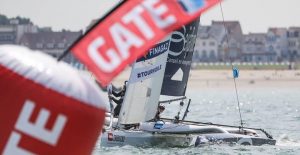 For the first time in the history of the Tour Voile three consecutive days of Stade Nautique stadium racing were contested back-to-back. If the challenge proved as tough mentally as it did physically there is just one point separating the top four teams as they leave Dunkirk and Act 1 of the 41st Tour Voile.

Valentin Bellet’s pre event favourites, Beijaflore, and the Oman Sail backed #sailingarabia are tied on exactly the same points aggregate after the three stadium Finals, but the French outfit are credited with the overall lead, and are winners of Act 1 because they won Saturday’s Final, while the Oman flagged team co-skippered by Stevie Morrison and Thierry Douillard, went 4,2,2. 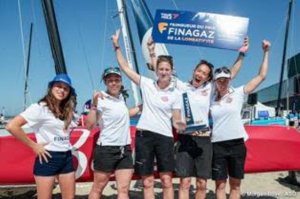 Beijaflore’s Bellet said, “We are very happy with this Act 1 in Dunkirk. We wanted to make a good start and we have done just that. Now we will see tomorrow how everyone goes on the coastal course. We are lucky to have Julien Villion with us, a specialist of this type of course.”

If anything the Oman Sail team profited from the increasing pressure and proved the most consistent across all three days. Helm Morrison along with French match racing champion Mat Richard as tactician and powerful, reliable Abdul Rahman finished fourth in Friday’s opening Final and then twice finished runners up, to Beijaflore on Saturday and today (Sunday) to Team Réseau IXIO.

Morrison, Richard and Rahman stuck to their strategy in today’s Final, making a solid start to chase Team Réseau IXIO, steered by Team France Youth’s helm Robin Follin around the first turn. With a slick first turn they opened an early gap on nearest rivals Lorina Limonade-Golf du Morbihan and were able to consolidate, protecting their lead while chasing runaways Team Réseau IXIO who actually won two of the three stadium finals but only made seventh yesterday.

Twice in the three opening days the top Oman Sail team have been in what has been the stronger of the two qualifying groups of 13. Today they had three of the stronger teams including 2016 winners Lorina Limonade-Golfe du Morbihan and Team Résau IXIO which although new has a core crew of multihull aces from Team France Jeune. And the top four finishers today all came from their side of the draw, Beijaflore – from the other side – only finished fifth today which they add to their first and third.

“My thoughts are this feels like it is going to be a very long event because I am knackered already.” Grinned Morrison, “But to start with three stadium days is mentally tiring. Our group today made it feel like every qualifying race was a stadium Final. That means you really have to push and compete, it is like a Final every race. There is a positive in that the teams from our group today were 1,2,3,4 on the day’s rankings and so we had to race hard all day.”
“Compared to previous years we have a boat which is fast enough to be right up there in the game. We are closer than we have ever been. We are in the six boats which are in with a chance of winning. The last two days we have smashed the starts which is great. You are trying to hit the start line within a metre going at 15-17kts, so it is hard.”

Sailingarabia have chosen to run a stadium team and a coastal race team, the latter comprising Douillard and Abdul Rahman will take up the baton tomorrow in Dieppe for the first coastal race of this Tour.

Beijaflore, winners of the Sailing Arabia Tour earlier in the year uphold their ranking as favourites, Valentin Bellet sailing with past 470 youth world champions Guillaume Pirouelle on the helm and Valentin Sipan as tactician, but there while they are tied with Sailingarabia so also Team Réseau IXIO and Lorina Limonade-Golf du Morbihan are also tied on the same tally as each other, just one point the leading duo. Switzerland’s Bernard Stamm on Cheminées Poujoulat is fifth.

On their first Tour Voile together, the European crew on Pink Lady-Pays de L’Or – Hérault made the Final for the first time after a much more accomplished qualifying series in the brisker, 11-15kts NE’ly onshore breeze.

Their Italian 20 year old Jacopo Rizzi summarised, “We have learned so much from these first three days but are looking forwards to the coastal race in Dieppe. The Final went OK. We had a good start on the one which was general recalled, but when we did go we were too leeward and got rolled by the fleet. It is experience for the next one. We are getting better.”

They said:
Sandro Lacan (FRA) Team Réseau IXIO: “Two wins in three days we are well satisfied. Days like this we step up. Yesterday we were disappointed with the result. But we debriefed and worked out what went wrong. And after the intensity of our qualifying we were running hot for the final. The top five are super close for the moment. Before this everyone was changing and testing things. Now it goes full on for 17 days and we have to hold on.”