The BDI (Baltic Dry Index) ended earlier on today at 1,632 points, 42 higher than yesterday “thanks” to the volatile as ever Capes. Geopolitics remain more than perplexed… John Faraclas’ daily brief:

The Capes’ BCI surpassed once …again the 3,000 point threshold – actually now reading 3,041… That’s 248 plus since yesterday when it gained just one point and the previous day when it lost  224 points… whilst on the 9th of July it lost …”only” 70 points; now if this is not volatility what is it, eh???

The Panamaxes’ BPI was up 19 points at 1,517 points, a bit contained as yesterday the gains were 67 points!

All in all a Capes Market with a bit of Panamax ..flavour. CAUTION as too much volatility might cause other side market effects which in combination with sanctions and the Trade Wars in full swing – soon, will create havoc on Planet Ocean and conversely to Shipping!

The Wets still with mixed feelings; the last published BDTI (Dirties) and BCTI  (Cleans) stood at 741 – up nine and 499 – no change respectively. Still CAUTION applies for both categories…

As mentioned Geopolitics are more than perplexed and president Trump’s visit to the Continent  for the NATO summit et al as well as to the United Kingdom today opens the Aeolus Bag of Winds with whatever this entails. But who is the real keeper of the winds today and who gives the release order???  Now do please expect two things: a conflagration in the Balkans and in the entire Middle East under new dogmas given the super powers vested interests and their involvement there in dangerous games… Did I hear you say North Korea? BREXIT BREXIT BREXIT… Add THE MIGRANTS saga which is splitting Europe in two… Time will soon tell! You have been warned! 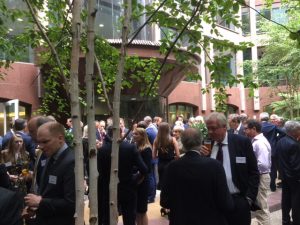 On another tone and note the Summer social business events continue in the Square Mile… Earlier on tonight we had the HFW – Holman Fenwick Willan Insurance Team Summer Drinks.

Nearly 250 guests gathered in HFW’s Friary  Court garden and together with twenty or so members from the hosts Insurance Team created a great atmosphere. All in all a great event with excellent network, well selected food and drinks for the … Mediterranean summer we witness AND excellent  sixties music in the background! 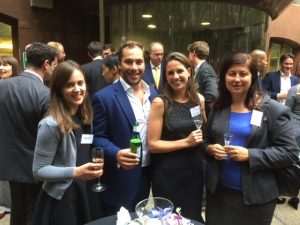 A very small world too; good to meet old friends and supporters of allaboutshipping but also meet new ones!

That’s all for now and will revert tomorrow with our Geopolitical and Market weekly news-recap; until then remain on guard from actions emanating from Pirates, Terrorists and Criminals of any kind looming in the background…