The BDI@1,774; messy geopolitics and the Greek inferno… continues 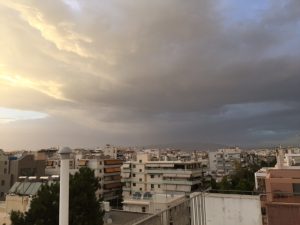 The BDI (Baltic Dry Index) was up 56 points earlier on today giving, still, some hope, but: one size cannot dictate the market, nor it constitutes one! John Faraclas daily recap:

Minimal but positive, two points plus for the Supras’ BSI now at 1,030.

Minus one for the Handies’ BHSI now reading 559 points.

All in all a Capes Market and that’s dangerous!

The Wets on an upwards mode; the last published BDTI (Dirties) and BCTI (Cleans) stood at 723 – plus four and 507 – plus seven points respectively!

The WTI as these lines are being written stands at  US$ 68.50 – good to see same below the US$ 70.00 mark and we insist that same should be maximum US$ 49.99 as otherwise expect an unprecedented and unannounced revolt by the poor masses!

Geopolitics coupled with the Trade War is already giving shock waves; and it is only the beginning!

All main major issues continue their relentless dismantle of our World; pity!

The MIGRANTS, The Wars in Syria and Iraq, Israel’s involvement given its self-defence which we have predicted given the Israeli counter action today downing a Syrian jet… Turkey’s coming financial inferno, Greece up in (real) smoke, The BREXIT saga now with Mrs. May in full command of all negos, the EU’s future in tatters, NATO under consideration if America says kiss you good bye! North Korea beginning to dismantle its uranium factories and missile launchers and centres…

The Greek inferno death toll stands at 74 with 174  injured,  but many are still missing – it might be a dreadful number. The Wildfire at Gerania Mountains is going from worse to worse… One thing to mention is that forest truck roads were minimal and in many cases NOT existing!

Greece is in a three day of national mourning. The  UGS – Union of Greek Shipowners, through a statement by its president Theodore El. Veniamis – who is also the president of Syn-enosis – the charitable organisation supporting those in need, will explore the best ways to support the victims of this despicable disaster.

The Society has just been advised of the following news regarding a first reaction by the London Greek diaspora:

Assistance from the Greeks based in London for the victims of the wildfires in Greece to raise food and basic needs items.

In cooperation with the Greeks that are working at the Imperial Hospital there have been created 2 collection points in Central London, in order to gather emergency supplies, such as clothes for adults and children, underwear, socks, shoes, medicines (antiseptic and for burns), sanitary pads, toothbrushes, toothpaste, tinned food.

For any further information when you are at the collection point you could email: sofia.katrantzi@nhs.net.

As the situation is still getting worse be prepared for everything. The Security Services, the Police, The Hellenic Coast Guard, the Doctors  with all available medical personnel and Hospitals, the Local authorities, the  EU, the World at large and the Greek public are doing the heroic utmost best to assist all those in  need in any way they can.

That’s all for tonight and continue to be on guard for every eventuality emanating from Pirates, Terrorists and Criminals of any kind whatsoever wherever you are on Planet Ocean!

Music for the Soul