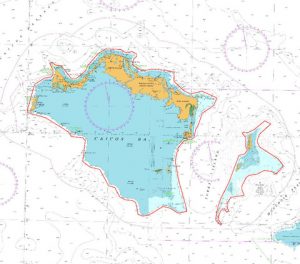 LONDON, 13 August 2018 – The most comprehensive seabed mapping survey of the seas surrounding the Turks and Caicos Islands (TCI) is currently being conducted by the UK government’s UK Hydrographic Office (UKHO). Mr. Ian Davies, International Hydrographic Programme Manager from the UKHO, visited the islands from the 23– 26th July at the start of a major seabed mapping (hydrographic) programme across the Turks and Caicos, and met with local officials from the Maritime Authority, Ministry of Environment Ports and Survey and Mapping Department.

The Turks and Caicos Islands has international obligations under the International Maritime Organization’s (IMO) Safety of Life at Sea (SOLAS) Convention to ensure that its navigable waters are sufficiently surveyed to modern standards, and that fit-for-purpose navigational charts and publications are produced and provided to professional mariners. Whilst the ADMIRALTY Maritime Data Services portfolio of existing navigational charts and publications are produced by the UKHO on behalf of the TCIs, a significant percentage of TCI’s waters have either never been systematically surveyed, or were last surveyed nearly over a hundred years ago.

In January of 2016, the IMO commenced its mandatory audit programme of SOLAS. This is especially relevant to those states and territories that operate shipping registries, such as TCIs. If nothing is done to rectify the shortfall of modern seabed mapping in TCI’s waters, the audit may record a non-conformity, which will have negative economic knock on effects for the shipping that serves the territory.  Besides the potential legal, political and economic impacts, the lack of up to date seabed mapping poses a real risk to the safety of shipping and would have associated environmental consequences in the case of a maritime incident.

As part of the UK governments Sovereignty Defence & International Obligations Programme (supported by the Conflict, Security and Stabilisation Fund), the UKHO is working with Territories to identify survey priorities, and where possible arranging for these surveys to be conducted. The survey data will then be used to update the respective navigational charts. The survey will be conducted from July through to mid-September, and costs in the region of £1,000,000 to complete. The associated positive economic benefits of hydrography are clear with the average return of approximately £7.50 for every £1.00 spent. However, this ratio can exceed 1:250 for more remote, more geographically challenged and less developed coastal states.

The bathymetric LiDAR (light detection and ranging) survey consists of a specially modified light aircraft fitted with state of the art sensors, which use a laser to accurately measure the depth of the water. It will fly at low altitude over the shallow water areas in a systematic grid in order to cover the entirety of the survey area. The system that is being used is safe to humans, animals and the natural environment, and is common and certified for this type of application.
Later this year, the UKHO will be conducting a boat-mounted hydrographic survey, and combined with this LiDAR survey, this essential work will mean that the TCIs will be amongst the most well surveyed Territories or island nations in the world. 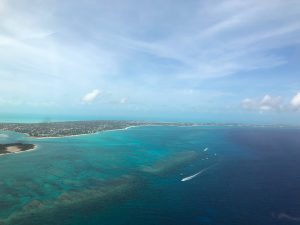 Data from these surveys can inform the sustainable use of TCI’s valuable marine resources, and the presence of this dataset will act as an enabler and accelerator for the development of the Islands ‘Blue Economy’.
Like previous surveying in the Caribbean, we would expect a number of previously uncharted features to be identified, including uncharted wrecks. Mr. Davies said that it is really exciting that such a complete picture of the waters of TCIs will be acquired, and that this valuable dataset is expected to be used to support a number of other crucial activities, such as inundation mapping and coastal planning.

The Permanent Secretary of the Ministry of Tourism, Environment, Heritage, Culture and Gaming Cheryl-AnnJones, stated:

“This survey programme being undertaken by UKHO and its contractors gives the government of Turks and Caicos the opportunity to completely survey the waters surrounding the islands, supporting greater navigational safety and assisting the territory in fulfilling its international maritime obligations whilst aiding in disaster recovery and future development both on the islands and in the waters surrounding them.”