Full speed ahead for Triton 5 project 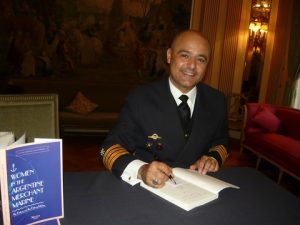 The latest episode of the Project Triton book and cartoon series will be launched in October 2018 in Buenos Aires, Madrid, Athens and the Norwegian city of Tromsø.

It will be the fifth edition of Project Triton, an initiative with the aim of awakening in children their interest in the world of shipping – through an early stimulus that gives them basic but fundamental knowledge to develop their awareness of the industry.

The background is that for several years now, the International Maritime Organization has been proposing strategies to help solve the growing deficit of applicants for maritime careers including merchant marine officers.

In the words of the former IMO Secretary General Koji Sekimizu there is a need to “fertilise” the field of adolescence and youth to provide a solution to the problem.

The author of the Triton project, Horacio Vazquez Rivarola, speaking to allaboutshipping, argues that “to obtain fruits, we must certainly fertilise, but to do that the seeds must be sown…” That is – precisely – what this educational project sets out to do, said Mr Vazquez Rivarola, who a merchant marine officer and has a PhD in communication sciences.

The previous four episodes of books and cartoons have been presented at more than 30 maritime institutions in 20 cities: in Argentina, Spain, Peru, Great Britain, Cyprus, the United Arab Emirates, Greece, Georgia, the Netherlands and Turkey. The global launch of Triton 5 will take place during the annual meeting of WISTA International in Tromsø. The new “Triton Tour” will be strongly featured at events in cities including Madrid and Athens.