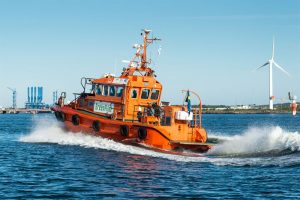 Hamburg, 4 September 2018 – The Compression ignited methanol engine will be launched at the SMM exhibition in Hamburg starting this week. The first delivery to client for full scale operation is scheduled for January 2019. Both engines are based on Scania 13L marine diesel engine and can be delivered either for variable speed (propulsion) or single speed genset applications.

Methanol provides significant benefits compared to oil-based fuels such as diesel. The emissions of nitrogen oxides, sulphur oxides, and particles are considerable reduced. Change over to methanol will improve air quality which is particularly important in densely populated areas with heavy traffic.

A comparison of estimated annual emissions of the pilot boat fleet for MGO and methanol for GHGs, NOx, SOx, and particulate matter showed that reductions in the range of 90% could be achieved with the use of renewable methanol produced from pulp mill black liquor. For methanol produced from natural gas, a fossil feedstock, greenhouse gas emissions are similar to those from MGO fuel. Renewable methanol can be produced from forest and agricultural waste products as well as many other types of organic waste. Methanol from captured CO2 and hydrogen is also a feasible alternative.

Replacement of fossil fuels with renewable methanol in this segment will reduce the greenhouse gas emissions substantially in coastal and inland waters. The outcome of GreenPilot aligns with the UN’s sustainability goals connected to urgent action to combat climate change, sustainable use of the oceans and making cities resilient and sustainable.

ScandiNAOS AB is the world leader in system design and engine development for methanol in shipping and has been the technical coordinator for several methanol projects. ScandiNAOS led the design work for the conversion of Stena Germanica to methanol operation in 2015 and has provided the methanol engine and modifications of the onboard system for the GreenPilot project.

PortNews launches voting on issues to be addressed at SMM’s Marinet Conference in Hamburg, Sept 5