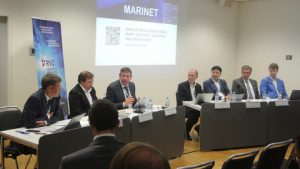 The Marinet Conference on the most promising maritime high technologies held at SMM 2018, Hamburg on 5 September 2018 gathered representatives of international companies and scientific centres.

The Conference programme included panel discussions on digital navigation and unmanned shipping as well as maritime robotics fest.
Aleksey Donskoy, General Director of Engineering Center of Shipbuilding (ECS) who was speaking at the conference told about the successful project of Air & Marine Electronics (AME) on creation of an unmanned boat and conversion of the developed technologies for civil shipbuilding. AME in conjunction with ECS plans to launch pilot projects on testing autonomous navigation and remote control systems beginning this year and through 2019, dealing consequently with a sea/river bulk cargo ship, a small-tonnage tanker, and finally with a ferry and an icebreaker.
Aleksey Rakhmanov, head of United Shipbuilding Corporation told about the beginning in 2018 of the construction of an innovative unmanned vessel at Sredne Nevsky Shipyard (part of USC).
According to Aleksey Rakhmanov, implementation of unmanned ships projects are possible only after solutions are found to principal issues of international cooperation.  He believes it is important to define common principles of onshore infrastructure development, work with prototypes and models.
Vitaly Klyuev, representative of Federal Marine and River Transport Agency (Rosmorrechflot), told in his turn about intense development of regulatory frameworks for unmanned shipping being carried out in Russia. The expert expects the regulations as early as in the beginning of 2019. So, Russia is to be the first or among the first countries to create legal platform for autonomous and remotely operated vessels.
“As of today, there is no international definition of an unmanned ship or its categories, current regulations are based on presence of people onboard” said Vitaly Klyuev.
The discussion participants came to a conclusion that among the key factors ensuring fast development of unmanned shipping are regulatory framework and infrastructure with a significant role to be played by state authorities and international regulators.
Air and Maritime Electronics (AME)Aker ArcticDANAOS Management ConsultantsEngineering Center of Shipbuilding (ECS).GermanyHamburgKorea Research Institute of Ships and Ocean Engineering (KRISO)Kronshtadt TecnologiesRussiaShipServSMM 2018United Shipbuilding Corporation (USC)
0 comment
0
FacebookTwitterLinkedinEmail