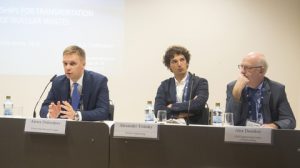 Russian companies have presented their projects on design and manufacturing of maritime robotics at the Marinet Conference organized in partnership with PortNews Media Group held in Hamburg as part of SMM 2018, September 5.

Aleksey Donskoy, General Director of Engineering Center of Shipbuilding speaking at the event told about the successful project of Air & Marine Electronics (AME) on creation of Triton 2, a heavy duty work class ROV. The device is equipped with a sensor, a camera, and system for searching and positioning of underwater objects. The ROV can be operated at a depth of 500 meters with cargo lifting capacity six tonnes. The underwater vehicle is fitted with a complex of gydravlic manipulators for underwater operations. 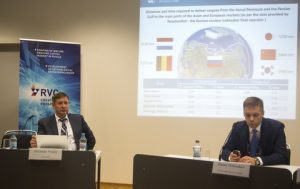 Alexander Pinskiy at the podium; to his right Aleksey Dobrodeev

Alexander Troitsky, CEO of Nonius Engineering told about successful experience in development of unmanned dredgers. He believes the robotics for dredging sector applications should be further developed in the future.

“The market of robotized vessels will grow considerably within a decade. First of all, robotics will be most applicable for aggregate dredgers… Robotics is the real future, it is coming and we should be prepared. We should start today, otherwise tomorrow we’ll lose to somebody who is more prepared”, Alexander Troitsky was quoted as saying.
However, the discussion participants acknowledged several challenges, both technological and commercial, to be solved in the segment of dreging sector’s robotics.
Aleksey Dobrodeev, a representative of Krylov State Research Center, told about KSRS studies related to creation of unmanned ships capable of transporting cargo along the Northern Sea Route in ship convoys led by an icebreaker. He emphasized that the idea was driven by construction of powerful icebreakers designed to break through Arctic ice at commercial speed cutting a path for such unmanned vessels.
“Having powerful icebreakers will enable us to develop a concept of unmanned cargo carriers that would follow such an icebreaker in a broken channel”, said Aleksey Dobrodeev.
“An additional advantage of unmanned ships is that these technologies can be used for transportation of hazardous cargo, in particular radioactive materials, with a reduced level of biological protection”, added the Krylov Center representative.
The Marinet Conference on the most promising maritime high technologies held at SMM-2018, Hamburg on 5 September 2018 gathered representatives of international companies and scientific centers. The Conference programme included panel discussions on digital navigation and unmanned shipping as well as maritime robotics fest.
GermanyHamburgMariNetRussiaSMM 2018
0 comment
0
FacebookTwitterLinkedinEmail