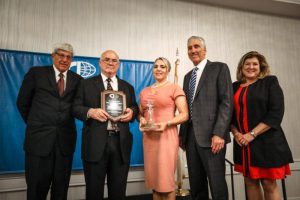 Long Beach, CA (September 21, 2018) – Edward Anthony DeNike, president of SSA Containers, a division of Carrix, received the 2018 Connie Award presented by the Containerization & Intermodal Institute in Long Beach, CA, on Tuesday, September 18. In addition, CII presented nearly $20,000 in scholarships to students pursuing careers in logistics and supply chain as well as organizations who are training the future leaders of the industry.

Mr. DeNike was honored with the prestigious award for his contributions to containerization and international trade and transportation industry over the course of the last five decades.

The dinner event honoring Mr. DeNike was held at the Long Beach Renaissance Hotel. Ronald J. Forest, President of Matson Navigation, presented the award in front of over 250 people. This event was held in conjunction with the IANA Intermodal EXPO.

“It is no surprise that our recipient, Ed DeNike–an industry legend–has attracted a record-breaking crowd. This speaks well to CII, the prestigious award, the entire Los Angeles and Long Beach transportation community and the honoree himself,” said CII President, Michael DiVirgilio.

Mr. DeNike began his career in 1966 with Crescent Wharf & Warehouse. He became a member of the SSA management team when SSA purchased Crescent in 1983. He managed numerous waterfront operations since his initial hiring and has worked in all major ports on the West Coast in all types of cargo operations. Mr. DeNike was the architect and terminal manager for several major facilities in San Francisco, Oakland and Long Beach.

“For me, being on the waterfront wasn’t a job, it was a way of life,” said Mr. DeNike during his acceptance speech. “Throughout my 52-year career-from my first days as a 20-year-old on the waterfront to my current role with SSA–it has always been about the amazing people who make this industry so special.”

In addition to his responsibilities at SSA Containers, Mr. DeNike serves on the board of the Pacific Maritime Association.

SCHOLARSHIPS
The Containerization and Intermodal Institute’s mission is to promote and support education for the trade and transportation industry. At the event, CII continued its industry mission by presenting 14 scholarships during a pre-event reception. Since 1992, under the auspices of CII, more than $900,000 in scholarships has been awarded. The following scholarships were presented:

CII, founded in 1960, has been presenting the Connie Award since 1972 and it has become the most coveted honor in the field of containerization and its ancillary industries. Among some 40 recipients to date are Robert Curry, Sr., John McLaurin, Richard Steinke, Matthew Cox, Rick Gabrielson, James McKenna, Paul F. Richardson, Captain S. Y. Kuo, Ronald Widdows, Jon Hemingway, Thomas B. Crowley Sr., Malcom McLean and Evergreen Group Chairman Dr. Y. F. Chang, among others.

The Connie Award luncheon on the east coast will be held in Newark, NJ, on December 10th at the Renaissance Newark Airport Hotel.

OI 2019 Americas: The marine technology community wants to hear from you