Last chance to nominate for the 2018 Greek Shipping Awards 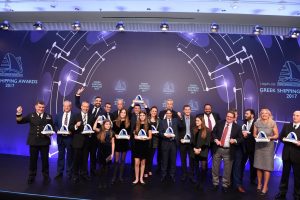 Last chance to nominate for the 2018 Greek Shipping Awards

Only one week remains for entries to be submitted for this year’s Lloyd’s List Greek Shipping Awards and the pace of the submissions has increased as it always does at this time of year.

Nominations close on Thursday October 18 for the 2018 awards, which once again are supported by a host of industry organisations and sponsors headed by lead event sponsor ClassNK.

For long-term shipping players, turbulent, even depressed, spells in the industry always mean there will be winners and losers. At such times the task of deciding criteria for adjudicating the year’s most award-worthy performers if anything becomes tougher.

That is part of the job of the independent judges who will decide the winners of this year’s Greek Shipping Awards, and this year’s panel of luminaries looks more than capable of applying high standards and taking tough decisions.

Making their first appearance on the judging panel are president of the European Community Shipowners’ Associations Panos Laskaridis, chairman of the Green Award Foundation Dimitrios Mattheou and president of Hemexpo Eleni Polychronopoulou.

More than 70 prominent personalities from Greek shipping have taken part in the awards judging panel, which is refreshed each year. Over 170 trophies have already been presented at the event, now in its fifteenth year, which has established a reputation as the largest international maritime awards ceremony worldwide. This year’s awards dinner will be held at the Athenaeum InterContinental hotel in Athens on Friday December 7.

The awards always attract a high number of very competitive nominations underlying the strength in depth of the Greek shipping community, while audiences at the presentation dinner have averaged 1,000 leading shipping personalities and their guests.

The opportunity to nominate is flung open to anyone connected with shipping, from the most prestigious owner to the humblest clerk, and in exercising their objectivity down the years the judges have played a key role in establishing the awards’ reputation for fairness and credibility.

The judges can only select winners from those nominated in writing by the deadline of Thursday October 18. You can nominate on-line via the website www.greekshippingawards.gr.  Nominations for the Greek Shipping Awards are also accepted by simple email or fax (email: office@greekshippingawards.gr; fax: +30 210 4291196)

Remember to provide reasons why your candidate would make a deserving winner.

Sponsored by the Tsakos Group

Award for Achievement in Education or Training

Award for Achievement in Safety or Environmental Protection

The Next Generation Shipping Award – NEW

* Denotes awards not decided by the panel

AWARDS NOT OPEN TO OUTSIDE NOMINATIONS

Greek Shipping Newsmaker of the Year*