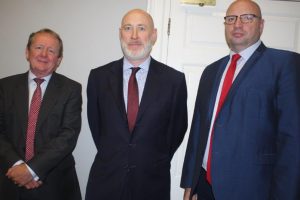 The Nordic Marine Insurance Plan will continue to operate in a spirit of compromise and consensus amid modest amendments expected to emerge from the latest regular review of its clauses, the autumn 2018 seminar in London of the Association of Average Adjusters heard.

John Martin, managing director of Gard (Singapore) Pte, said he understood that the three-yearly update of the Plan would amount to “just tweaks” that would reinforce the marine claims schedule that is popular in the Scandinavian market. Gard is a strong supporter of the Plan.

Mr Martin, a Fellow of the Association, referred to the Plan as “the hallowed book of Norway” adding that it was a standard feature throughout the region and beyond.

He was speaking at an AAA meeting organised in conjunction with the International Underwriting Association to offer briefing on the perceived advantages and challenges of handling and adjusting claims under the Nordic Plan and what the potential 2019 revisions might mean.

The Plan, which covers hull and machinery, hull interest, freight interest, loss of hire, war, builder’s risk, small craft and offshore and energy, is an “all risk” product with specific exclusions, as opposed to defined named perils. The ‘claims lead’ function is clearly defined and there are no ‘warranties’.

While advocates of the Plan say it is increasingly the policy form of choice for quality fleets, much of the expertise for handling and adjusting claims has tended to reside in Norway, and many claims handlers and adjusters elsewhere “have to reach for their often well-worn copy of the Commentary on the Plan for guidance,” it was suggested.

Mr Martin said that the basis for the Plan [which arose from the Norwegian Marine Insurance Plan of 1996, a successor to policy formulas dating from 1867] was an agreement in 2010 between the Nordic Association of Marine Insurers (Cefor) and the shipowners’ associations of Denmark, Finland, Norway and Sweden.

He said that a standing revision committee reviews the Plan, involving in the process shipowners, adjusters, insurers and academics. Mr Martin described the process as “open and transparent – – other parties, in particular brokers, can also make comments and suggestions to the participating parties.”

The 158-page Plan is accompanied by a 500-page Commentary which expands on the meaning of the clauses, sets out examples of how they are applied, and is of equal standing to the main document. “The intention is to be comprehensive,” said Mr Martin.

He insisted: “The emphasis is on consensus. Norway has a small population but a big role in shipping, and members of the shipping community know each other well. Compromise is part of the plan, entailing much discussion with the insurers.”

Among the likely changes for 2019 is an extension of coverage under the Loss of Hire section for extra tugs employed after a casualty to facilitate sailing such as while a thruster is out of order.  This would be quite popular among those who take loss of hire cover, said Mr Martin.

A standard automatic reinstatement clause is introduced (more than 90% of loss of hire policies have such a clause in any event), and “now you will have to exclude the clause if you do not want reinstatement,” said Mr Martin.

The ordinary trading area in Pacific/east Asia is to be extended, in the light of ships accidentally running into a conditional area in winter time.

Once the assured has shown that he has suffered physical damage or loss within the insurance period, the onus of proof is on the insurer to show that an exclusion applies, in contrast to the English conditions, the Institute Time Clauses (Hulls).

On the question of loss, instead of the term abandoned, there is ‘condemnation’.  A vessel is condemnable when the cost of repairing casualty damage exceeds 80% of insurable value or the value of the ship after repairs, whichever is the higher. The assured has the choice of whether to repair the vessel, but if the assured decides to repair a vessel that is condemnable, insurer’s liability is limited to the sum insured, less the residual value of vessel.

Mr Martin said that in this context it should be remembered that the insurer is liable for up to three times the sum insured plus interest and costs. A clause entitles the insurer to attempt to salvage the ship at his own expense and risk. If the assured requests condemnation, the insurer may after salvage demand the removal of the ship to a place where the damage may be properly surveyed.

If the ship has been damaged without the rules relating to total loss being applicable, the insurer is liable for the costs of repairing the damage.

The important principle and starting point is that the insurer is liable for restoring the vessel to the condition it was in before the occurrence, subject to the requirement of reasonable repair time as against “unrepairability”. The assured may claim compensation for unrepaired damage when the insurance period expires, but there is no compensation for unrepaired damage if the vessel becomes a total loss before policy expiry.

The provision for interest on claims was referred to by Mr Martin as “a big selling point of the Nordic Plan,” which stipulated Libor +2%: “it is a very nice thing to have,” said Mr Martin. For US dollar policies incepted in 2018 the figure is 3.7% per annum. The Institute Time Clauses (Hulls) which are subject to English law and favoured by the London market, has no equivalent.

The Plan had, said Mr Martin, “a great formula to expedite repairs.” There were possible cost savings for the insurer and assured through postponement of permanent repairs by moving to a cheaper repair yard or one where repairs could be carried out more quickly or carried out concurrently with owner’s scheduled work.

Among the adjusting challenges, if the assured causes a casualty through gross negligence there is a progressive reduction in liability based on degree of fault and circumstances generally. This would be often based on the adjuster’s discretion.

Safety regulations, a ‘new’ concept, had replaced that of seaworthiness. This involved any rule on loss prevention and safety issued by a public authority, by class or stipulated in the insurance contract.

Mr Martin said that there was little case law relating to the Plan “because it is very much in the nature of the Nordic market to compromise. They just do not have this body of law you have in the English context.”

Gard, one of the largest blue-water insurers, with gross written premium of $775m at August 2018, covers some 11,000 vessels in more than 50 countries, taking the claims lead on 6,158 of them. On the most recent figures, of these, 42% were insured on Nordic Plan, and 27% on Institute Time Clauses (Hull).

Mr Martin said that the Nordic Plan was Gard’s preferred choice of insurance product for all covers, mixed with a flexible approach on other conditions.

Mr Martin began his career in London in 1989 with Richards Hogg Lindley Average Adjusters, working in Australia, Taiwan and Hong Kong before joining Gard Hong Kong in 2003.  From 2011 he spent three years as director for claims at Gard Japan, moving to Singapore in 2014 to set up Gard’s new office there.  Besides running the Gard Singapore office, he heads its protection and indemnity and hull and machinery claims units.

The AAA/IUA meeting was chaired by Keith Jones of Aon Risk Solutions, a Fellow of the Association, and opened by Paul Calvert, a senior market services executive of the International Underwriting Association.

The Nordic Plan and its Commentary is available at http://www.nordicplan.org/

Greek shipowners strongly support the forthcoming discussions at the UN IMO for effective implementation and enforcement of the 2020 0.5% global sulphur cap