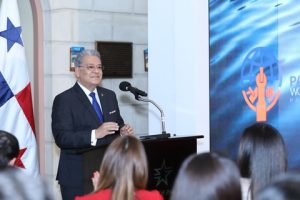 On Thursday, October 25 at 10:00 am, the public launching of the Panama Maritime XIV World Conference & Exhibition was held at the lobby of the Panama Canal Administration Building –with the magnificent paintings of the construction of the Canal as a backdrop and surrounded by impressive views of the Panamanian maritime conglomerate, the ports, the railroad and the maritime ancillary services.

In addition to the members of the Organizing Committee, chaired by Captain Orlando Allard, were present Jorge Quijano, Canal Administrator and His Excellency Jorge Barakat, Minister for Canal Affairs and Administrator of the Panama Maritime Authority. Also present were several ambassadors, presidents of professional organisations and businessmen from the different sectors that make up the Panamanian maritime conglomerate. 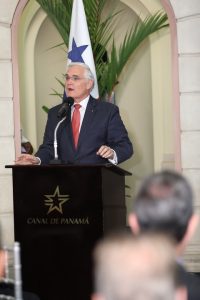 The Panama Maritime XIV World Conference & Exhibition will be held from March 17 to 20, 2019 at the Megapolis Convention Centre in Panama City. The main theme of the conference is “Taking advantage of the evolutionary trends of the industry: a more ecological, digital and autonomous maritime industry”.

During this edition of Panama Maritime celebrations will be on hand to celebrate the 500th anniversary of Panama City – 500 years of offering logistics services to the world – from the Portobello Fairs – to the expanded Canal and the regional logistics platform it has become today. The year 2019 is also a general election year in Panama –so the programme could not miss a conversation with the presidential candidates so that they have the opportunity to present their vision of Panama and how to realize the dream of becoming a true regional logistics platform.

The main Focal Points of the Conference are:

As in the past, Panama Maritime 2019 will also have an Advisory Board made up of international experts on issues related to the Focal Points. Important figures have confirmed their participation, including: 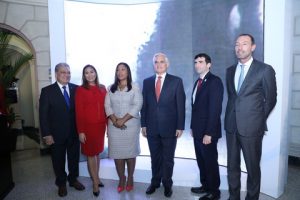 The Honourable Mr. Kitack Lim, Secretary General of the International Maritime Organization (IMO) will open the conference and exhibition and address the audience on pressing issues at IMO, including the new regulations that emanate from the MARPOL Convention to increase the efficiency of ships and protection of the environment.

The Canal Administrator will provide an update on how the expanded Canal behaves in terms of revenues and market share – and how the Canal contributes to the consolidation of Panama as a regional logistics centre. The Administrator of the Maritime Authority will give us his vision of the next 100 years of the Registry, as well as the development of port infrastructure, such as the maritime ancillary services wharf and the new cruise terminal.

Tara back from Pacific expedition with startling data: motley map of reef health