The BDI fell below the 1,500 threshold earlier on today and now reads 1,490 – that’s minus 23 points, 23 important and otherwise valuable points. Geopolitics still messy, enigmatic and above all perplexed… John Faraclas’ daily briefing:

The Capes’ BCI lost 34 points and now stands at 2,596… Volatility and uncertainty at its best!

Minor losses, but losses for the Panamaxes; the BPI lost six points and now reads 1,524…

All in all a downwards Dry Market; 757 points apart from the end of December 2013 when it stood at 2,247 points!!! The BDI is nearly five years below the 2,000 point threshold! This is the harsh reality! Add the fact that shipping is heading towards becoming shipping for the very very very few and see what you get!!

The Wets lost ground too; the last published BDTI (Dirties) and BCTI (Cleans) stood at 1,150 – minus three points and 567 – minus four points respectively…

The WTI as these lines are written stood at US$ 65.10… A good sign but still a long way to go for the safe side being that of US$ 49.99 MAXIMUM! The 2020 and many more other issues – over-regulation… will make shipping a real adventure for the tough ones only; end of the story!

On the Geopolitical issues which tend to blow up the entire Planet Ocean will revert just before meantime. 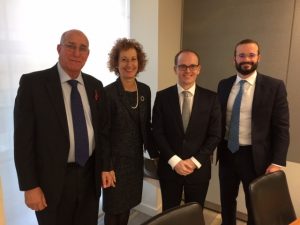 On another tone and note we had two interesting events today; a lunch time meeting with the IMIF  and an evening one with the ministers of Diaspora from Egypt, Cyprus and Greece…

A full house at Stephenson Harwood’s auditorium in its Finsbury Circus HQ’s listened to Simon Moore and Paul Hofmeyr on the “The Supreme Court’s “B ATLANTIC” Judgment and the Implications for Insurers and Shipowners” case.

What an account that was by both speakers and we will revert with a full write up! The event was introduced by IMIF’s chairman  Alan McCarthy and attracted just over 35 delegates representing the entire maritime spectrum. 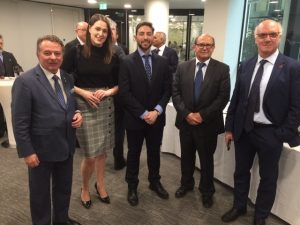 Even before the excellent slides presentations there was quite an interesting networking on the issue; food for thought …“competing” with the excellent buffet and drinks offered by the hosts… We heard that the next meeting will possibly be on the Greek saga – now a ten year old encounter for all… Watch this space!

Early in the evening we gathered at Europa House in Smith’s Square for a special reception on the occasion of Greece – Cyprus – Egypt Diaspora meeting “Nostos”, Nostos 2 in particular being the second such gathering following the fisrt one in Egypt. Over 300 guests from all sides of the United Kingdom’s Diaspora, mainly Cypriots as well as Greeks and Egyptians participated. The historical links between these three nations are not just centuries old but over many millennia  – if you search you will be surprised. Medical tourism et al as well as encouraging tourism from Diaspora to the metropolis’ of these three nations is a must!. 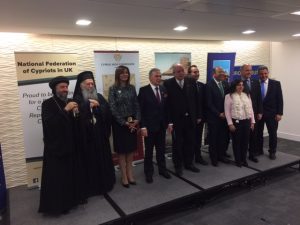 The three ministers, the Clergy, Diplomats and organisers.

As the Greek minister Terence Quick put it very simple: “Come to Greece and bring a friend along” now makes waves… In his brief five minute speech although he said same was a forty minute one, amongst others he congratulated Ms Kiki Sonidou for her initiations in the medical front and medical tourism for events taking place mainly in Greece and the UK!

Interesting briefings but very warm  statements too by the Egyptian Minister Ms Nabila Makram and the Cypriot Commissioner  to the Cypriot president Fotis Fotiou. 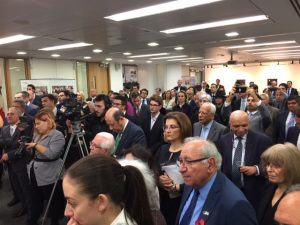 Nice hand made dips with excellent wine kept us all talking until nine… We had also to see the interesting exhibition of Touristic places in all three countries and collect interesting and very informative booklets!  As said 300 attended the reception; who wasn’t there!  Will revert with a full account.

With the forthcoming World Travel Market in London’s ExCel next week this will be a great chance to see things moving and I am sure Greece’s minister for Tourism Elena Kountoura is fully geared for this! Last but not least all three nations mentioned they have enhanced their cooperation in nearly all fields: Business, Defence, Energy, Safety and Security in a very turbulent neighbourhood! Given our hundreds of articles and speeches on the region – Balkans, Black Sea and Eastern Mediterranean we fully support these initiatives which can strengthen Peace in the region or at worse deter unwanted situations by Turkey stirring up the above mentioned region and beyond.

Reverting before midnight with the Geopolitical mess, until then remain on guard from actions emanating from Pirates, Terrorists and any Criminal whatsoever wherever you are on Planet Ocean!  Happy Hallowe’en !!!

Churchill: Walking with Destiny reviewed by a leading medical biographer

The Journey of Light into the Dark