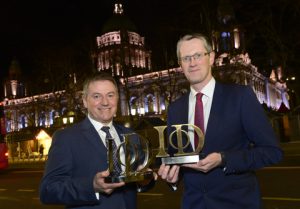 The Institute of Directors (IoD) is inviting business leader from across the export and shipping sector to enter the prestigious IoD NI Director of the Year Awards 2019.

The awards seek to honour the best performing directors in the private, public and third sectors across the region, but also afford business leaders the opportunity to be recognised on the national stage.

Entries and nominations for the awards, which are sponsored by First Trust Bank, open this Friday 16th November.

“With the high calibre of entrants and nominations received each year for the IoD NI Director of the Year Awards, it is unsurprising they are considered among the premier accolades available to local business leaders.

“The awards form part of the wider IoD Director of the Year Awards, so category winners are also put forward to be shortlisted for the national ceremony, where Northern Ireland directors have enjoyed unrivalled success in recent years.

“Congratulations this year went to Gary Thompson of the Northern Ireland Fire and Rescue Service and Denis Lynn of Finnebrogue Artisan who collected the UK Director of the Year awards for inclusivity and innovation, respectively.

“They, along with our other 2018 category winners, showcased the very best of Northern Ireland businesses and proved the tremendous wealth of talent present among our local leaders.”

“This is our call on inspiring business leaders and entrepreneurs across Northern Ireland to help shine a light on the importance of impactful leadership to both our economy and society, by entering the 2019 ‘Director of the Year’ Awards.

“Against a backdrop of political uncertainty, strong business leaders are playing a critical role in the stability and growth of our economy locally and our reputation further afield. It is essential then that we continue to nurture, reward and grow the leadership traits that strengthen our business community including innovation, creativity, good governance and community engagement. The IoD Awards is a great showcase of leadership excellence and we look forward to finding out more about recent leadership successes across Northern Ireland.”

Categories for the awards, which are open to members and non-members alike include:

Category winners will be announced at a ceremony at The Merchant Hotel, Belfast on 17th May, 2019 and will each then have the chance to be shortlisted for the IoD UK Finals later in the year.

Overall UK Director of the Year Award winners to have hailed from Northern Ireland in recent years include Brendan McGurgan, CDE Global in 2016 and Simon Hunter, Hunter Apparel Solutions in 2015.

The closing date for entries or nominations, which can be submitted online, is 1st February, 2019.

For more information about the IoD Director of the Year Awards or to submit an entry or nomination, visit www.iodawards.com.

*Full Photograph caption: Launching the Institute of Directors Northern Ireland (IoD NI) Director of the Year Awards 2019, IoD NI Chairman Gordon Milligan, left, is joined by Adrian Moynihan, Head of awards sponsor First Trust Bank. The awards seek to honour the best performing directors in the private, public and third sectors across the region, but also afford business leaders the opportunity to be recognised on the national stage.

Success for British manufacturers at the Boat Builder Awards 2018