Success for British manufacturers at the Boat Builder Awards 2018 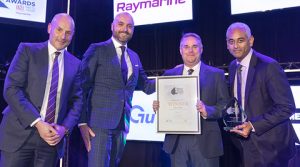 British Marine members had a fantastic night at the Boat Builder Awards 2018, which took place on Tuesday (13 November) at the National Maritime Museum in Amsterdam, with numerous members picking up awards on the night.

Princess Yachts’ innovative communications campaign for the new Princess R35 won the Retail Marketing Initiative award. Noted by the judges for being strikingly as far removed from traditional boat launch marketing as might be imagined, this campaign was awarded for truly breaking the mould.

British Marine members, Sunseeker International and Lewmar, jointly collected the prize for Collaborative Solution between a production boat builder and its supply chain partner. This was awarded for their achievements in relation to the ES800 common platform sunroof, hybrid patio door and upgradable sunroof panel for Sealine, working alongside Prestige Yachts and Hanse Group.

The evening culminated with recognition for Annette Roux, who has been instrumental in the success of the Beneteau Group since 1964 and she was presented with the Lifetime Achievement Award. New talent was also recognised with the Rising Star Award going to William Jet Tenders’ Design Engineering Manager, Dan Bloice-Smith.

Lesley Robinson, CEO at British Marine, commented on the night’s successes: “These richly deserved awards show how strong British boatbuilding is. We are proud of our leading manufacturers and pleased to see that the achievements of all of our members have been once again been recognised at these prestigious awards.”

This has been a great week for British Marine members at METSTRADE with an additional eight companies receiving accolades at the DAME Design Award 2018 during a ceremony on Tuesday morning.

British Marine is at the Show, hosting and organising the British Pavilion, and supporting the 117 member companies exhibiting across the event.