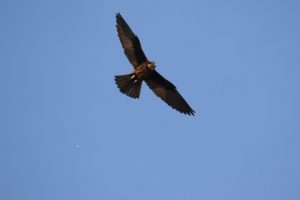 Blue bays, secluded beaches and white-washed villages might be enough to lure most visitors to the southern Aegean island of Karpathos.

Sun and sand-seeking tourists are increasingly being joined by a different breed: enthusiasts for the island’s plant, animal and bird life. Spotting avian species, many of which themselves as migrants have a kind of tourist status – is taking off in popularity. 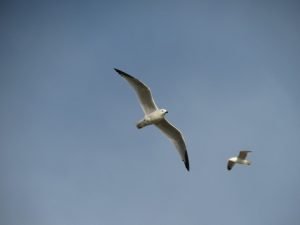 In addition to the birds that are resident among more than 200 species, many treat Karpathos as a “refuelling station” on their long flights between Europe and Africa. Like thousands of their human counterparts, these spend the winter in the Mediterranean region to escape the cold of Northern Europe.

Ornithologists are…  ‘flocking’ might be an exaggeration for an island that says it is untouched by mass tourism … so let us say ‘on the wing’ to Karpathos, which besides its favoured geographical location, has a variety of suitable habitats for feathered families. 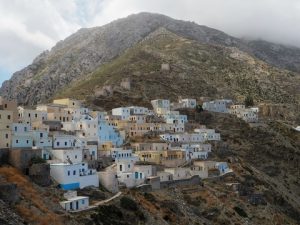 At the World Travel Market 2018 in London, Makis Bitzios, general manager of of Athens-based Re-Make Consulting, was keen to promote the attraction of Karpathos for bird-watchers among its more traditional “Greek island” lures. He said that a growing number of nature lovers keen to find new ecotourism destinations are planning to visit Karpathos. The municipality has launched an illustrated brochure which clearly details the characteristics of many of the species.

During WTM, as is becoming traditional, the municipality put on a distinctive display at the stand of the South Aegean islands.

Among summer visitors nesting on steeper parts of the coastline and on the islets is the Eleonora’s falcon, of which have been counted more than 300 pairs. 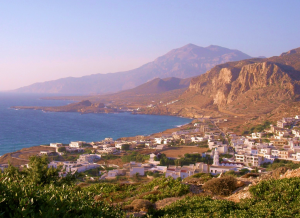 Eleanora’s falcon flies over rural and other open areas where it hunts insects and passarines (songbirds and other perching birds). The medium-sized specimen is named after Eleanor of Arborea, a Sardinian aristocrat and justice who promulgated a law in 1392 protecting nesting hawks and falcons against human predators.

One of the resident species on Karpathos is the Audouin’s gull, found near the coast, over the open sea and on the islets, where it nests. Sleek and imposing, it steers clear of humans.

The gull (larus audouinii) has main breeding areas from the Ebro Delta of Spain and the Chafarinas Islands off Morocco, to the Aegean Sea, Turkey and Cyprus. It has a black-tipped, dark-red bill. It makes its way south for the winter to West Africa and has been listed as “near-threatened,” because its future depends on the success of conservation measures. In 2015, BirdLife International assessed the population in Europe as 43,000–44,000 mature individuals. 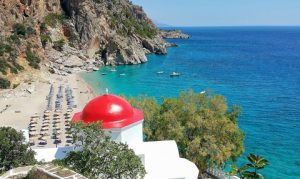 Mediterranean shags, and Scopoli’s Shearwaters (calonectris diomedea) are among other Karpathos sights, and the municipality says that up to five pairs of the endangered Bonelli’s Eagle and several long-legged buzzards are evident.

The island has two areas designated Natura 2000 – a European ecological network of sites that host protected and valued species.

Tourism officials suggest bird-watchers might like to combine their observations with inspecting other feathers in the island’s cap. Outdoor activities include hiking along 30 marked trails, identification and study of aromatic and medicinal plants, gastronomy including cooking in wood ovens, boat trips to remote beaches, harvesting olives and grapes, horse-riding, cycling in forests and by the sea, and diving and snorkelling. And there is more wildlife to be discovered: living in caves are the Mediterranean monk seal. 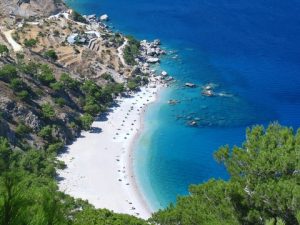 The second largest of the Dodecanese islands, halfway between Rhodes and Crete, Karpathos in the summer doubles its 6,000 population, and hosts international sports competitions and other events.

The fierce wind that lifts the spray from the turquoise waves and is thus enjoyed by wind-surfers blows its way to the mountainous north, battering pine trees and howling past sugar-cube-shaped houses. Pictured is the village of Arkassa, a successor to the ancient town of Arkessia. 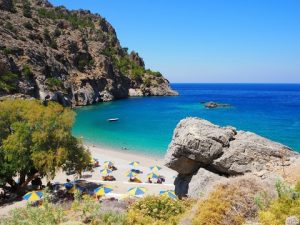 Distant from other Greek islands, Karpathos preserved peculiarities of dress, customs and dialect, the last resembling those of Crete and Cyprus.

Just beginning to draw tourists is the village of Olympos, which sits on a mountain ridge in the north. A tourist office description says: “Fiercely traditional, Karpathian women at this end of the island still wear traditional garb. Women wear their beautiful colourful traditional costumes every day and bake bread in their outdoor ovens.” There are 75 windmills in Olympos that were once a major flour production centre, of which four remain operational. 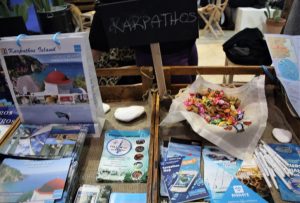 Olympos is described as “a live museum of architecture, ethnology, linguistics and musicology, where time to a large extent seems to have stood still.” Wedding celebrations may last for several days.

Among other so-called “hidden delights” is the capital and main port, Pigadia, which has the official name of Karpathos and is in the south-east of the island. In the north, near Olympos, is another port, Diafani. 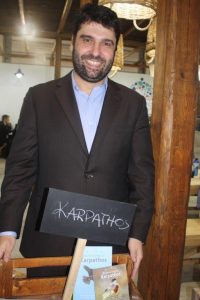 To the north, Saria island was once united with Karpathos, but an earthquake divided them. Saria has remains of ancient settlements and fortifications, and was once a base for Saracen pirates.

Like most Greek islands, Karpathos has had a turbulent history, undergoing many occupations. Karpathos in 1821 joined the fight for Greek independence, supplying money and repairing ships. Despite this, in 1830, the protocol of London awarded the Dodecanese to Turkey; Italians invaded in 1912, and Germans in 1943. Finally, it became part of independent Greece in 1948.

More about Karpathos at www.karpathos.gr 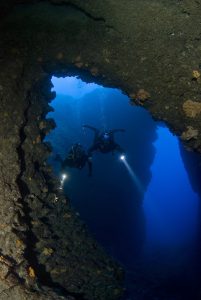 New report: crypto-assets and how they should be regulated