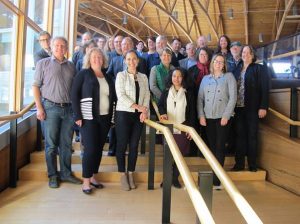 The first Nippon Foundation-GEBCO Seabed 2030 Project regional mapping meeting for the Atlantic and Indian Oceans took place this month at the Lamont-Doherty Earth Observatory of Columbia University. The meeting in Palisades, NY, was chaired by Dr Vicki Ferrini, who leads the Seabed 2030 Atlantic and Indian Ocean Regional Data Centre. In order to better raise awareness of complementary mapping efforts in the region, the session was coordinated to coincide with a US Federal Agency Working Group on Coastal and Ocean Mapping, as well as a meeting of the leads of the Atlantic Ocean Research Alliance’s Atlantic Seabed Mapping International Working Group (ASMIWG).

With the goal of mapping the entirety of the world’s ocean floor by 2030, The Nippon Foundation-GEBCO Seabed 2030 Project divides responsibility for data assembly and coordination in different areas of the ocean between four Regional Centres. These centres are located at The Alfred Wegener Institute (AWI), Germany, covering the Southern Ocean; The National Institute of Water and Atmospheric Research (NIWA), New Zealand, covering the South and West Pacific Ocean; The Lamont-Doherty Earth Observatory of Columbia University, USA, covering the Atlantic and Indian Oceans; and Stockholm University, Sweden, in partnership with the University of New Hampshire, USA, for the Arctic and North Pacific Oceans. Regional products are compiled to Global GEBCO Data Products at the British Oceanographic Data Centre which hosts the Global Centre.

The meeting, held over two and a half days, brought together participants from 18 organizations representing industry, academia and government, with 30 in person participants and a further six attending remotely. The meeting heard presentations about Seabed 2030 and its mission, US Federal perspectives on the Project, and an overview of GEBCO and its capacity-building efforts through The Nippon Foundation-GEBCO postgraduate training Programme based at the University of New Hampshire, alumni of which have recently taken part in the final of the Shell Ocean Discovery XPRIZE. The meeting also heard status updates from Seabed 2030 Regional Centres including the Atlantic and Indian, South and West Pacific, and Arctic/North Pacific Regional Centres.

On the first day, updates about mapping efforts within the Atlantic-Indian region were presented by participants from projects and organisations including the US National Oceanic and Atmospheric Administration (NOAA), the ASMIWG, The Nippon Foundation/GEBCO Indian Ocean Bathymetric Compilation, the Global Multi-Resolution Topography (GMRT) Synthesis, EMODnet Bathymetry, AusSeabed, University of Tasmania, Israel Oceanographic and Limnological Research, GEOMAR Helmholtz Centre for Ocean Research in Germany, the Republic of Mauritius Ministry of Defence and Rodrigues, the Marine Institute Ireland, the Geological Survey of Canada, and offshore survey company Fugro.

Further presentations focused on tools and technologies, and included a presentation from the IHO Data Center for Digital Bathymetry, an overview of recent and ongoing gap analysis conducted by NOAA to assess coverage within the US Exclusive Economic Zone (EEZ), and a presentation on gridding and visualization strategies from the University of New Hampshire.

The second and third days of the meeting took the form of brainstorming sessions of the Regional Mapping Committee (RMC) in order to develop an inventory of existing bathymetric data not yet integrated into the GEBCO grid. Strategies for reducing the barriers to data acquisition for the Seabed 2030 project were discussed, and the RMC also considered various strategies for engaging regional stakeholders and how best to optimise data gathering in the region.

The meeting in Palisades was the second regional mapping meeting of the Seabed 2030 Project, following a joint meeting held in Stockholm last month for the Arctic/North Pacific and Antarctic regions. The final regional centre, led by Dr Geoffroy Lamarche covering the South and West Pacific Ocean, will hold its regional mapping meeting at the National Institute of Water and Atmospheric Research (NIWA), New Zealand, on 4-6 March 2019.

“The meeting was a great success and was an important first step in growing and mobilizing the community of stakeholders within the Atlantic/Indian Region through the exchange of knowledge and ideas”, said Dr Vicki Ferrini. “The excitement and enthusiasm about the Seabed 2030 Project is truly inspiring and underscores that the global call to action is resonating loudly across the maritime sector. We are beginning to transition from a mode of networking and cooperation to true global coordination and collaboration, which is critical if we are to meet our common goals”.