Kira Phoenix K’inan: Glass Sculptor with Compassion for the Oceans 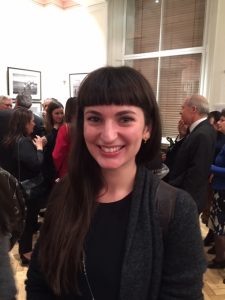 Kira Phoenix K’inan: Glass Sculptor with Compassion for the Oceans

London-based artist and designer Kira Phoenix K’inan brings together art and craft through her glass sculptures, many of which express her deep concern over the environmental health of the Planet’s Oceans.

This is clearly to be seen in her appropriately titled Iridescent Storm series. These works, which fall under her Texture Technique, have been created from the many shards of broken glass that she recycled from her time as a Masters student at the Royal College of Art, London.

“These works are a cathartic exploration of the broken becoming part of a greater whole to create something sublime out of the damage,” says Kira.

“On a larger scale, they also explore the devastation being done to our oceans. There are numerous promotional campaigns that sell the idea of the perfect beach holiday, but in reality the sea water is full of harmful chemicals and overrun with plastic, which cause sea creatures to suffer through ingestion or being caught up in the wrappings.” 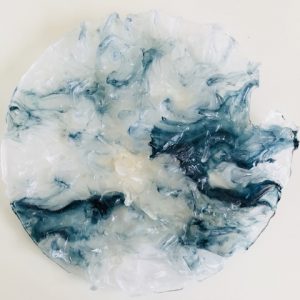 Within each glass piece, if you look closely, there are specks of gold leaf cast within the glass. “Gold is the iridescent quality within each work. The inclusion of this specific metal is a clear statement that the ocean is just as precious as gold or oil and if we are not careful, the storm that hits will be tremendous.”

What she calls her Texture Technique was developed during a four-month Artist in Residency exchange at Konstfack University, Stockholm. “Each texture artwork was created by my desire to literally get my hands on the mould material used for casting glass, and each piece is unique due to the forms my hands make whilst manipulating the material until the plaster sets.” 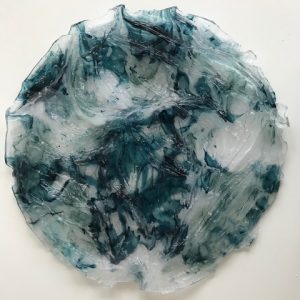 The Texture Technique took initial inspiration from the rivers, streams and lakes that surround Stockholm. Depending on the time of year, the water can be calm, covered in ice or churn so violently the water spits as it swirls.

Having established herself as a specialist in particular techniques, Kira has set up a business venture in London, under the name KPKinan. Alongside her artistic practice, she is a creative mentor and runs creative expressionism workshops that focus on drawing “as a way of expressing oneself when words are just not enough.”

Kira says that her sculptures explore the relationship between the artist and the drawing, and how a drawing can immediately express a feeling, thought or tell a story. For Kira, drawing is not limited to paper and pencils, it includes drawing machines, drawing with light using a camera and glass casting. 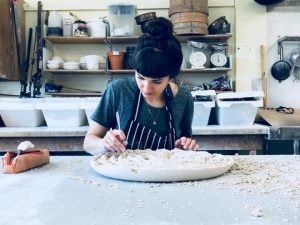 Kira in her studio works on a Carved Technique piece. Photo by Alvin Chan.

Her art has been likened to practitioners of the Futurism art movement, especially the painters Kurt Schwitters and Umberto Boccioni. Her use of line and colour create a dynamic movement that keeps the viewer’s eye tracking its course.

“Drawings are my way to tell stories and are inspired by my ever-changing surroundings, which are made physical through each line that interconnects with another. Each drawing is an abstract sculpture and each work grows out of the one before in intricacy, depth, colour and rhythm. My practice is rooted in my interest for storytelling, from the science fiction genre to ancient mythology, and the organic forms found in nature or under a microscope.” 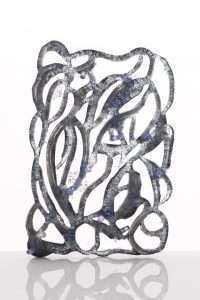 I Wanted to Take the Ocean with Me. Photo by  Sylvain Deleu

The glass series I Wanted to Take the Ocean with Me is part of a body of work that explores the desire to keep a place with you, even though being able to take an entire body of water with you wherever you go is not logistically possible. After spending a week in Lybster, a village in the Scottish Highlands, at the glass art gallery and studio North Lands Creative, “I was so inspired by the vast landscape that I wanted to take a piece of that magic with me.”

As a student at the Royal College of Art she explored traditional glass techniques and sought to translate them into a contemporary vision. She developed her innovative  Low Relief Drawing Technique, in which she carves directly into a plaster sheet and casts the piece using fine ground glass.

At the RCA, “I was able to expand my thinking of what drawing is and what it could be. The relationship between the artist and the drawing became my main focus, especially how a drawing can immediately express a feeling or thought.” She developed techniques stemming from paintings and short texts she began in 2012, when she travelled on her own through Asia – Hong Kong, Bali, Singapore and Thailand – for six months.

“The best method to express the sensory overload I was experiencing was through drawing on paper using watercolour. While making the series of drawings, I was reminded of Italo Calvino’s novel Invisible Cities, as his many descriptions of Venice differ depending on where you are in the city, and I was experiencing the same feeling in Asia. The drawings I made became abstract visions of my surroundings, and the work began to develop not only in intricacy but also shadow, light, colour and rhythm.” 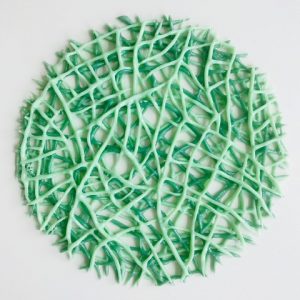 The Travel Drawing Series are about that fascinating six months, which for her is a personal journey of thoughts, words, ideas and her ever-changing surroundings being made physical through each line that interconnects with another.

“As an undergraduate, I discovered that drawing was not limited to paper and pencils. Studying sculpture, photography and performance at Central Saint Martins enabled me to create drawing machines; time-based drawing performances using ice and drawing with light, using different camera processes.

“When I arrived at the RCA, I wanted to translate the black lines of the two-dimensional drawings from my travels into sculptural form using glass. I tested all the processes I came across, from blown glass chandelier arms to pâte de verre [a form of kiln casting], until I developed my own technique of creating spontaneous drawings just as I had on paper, by carving into a mould. To create the layers of watercolour was another avenue of exploration that I continue to develop.”

The act of carving into refractory moulds has many references to print-making, sculpture and painting techniques (for example Max Ernst’s painting The Entire City), yet her reason for carving directly into the surface is to create one-off glass drawings or spike sculptures in the same way she would create works on paper. She uses tools that are either found or made to carve into the plaster, working in reverse to her paintings or works on paper.

Inspired by the photographic process, Cyan Type, which produces cyan blue prints by placing objects on top of paper coated with the ferric ammonium citrate and potassium ferricyanide and reacts to light. The result is a ghostly shadow of the objects once there surrounded by a vibrant cyan blue tone. 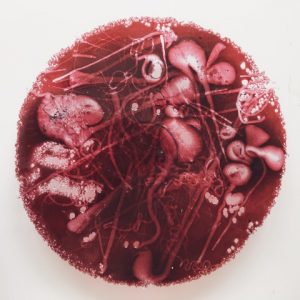 The Magenta Type uses three-dimensional glass objects made in the hot shop. Through the heat of the kiln, these shapes flatten, similarly becoming a shadow of the object that once was there.

“Magenta qualifies as a rainbow colour as it lies at the very end of the spectrum just after violet and ultra violet and just before red and infra-red. It is the colour of release; it helps us distance ourselves from the mundane things and enables us to release ourselves from the past. Because it is a composite colour of the physical red and the spiritual purple, magenta signifies the union of our earthy nature and our spiritual one. It is a spiritually uplifting colour with great feminine energy.” That is a quote from an earlier review by John Faraclas in All About Shipping.

Sierra in Black was inspired by the rock formations that sit under Edinburgh Castle. Taking part in a year’s residency at Edinburgh College of Art, Kira was fortunate to have a direct view of the castle from her desk.

The Scratch series started as an experiment: “how thick can I carve a line in one direction and how thin can I carve the lines that connect all the pieces together? Through my trial, error and breakages, I found the perfect balance between the thick lines and the fragile thin lines.” The series echoes the landscape of Stockholm and the volcanic rock the city rests on. 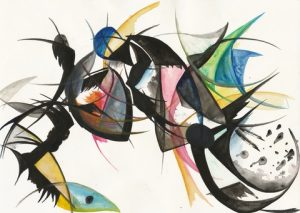 Rust Frame is part of a series that looks to mimic wrought iron gates, which rust over time as the paint peels. It uses the reactive qualities of certain Bullseye colours to create new colours through mixing them and exposing them to heat. Also referenced is glass that has previously mimicked marble and other precious materials.

There is plenty of use for broken glass. One of her latest panel glass sculptures is Collateral Beauty in Red, which contains shards of 28 glass sculptures broken beyond repair in 2017. “Creating the series was a cathartic experience for me to transform the destruction of so many glass sculptures into a series of new works that hold the sublime beauty of damage.”

New projects are in the wings.  Among them, Kira is exploring fresh ways of reflecting the auras of the heroes, gods and goddesses of Greek mythology, a subject which enthrals her.

She was born in Hong Kong, where she lived until she was seven and the family moved to Singapore, where she continued her education up to the age of 10. In the UK, she was a pupil at Grenville College, in Devon, which specialised in dyslexia support. Kira pursued A-level studies at Brockenhurst College in Hampshire.  She graduated from Central Saint Martins in June 2010 and the Royal College of Art in June 2015.

Kira has had four solo exhibitions in London and one in Stockholm and participated in some 50 group shows.