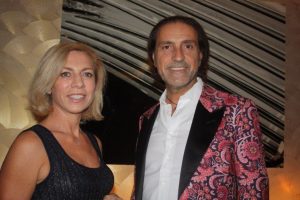 Here are those exalted marques, though, in a way you have never seen them before. They are magically transformed into abstract art when artist-photographer Marco Carnaroli concentrates on intense patterns of car body detail.

Marco zoomed in on surface sections of vintage vehicles that drew his attention at a fair in Essen, Germany.  His image results are startling, with their primary-quality reds, greens, blues and yellows. The parade of colours, even the grey, is as rich as would be expected from a Diaghilev ballet. Powerful metallic sheen expresses the dignity of industrial craftmanship that is expressed through the finished excellence of a fine auto.

A collection of his compositions with distinctly contemporary edge, managing at the same time to be abstract and non-abstract, graces the lobby and bar area of Hotel Baglioni, an Italian-themed five-star lodging in Kensington, where they can be seen until May 27, 2019.

Marco entitles his selection Details, and in an interview during the private view he explained his focus on subject matter that can be quite circumscribed or overlooked by the casual observer. “It has to be something that catches the eye,” he emphasised. “It has to appeal to me. I photograph it, and it can stay in the camera, or it can become an art work.” 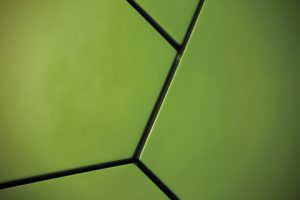 Although these are “details,” they are here parlayed into striking large-scale (up to 150 cm by 115 cm) canvases in this, his first solo exhibition in London. His break from more traditional photography over the last few years to turn his lens to fresh angles is presented to London by Carola Syz Projects, in the latest of Carola’s string of successes in introducing first-rate Italian artists to the UK capital.

Milan-based Marco has hitherto been praised for his photography in traditional arenas such as fashion (including Harper’s Bazaar and Vogue America), natural and urban landscapes, and travel photo-reportage.

“Then,” says the catalogue commentary, “he started looking for something different, and in following his interest in vintage cars, he shifted his attention from a more general view to details themselves, concentrating on tiny parts of a given surface, which are then carefully investigated.” 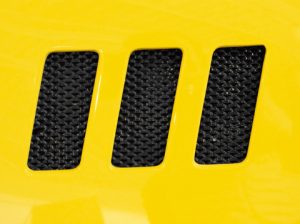 The originality of Details “lies not so much in its initial idea … but in the intended search for abstract art, which is however simultaneously contradicted by the existence of some recognisable details.”

Such work poses the question of the difference between a vision that yields two or three dimensions. The images (a red, white and black neo-keyboard format of a section of a Morgan is chosen for the exhibition poster) appear to be almost as tactile as the real thing.

The legacy of the radical simplicity Marco takes up is suggested in the catalogue. 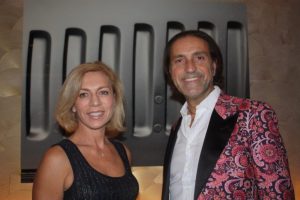 Carola and Marco with ‘Mille Miglia.’

Earlier innovators of this notion are cited: one is American photographer Paul Strand (1890-1976) who took close-ups of car wheels and lights; while the Russian constructivist Alexander Rodchenko (1891-1956) experimented with the camera’s role in redefining perception.

Incisively, Rodchenko wrote: “In order to teach man to see from all viewpoints, it is necessary to photograph ordinary, well-known objects, from completely unexpected viewpoints and in unexpected positions, and photograph new objects from various viewpoints, thereby giving a full impression of the object . . . We don’t see what we are looking at.”

Marco chooses angles in such a way that surfaces seemed to be incised geometrically, so that the frame of reference, the reality, dawns on the viewer at second or later glance. 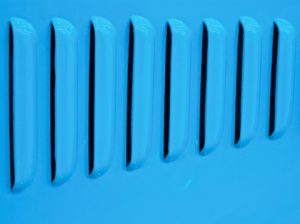 A comparison would be drawn by art historians aware of the “slash” works that Lucio Fontana (1899-1968) produced in Milan from 1958 onwards. Fontana punctured canvases in what has been called a gestural aesthetic… and like Marco Carnaroli today, he was drawn to brilliant colours.

With Marco, says the accompanying note, “Details can therefore finally be recognised as belonging to cars, and isolated from their context they acquire a very special, pleasing charm.”

Not everything in the London show is related to automobiles, but a picture entitled Murano aesthetically sits well, given its juxtaposition of bold red and white and… a slash-like motif. One of a series of five, it is an image of a typical house of Murano, the collective name for islands in the Lagoon of Venice famed for producing beautiful glassware. In the photograph, the reflection of the dwelling shimmers in the waters of the canal that flows beside it. 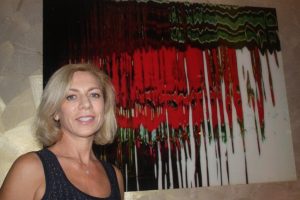 A more optically dizzying, geometrical phenomenon is a panoramic shot of wheels of Grana Padano cheese with their thick, straw-coloured rind, neatly stacked on warehouse shelves. The setting’s appeal to this intellectually-precise artist is clear.

Wise words from the curator sum up Marco’s novel photographic treatment of such products of refined manufacture: “After all, abstract art comes not from denying reality, but from a unique and different way of observing reality.

The Bulletin: Up in the air