2019 TOUR VOILE: Spotlight on the most well-rounded sailors 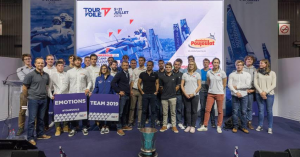 A PIONEERING EVENT AND A MONUMENT OF FRENCH SAILING

Over the years, the Tour Voile has established itself as a pioneering event famous for its ability to evolve and break new ground.

Every summer, the strong field of the event reflects the diversity of the world of sailing, with seasoned amateurs, the stars of tomorrow and veteran champions. Whether they come from off-shore or in-shore* racing, the sailors of the Tour Voile compete on equal terms, tackling an extraordinary event for all-rounders that features both coastal races and stadia regattas. This tough format is designed to make it difficult for competitors to master its various aspects. The Tour Voile puts the spotlight on the most well-rounded sailors.

Sailors eyeing victory in the 2019 edition will have to prove their endurance, stamina and determination throughout 7 acts and 17 days of racing. Competitors will be thrown into the deep end, starting with a pure nautical regatta that will be held in Dunkirk for the 33rd time in 42 editions. The Tour Voile Base will then head to Normandy for two consecutive acts: Fécamp, in Seine-Maritime, not far from the legendary site of Étretat, and Jullouville, in Manche, within sight of Mont Saint-Michel.

After 2015 and 2017, the Tour Voile will again visit the home town of the Vendée Globe, Sables d’Olonne, before heading to the Mediterranean. The first stop is Port Barcarès, in Occitania, an act that promises wind and sailing in style! Next up is Hyères, which boasts one of the most jaw-dropping roadsteads in the world and will provide a picture-perfect backdrop to the Diam 24 od yachts. Nice will host the seventh and final actfor the sixth year in a row. The crowds watching from the Promenade des Anglais will enjoy a pure nautical regatta finish and, on Sunday 21 July, the Super Final, which has played a decisive role in the podium since its inception three years ago and will therefore keep fans on the edge of their seats.

2019 marks the return of territorial identifications, one of the major features of the Tour Voile since it was established. Teams will have to bear the name of the town or region to which they are connected on their masts, making it easier for fans to identify and cheer on crews from their regions.

Another highlight is the creation of a mixed classification for teams who field at least one female crew member every day, putting the focus on the feminine talent of the Tour Voile.

FRANCK CAMMAS IS BACK

Registration for the 2019 Tour Voile opened on 28 November. About 30 teams are expected to take part in the 42nd edition, including an Omani vessel with Franck Cammas as its skipper. A global icon of sailing, the yachtsman from Aix-en-Provence won the Tour Voile on an M34 in 2013 and finished second in 2015, the first year featuring Diam 24 od yachts. His impressive wins in off-shore (including the Volvo Ocean Race, Route du Rhum and Transat Jacques Vabre) and in-shore racing (America’s Cup and French Olympic Week) make Franck a textbook example of the elite well-rounded sailors that the Tour Voile celebrates with its unique and tough mixed format.

*In-shore: in contract with off-shore racing, in-shore racing consists of short races held near land and lasting for a day.