The Santi Find the Eagle project has made renewed progress with its fifth expedition after being hit by adverse weather in September 2018.

The team’s quest is for the wreck of the Polish submarine ORP Orzeł which patrolled under Royal Navy command during the Second World War.

Unrelenting winds and rough sea in September forced the team to postpone the search and return to Poland. The team resolved to complete the expedition in 2018 if favourable conditions opened up, having spent a frustrating week in the Danish port of Thyborøn, trapped in harbour by harsh weather conditions. Time there was well spent carrying out research with local fishermen and the Jutland Sea War Museum but it was not possible to undertake searches of the North Sea bed for the missing WW2 submarine, whose name is Polish for Eagle. 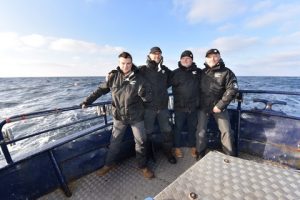 After returning to Poland and the UK the team kept a close eye on weather changes, awaiting a window of opportunity to return to Denmark. Fortunately, and surprisingly for the time of year,  mild temperatures and only moderate winds were forecast for early November. At short notice the team members on standby made swift preparations. On November 13 a core group composed of Tomasz Stachura, Benedykt Hac, Piotr Michalik and Karol Jakob, left Gdynia and London and returned to Thyborøn, to board the specially adapted trawler Nemo. The fifth expedition recommenced, sailing for six day to carry out planned searches of the North Sea. 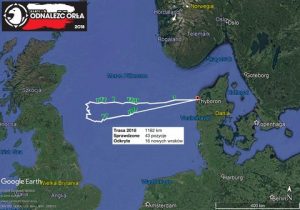 The weather, originally quite good, turned out to be only just bearable. Strong northern winds led to heavy sea conditions, and the entire crew suffered seasickness. “I am pretty resilient and have a strong stomach for the sea but for the first time in my life I felt quite unwell. We all put in a lot of effort to keep functioning as normal,” said Mr Michalik. Despite the challenging conditions, the members of the expedition sailed 1,162 km, researched 43 established positions, 16 of which turned out to be previously unidentified wrecks. Orzel was not found but progress was made and the search area for future expeditions has been narrowed.

The team was also able to carry out a detailed hydrographic study of HMS Tarpon, a T-class Royal Navy submarine lost in April 1940 after attack by the German Q-Ship Schiff 40. On her final voyage Tarpon was sailing from Portsmouth to Rosyth where Orzel was stationed when she was diverted to Norway and came under enemy attack. The wreck was located in 2016 but the Santi Find the Eagle team were able to capture detailed imaging of the vessel using their state-of-the-art equipment. 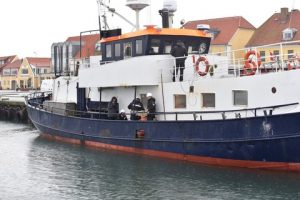 Tomasz Stachura, head of the expedition, said: “The conditions were more difficult than we expected, but we had to finish the work started in September. We checked all known obstacles verified in this area. What’s more, we were able to draw Danish fishermen into our project, I am very happy about this. They promised us to collect as much information as possible for us about the wrecks of the North Sea during the winter period.”

From the beginning, the Maritime Institute in Gdańsk has been a key partner in the project. The institute provides top-class hydrographic equipment and specialised search devices, such as the multi-directional depth sounder (MBES), which permits effective sea-floor survey in a bandwidth of up to 400 m. 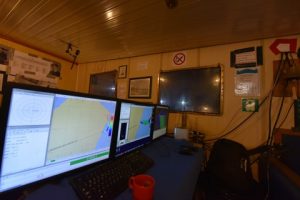 “This is our fifth expedition: we are more organised and efficient. We were able to transport all the equipment in one vehicle and install it on the unit in less than four hours. My hydrographic crew did a great job,“ said Dr Hac, head of the hydrographic team.

The team is now planning its sixth expedition. They say they are single minded, determined and not discouraged by the size of the challenge in front of them. The lost Orzel and its heroic crew rest somewhere on the North Sea bed and waiting to be found.

Gdynia-based Santi, main sponsor of the project, is a leading brand in the global dive equipment market.

More about the project can be seen at www.santifindtheeagle.com and at https://www.youtube.com/watch?v=lExIavrAWwE&list=UUSMMbSOX2pWwBpznedKPLMA

2019 TOUR VOILE: Spotlight on the most well-rounded sailors