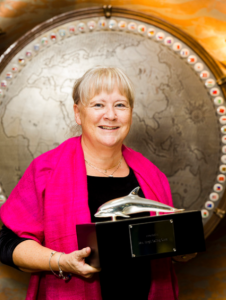 The prestigious International Maritime Prize for 2017 has been presented to Mrs. Birgit Sølling Olsen, former Deputy Director-General of the Danish Maritime Authority.

“Mrs. Olsen has had a distinguished career in the maritime field and made an outstanding contribution to the objectives of IMO. Her comprehensive knowledge of maritime law is combined with a deep understanding of the business aspects and growth potential of the maritime industry,” Mr Lim said.

The International Maritime Organization (IMO) Council decided in July to award the Prize to Mrs. Sølling Olsen in recognition of her invaluable contribution to the work and objectives of IMO and to the international maritime community as a whole.

Accepting the prize with gratitude, Mrs. Olsen reflected on the changes that IMO has undergone during her career. “In 1996 a delegate could only be reached by fax or by a message left at the IMO switch board. Today delegates are multitasking responding to a number of e-mails, while attending the meetings.  The IMO spirit of cooperation is still the same, but the adoption process is much faster. This gives IMO a better chance to respond to the need of its constituents,” she said.

“Sustainable results can only be achieved by respect and trust.  Respecting that all views have to be heard and facts need to be put on the table before acting and that the solutions need to be workable. Trust that we are aiming at the right goal, using the right tools and that we all in. The results are not just beautiful words on paper, but results that lead to real improvements for safety and the environment. They illustrate that we together can achieve results which by far exceed what an individual State can do.  This is perhaps the reason why so many of us, including myself, continue to be here.”

In their nomination, the Kingdom of Denmark highlighted Mrs. Sølling Olsen’s distinguished career in the maritime field and acknowledged her significant contribution to the objectives of IMO. Her comprehensive knowledge of maritime law was combined with an understanding of the business aspects and growth potential of the maritime industry.

Denmark emphasized Mrs. Sølling Olsen’s focus on international solutions as a member of the Danish delegation during deliberations at IMO, in particular during negotiations related to the International Oil Pollution Compensation (IOPC) Funds; the development of international guidelines to combat piracy; and the development and adoption of the Nairobi Wreck Removal Convention, 2007. Mrs. Sølling Olsen also worked tirelessly to ensure seafarer issues were addressed, both at IMO and at the International Labour Organization, including seafarer training and education, working conditions and personal safety.

Mrs. Birgit Sølling Olsen
A law graduate with a Masters in Law from the University of Copenhagen, Mrs. Sølling Olsen started her maritime career as a legal adviser to the Danish Register of Shipping. She moved to the Danish Ministry of Industry (which then included maritime affairs in its responsibilities) in 1988, becoming Director of International Shipping Policy and Maritime Law Merchant Law at the Ministry of Industry in 1995. In 1996, Mrs. Sølling Olsen became Director for Shipping Policy at the Danish Maritime Authority and from 2003 until her retirement in 2017, she held the post of Deputy Director-General of the Danish Maritime Authority.

Mr. Richard Schiferli, former Secretary-General at the Secretariat of the Paris MoU on Port State Control. He was nominated by the Government of Ireland.