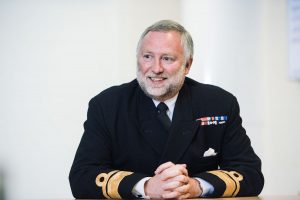 Rear Admiral Lowe will fill the role whilst a permanent replacement is sought for John Humphrey, the current Chief Executive and Accounting Officer of the UKHO, who will leave at the end of January 2019.

“I look forward to taking the helm as Acting Chief Executive, whilst we continue to transform the UKHO into a world-leading marine geospatial information agency. It is an exciting time for our team as we transition to a data-centric, digital-first organisation, whilst continuing to deliver on our wide spectrum of responsibilities, including our obligations to support safe passage in UK waters, provide hydrographic services to our Defence customers, work closely with our international partners, and play an active role across government to unlock the potential of marine data.”

The Minister with responsibility for the UKHO Earl Howe, Minister of State for Defence, said:

“I would like to thank John for his leadership as CE of the UKHO over the last four years. He has established UKHO as a world-leading provider of global digital navigational services, defined and delivered a strategy to transform into a digital-first organisation, supported wider Government policy aims and played an instrumental role in the organisation’s new build. I am confident that Rear Admiral Lowe and his team will continue to capitalise on this powerful legacy to ensure that UKHO can truly harness the transformative power of marine geospatial information.”

Tim is a Rear Admiral in the Royal Navy and joined the UKHO as UK National Hydrographer and Deputy Chief Executive in 2015. In his role, he has led a number of key projects for the UKHO. This includes the Commonwealth Marine Economies and Overseas Territories Seabed Mapping programmes to support the development of blue economies in territories across the world.