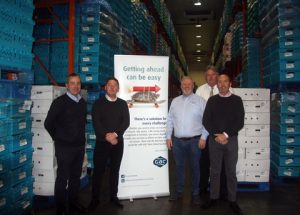 The Wild Water Group serves the food & drink sector, which has been identified by the Welsh Government as a key economic drivers of the regional economy. In 2017, exports from Wales in the sector grew 20%, compared to a 9.5% increase for the UK as a whole over the same period.

Under the alliance agreement, from this month, GAC will provide a range of freight forwarding services and draw on its international reach, resources and experience to help the Wild Water Group pursue international import and export opportunities for its customers. As part of its expansion plan, the Wild Water Group has boosted its operation with the purchase of a 130,000 sq ft storage and distribution facility in Aberbargoed, with the support of the Welsh Government.

“The next logical step was to align ourselves with a leading worldwide logistics company with the expertise to complement our long term business objectives,” says Wild Water Group Managing Director Ken Rattenbury. “GAC has that pedigree and we are excited to have signed a deal with such a prestigious global company.”

As one of the UK’s many food consolidators, the Wild Water Group is no stranger to the complexities of freight forwarding as they already pack containers for customers and export them as far afield as Japan and New Zealand, or across the channel to Europe for countries such as Spain. A key player in the Welsh food sector, it wanted to form an alliance with an established partner to give customers across its five subsidiaries a bespoke service. That partner is GAC.

The alliance opens up close associations with major airline carriers such as Qatar Airways, who have already seen the potential of Cardiff International Airport as a major passenger and freight hub. It also gives the Wild Water Group the opportunity to link up with other cold store operators worldwide with whom they could negotiate reciprocal trade agreements.

Peter Orange, GAC’s Group Marketing Manager – Logistics, adds: “The combination of Wild Water Group’s local infrastructure, the GAC Group’s global reach and the specialist knowledge of GAC UK’s Time Critical Services arm is a recipe for success. Clients benefit from longstanding, strong alliances with major air and ocean carriers as well as access to our global multimodal network and associated cost savings. And our Authorised Economic Operator (AEO) accreditation confirms we have what it takes to provide fast, efficient customs and documentary support.”

The partnership will provide end-to-end cold chain services around the clock, initially focusing on the Middle East, where GAC has been active for more than 60 years and boasts extensive logistics resources including ambient and cold chain warehouses.