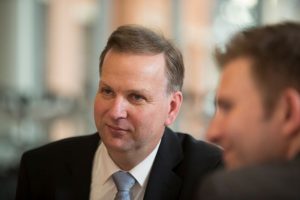 Dybedal will use his Chairmanship to continue to develop the NSOCC as a platform to help drive beneficial changes in operational working practices and to build greater trust between owners, charterers, and other stakeholders in the operation and claims process.

Rune Dybedal, Chairman of the NSOCC and a Senior Executive (Claims) at North P&I Club, commented, “The business and legal frameworks that the NSCOCC designs are frequently used for professional guidance. As Chairman I will continue to prioritise a commercial focus for the conference; one that delivers a comprehensive mix of legal and technical programmes that reflects the operational concerns of all players operating in the North, Baltic and Irish Seas.”

Dybedal continued, “The NSOCC’s core competencies include developing standards for trading conditions and adapting terms for bills of lading, and the proper handling of hazardous goods. The conference has members from more than ten European countries, including some of the biggest RoRo operators. The conference will be working with their members to develop guidance that helps minimise operational disruption during this challenging period for shipowners and charterers.”

The NSOCC has met annually since 1976 to develop best practice across areas such as shipowner and charterer liability, and passenger and cargo claims. In recent years its work has led to the creation of industry benchmarks, such as the North Sea Standard Conditions of Carriage which are now applied by several shipping lines. The NSOCC’s membership is predominantly shipowners and operators operating in the North, Baltic or Irish Seas, as well as P&I clubs, marine surveyors, shipping lawyers and other professional experts. Attendance is by invitation only. The next conference will be held on 7 and 8 October 2019 in Ipswich.

Rune Dybedal is a Norwegian qualified attorney, and has worked as an Attorney and Senior Claims Executive at North for 19 years and more than 26 years in the industry. He graduated from the University of Oslo in 1990 and he holds an additional postgraduate degree from the Scandinavian Institute of Maritime Law.