A graduation to remember 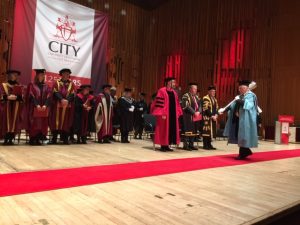 A graduation to remember!

John Faraclas was there with his camera and writes:

Graduation is the pinnacle of a student’s academic life and an opportunity to celebrate the culmination of the hard work that has gone into achieving one’s award!

Very honoured and lucky to be present and in a way participate in this Degree Congregation at Cass Business School, City University, at the Barbican Centre where, over the years, I have attended more than two dozen graduation ceremonies! This one, at 14:00 hours, for many reasons being more than a special one! 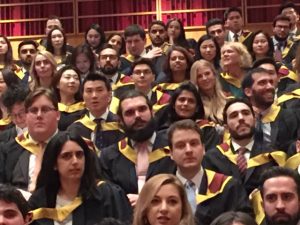 Just before the procession’s start…

This year City University proudly celebrates its 125th anniversary; this year although attending this graduation for Antonis Virgiotis – whose interest and successful progress in the Shipping Adventure I have followed over 13 years now, coincidentally brought also some good friends and relatives around from Greece and Chios too to the Barbican Centre; more than a small world; this time the event was more than touching! 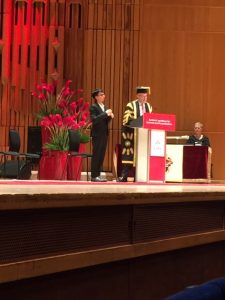 The process is not only an inspiration but mainly an academic traditional British experience worth attending if you can, even if you don’t have a specific graduate for whom to attend his or her graduation! The academic dress – different gowns for the Bachelors and holders of all diplomas, different for those obtaining their Masters; different for doctors other than higher doctors and finally different for higher doctors. Hoods – so many…, caps… everything is so special and orderly!

The ceremonial order with the incoming procession, the speeches and particularly the opening one by the school president, the student speaker, the music – this time for the inward procession it was by Marc-Antoine Charpentier “Prelude to Te Deum.” 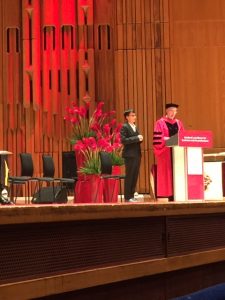 Prof Paolo Volpin at the podium

An excellent opening speech was delivered by the president of Cass Business School Professor Sir Paul Curran who, after recapping everything specially relevant one could wish to hear on the occasion of a this graduation ceremony given the 125 years marker, ended with the following: “For it was Aristotle who observed that ‘We do not act rightly because we have virtue or excellence, but rather we have those qualities because we have acted rightly. We are what we repeatedly do: Excellence then is not an act but a habit!’”

Prof Paolo Volpin, vice-dean at Cass Business School then took the podium; what a superb speech that was! He stressed that graduates are now the “… global leaders of tomorrow”. He continued by saying that “…our world is in great need of your leadership…”. He also referred to the need to nurture diversity being another key in strengthening communities – in the case of Cass students come from over 140 counties and each graduate joins an alumni network spanning 160 counties! Responsibilities was another focal point of his speech… 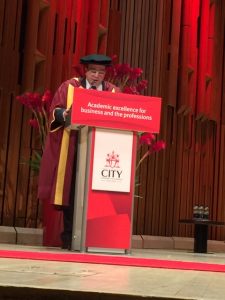 The proceedings continued with the graduates being called on stage to receive their degrees; the first of them under the tutorship of Prof Nikos Nomikos followed by those in the classes of Dr Dirk Nitzsche, Dr Byung-Gak Son, Dr Sara Jones, Dr Ivana Raonic, Dr Nicholas Motson, D Joanna Zaleska, and Dr Mark Andrew.

The first group who received their Masters thanks to Prof Nikos Nomikos was that of Master of Science in Energy, Trade and Finance. Four out of 47 were Greeks… The second group from Prof Nomikos was that in which Antonis Virgiotis stood first among equals; it was in this group of graduates receiving their Master of Science in Shipping, Trade and Finance that my friends and relatives’ offspring were participating; it was in this group that 34 Greeks out of 67 received their degree. George Pirinis who is also a neighbour of ours in Paleon Faliron, Athens, the former Greek ambassador in the United Kingdom and friend Elias Gounaris’s son Panayotis Andrey Gounaris, and Michalis Koulourakis – a relation of my nephew Nicholas Attaliotis, another London scholar… The other group was from China – an “upcoming force” lately in the United Kingdom’s universities… 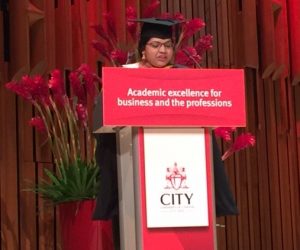 Each presentation was followed by clapping and applause by the one thousand strong audience to each of the graduates! A great momentum in an excited atmosphere…

Pleased to notice that there were some special awards and prizes such as the Cass Business School MBA – Beta Gamma Sigma awards; the Specialists Master’s Programme – Beta Gamma Sigma awards; the Faculty of Finance with, amongst others, the Stelios Scholarship (Stelios Haji-ioannou), the Michael M Xylas scholarship, the Faculty of Actuarial Science & Insurance and others. 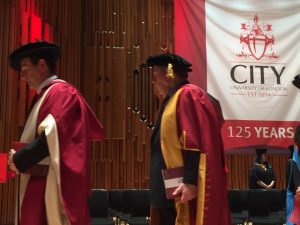 Felt proud and honoured with the Greek mind on charity all being the inspiration of yet another Greek, Prof Costas Grammenos CBE, the heart and soul of Cass Business School as he is known supported by an excellent team of professors and lecturers…

Dr Ivana Raonic introduced the student speaker for this afternoon ceremony, Ms Chinnuthai Shanmugam who come from Chennai University in India. A very touching speech from a down-to-earth person seated, coincidentally, during the process just five yards from my place! 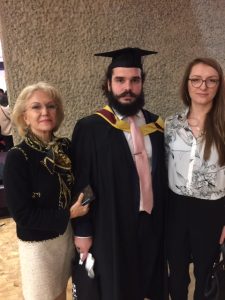 Afterwards the procession retired in an orderly way with the outward procession music by Daniel Speer “Sonata from die Bankelsangerlieder” and all students and guests headed for the photographic …session and the drinks reception in the foyer areas of the Barbican Centre.

Drinks, drinks of joy and happiness as well as appreciation for a great event which we call and rightly so “a graduation to remember”.

Many Congratulations Antonis Virgiotis; Planet Ocean is your oyster: Conquer it! Same applies to all graduates, friends, relatives  from all over the spectrum!

Lastly our thanks to Prof Costas Grammenos and his team – Kristie Loutsiou in particular, at Cass for the opportunity to be there in this Milestone Event!

Congratulations to all in making this a special day for thousands of people world-wide. Our thanks also to two of the organising ladies, Louise and Lucy, for being so understanding, humane and helpful! 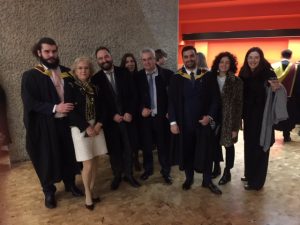 London remains the higher education capital of Planet Ocean with more world-leading institutions and organisations than any other international city, and students from over 180 nations; shipping and its related subjects being on all counts the number one!