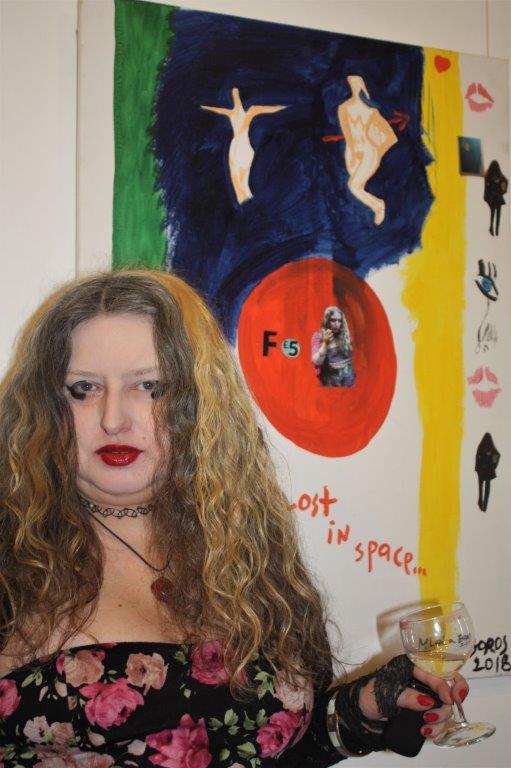 Her bold contribution is entitled Lost in Space, an “interpretation of the beginning of the world, and feminine self-portrait.” Rather than the cosmos, Lost in Space refers to the inner space of the soul, the time when “I felt a bit lost.”

Her brushstrokes are becoming more robust, a reflection of her admiration for the technique of Robert Rauschenberg (1925-2008) whose vision effectively set the Pop Art movement on the road.

Within her study, Marta includes a photographic image of her younger self, and her diverse ideas generate questions about the role of women in society. Her canvases are always a startling melange of symbolism and have rightly attracted increasing attention.

She was among three dozen artists invited to take part in Roots & Rifts at the gallery which is a larger venue than appears from the outside – like several such places in London, the lower floor extends under the pavement, so that in this instance most of the shopping and coffee-consuming crowds do not realise the wealth of talent beneath their feet. 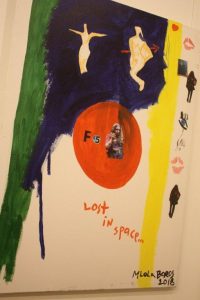 Lost in Space. By Marta Boros.

Curator Ana Cockerill, a Brazilian artist and a state registered art psychotherapist living in London, has addressed the Roots & Rifts theme which is explained thus: “People grow in different ways, sometimes take directions that they never expected and experience new forms of living. Taking another path will bring new memories and could reinforce our roots but can also produce rifts with the past.

“But rifts can also bring awareness and, upon reflection, enhance our original roots and make possible the understanding and acceptance of changes. Perhaps one should never get so attached to their own roots. After all, a tree must one day reach beyond its roots as we must leave our baby shoes behind. It was this thought that gave rise to Roots and Rifts.”

As a “collaborative gallery,” Espacio works with scores of artists of many backgrounds, and the new exhibition has allowed a selection of them to explore questions relating to experiences of living abroad and identity, memories and emotional challenges. 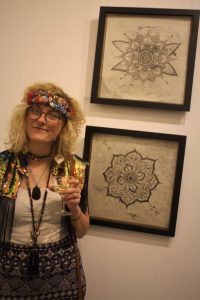 Lizy Bending with Temple Road #1 and #2.

The popular printmaker and mixed media artist Lizy FeelFree Bending showed pieces more reflective than some of her more outgoing compositions. Temple Road #1 and Temple Road #2 are hand-drawn monoprints of mandalas – circular figures from Hindu and Buddhist symbolism representing the universe. Such detailed, intricate patterns she finds “completely meditative. They are good for my soul and they help me feel at peace…”

Lizy is still spellbound after a residency in India – at Arambol, by the sea in Goa, a magnet for hippies and other visitors. It was her first time in the country, and she delighted in the sights and sounds. The mandalas contrast with her previous activities, which include constructing dramatic temporary sculptures and installations for UK festivals where she has taken a key role in supplying décor. She revels in the milieu, for instance saying during the Triplicity Festival, which is described as a fully immersive psychedelic UK music and arts event: “the crowd’s warmth throughout the weekend keeps me full to the brim with positivity.” 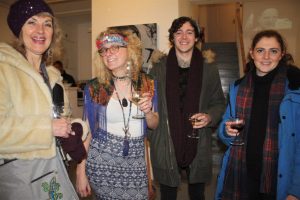 Lizy Bending with friends at the private view.

In addition to her festival commitments, Lizy has participated in many art exhibitions in London and the southeast and in Paris, Cairo and Bulgaria.

Although she has pivoted away from using her talents to send political messages, she says that artworks “have an incredible autonomy and thus, the power to educate.” She supports the revival of woodcutting; woodblocks were first developed because of their accessibility as a resource and for their communicative qualities; as communication in our contemporary society is driven by technology, her latest works transform digital prints into the physical “through archival and museology interests.” 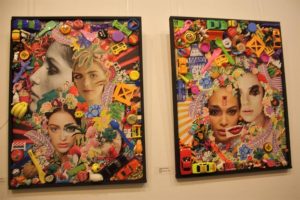 At the Espacio show, Denise Wyllie, who has travelled extensively in recent times to show her work, has a triptych of screen-prints Creatives Together. Denise produces landscapes and portraits in lithographs, screen-prints and lino and woodcuts.

Cristina Cantilena, who has studied at the Academy of Fine Arts in Florence, showed two mixed media works on wood full of colour under the title Blend. The collage brought into play framing the faces of beautiful women small found objects including toy cars, plastic spoons and bottle tops. This reflects her interest “in the relationship between wasted materials and art. I draw my inspiration from disused and forgotten items, or old and new memories that find new life and new colours on the canvas.” 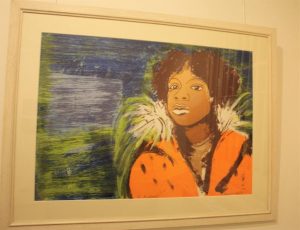 From a triptych of Creatives Together (Cuthbert Carté Luxury ©). By Denise
Wyllie

Of a tender nature was an oil painting of rose-hued background and a bouquet of carnations with the plaintiff title love ME. Ida Ndoni fashioned pink tissue paper to deliver the message on the canvas. Light red symbolises admiration, while dark red represents deep love and affection, according to the website of Teleflora.

Consuelo Radclyffe made the compelling small sculpture of a girl playing with her dog Dressing Alfredo. It is of ceramic and papier mâché with stains and glazes, typical of her stories derived from childhood memories. She designs clothes specially for each piece. “Many of my ideas come from objects found in scrap yards, such as gratings, birdcages, metal boxes… My work derives more from my spirit than the skill of my hands,” says her statement. 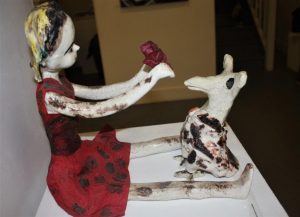 Espacio Gallery opened in 2012 on a site close to Brick Lane and is run and funded by its own artists. “We believe that making art is about communication and to communicate, in an ideal world, artists should be able to have their own platform where they get a chance to show, discuss, engage and share their vision with an audience.” 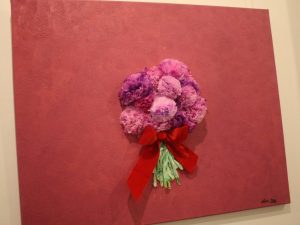 love ME. By Ida Ndoni

Jittery Markets with the BDI@905…