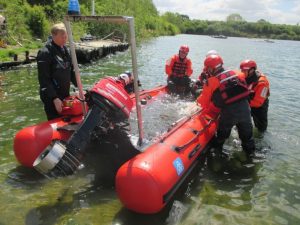 LFB is one of the largest firefighting and rescue organisations in the world and viewed as the point of reference for fire brigades in the UK. Babcock is a leading engineering services company supporting a range of government bodies and private sector customers, including the fleet assets of the LFB.

Securing this contract is building upon the foundations of a relationship formed between Survitec and the LFB in 2002, when a series of water rescue products such as lifejackets and throwing lines have been regularly supplied.

The DSB 470 FR rescue boat originally existed to serve the military and special forces market but has since been modified to meet a broader range of customer requirements.

This is the first non-military sale of this particular model, having been tailor made and designed around the needs of emergency service teams. Modifications include a low-pressure rapid inflation system plus an aft navigation and light frame, which offers an effective rapid response solution in what can be demanding environments. Due to its inflatable floor, the DSB 470 FR is lightweight and stowage-savvy for transportation without compromising its integral in-water performance, making this a versatile solution for use in water and flood rescue operations.

Michael Bonney, Fleet Engineer, Babcock, (LFB), Fleet Management, remarked: “After a stringent tender process we look forward to continuing our relationship with Survitec. The tender was won in a highly competitive market place, where the DSB 470 FR thrived in key areas valuable to water and flood rescue – particularly in handling and flood and stability tests. Attributes which are of importance when someone’s safety is paramount.”

Mark Hart, Marine Sales Director at Survitec, commented: “At Survitec we want to ensure our customers get quality for a reasonable price. This product will add a new dynamic to their operations, keeping London’s community safe when on or under the water. We are obsessive about safety; and are proud to count discerning customers like Babcock International and the LFB as one of our key partners.”

Survitec will be exhibiting its capabilities to the emergency services and swift water rescue agencies at the Emergency Services Show, September 2019

Entries are now open for the Safety at Sea Awards 2019

Signing of a Memorandum of Understanding between Piraeus and the Ports of Venice and Chioggia to strengthen the cargo flows.