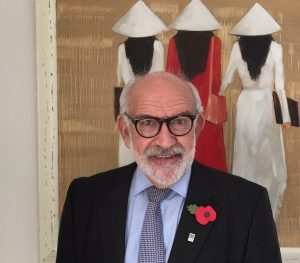 For a second day the BDI (Baltic Dry Index) saw a light improvement  since yesterday despite the continue fall of the Capes. Developments in Geopolitics must be watched as they might produce unwanted detrimental situations… John Faraclas’ brief daily recap:

These 10 points today was mana from heaven in an otherwise battered market… the 600 points threshold was regained!!!! Don’t count your eggs before they are hatched as we are still 1,239 points below the level of the BDI as of the end of Dec 2013 when it stood at 2,247 points. Still a long way to go!

The Capes though continue to bottom out even with minimal losses; the BCI was down four points and now reads 707 with all involved hoping that this is Capes’ final fall. We shall see; we also hope for this to happen as besides volatility the Vale saga was a hard one, but real… and indeed counts a lot! “Natural” disasters can always count on man-made bad constructions…

More than a good day for the Supras’ BSI gaining 24 points and now standing at 478 points – a very good performance following its initial rebound last Friday the 8th of February… (up from 415)!

The Handies’ BHSI was up six points going over an above the 300 threshold; 302! All in all its early days but hope is there; hope with caution though is a deadly “cocktail”!

Still no progress with the Container trade… CAUTION!

Mixed feeling with the Wets; the last published BDTI (Dirties) and BCTI (Cleans) stood at 790 – minus one and 624 – plus six points respectively!

Let’s see the “advent” of 2020 saga; what’s going to happen in a totally unorganised issue, eh? Somebody did called a fast one! Who is to blame and why?; let’s see you written views in a form of comments? Let’s see who dares write openly his/hers view!

We also wonder how shipping’s stakeholders counter to Planet Ocean’s debt of US$ 250 trillion; how can commerce and trade go ahead and “flourish”? eh!

Geopolitics same as yesterday with the same issues becoming even worse… MIGRANTS et al still in full swing… Two more issues surface as a big questions: will president Trump order an invasion to save the Venezuelan people and how will the Kremlin counter…? The other is BREXIT’s twists and turns.  AND now what? Only one solution: Support to Mrs. May is MUST!

In the touristic sector and holidays  we eagerly await the results tomorrow in Stockholm’s Blue Hall with Kallichoron Art Boutique Hotel being among the finalists of the Greek Travel Awards 2019 (http://www.greektravelawards.org). Kallichoron participates in the category of the Best Boutique Hotel Award for providing top personalized hospitality services. These awards are also described as the ‘Nobel’s’ of Greek Tourism, as the Ceremony takes place, as said above, in the famous Blue Hall of the City of Stockholm. The winners are announced tomorrow, Thursday, February 14, 2019. Having witnessed the down to earth islanders’  family hospitality and THAT breakfast I am sue they will thrive! 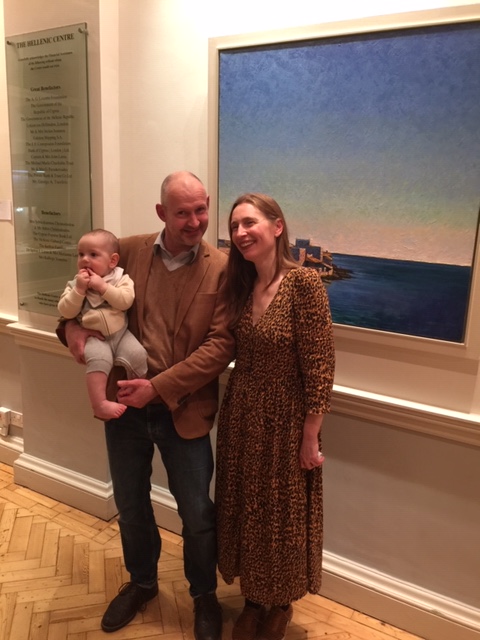 Toby Wiggins with his wife Sophia and son Ezra

On another tone and note what a private view that was earlier on tonight at the Friends Room in London’s Hellenic Centre! Toby Wiggins “transformation” of MANI – painting the Southern Peloponnese in the Footsteps of Patrick Leigh Fermor! Every painting had a distinctive message  from Patrick Leigh Fermor… One hundred plus guests were taken by surprise with the themes, the colours and the tranquil but also vibrant scenes: from were to begin and were to end: “The Agreeable Mellowness of Decay: Gerolimenas harbour” – every shipping man could go nuts…, “The Mountainn Tower”? or the “Morning Light…? Eh! “Kapsaleas above Oitylo, early morning”?

Ah! And what that painting was “Bulls, Bats and Jackals: Gerolimenas Bay (Giali) from Ano Boulari”  or “The shadowless port: Bay of Itilo” in which Patrick Leigh Fermor said: “ Soon we were rounding a cape and sailing at a slant across a broad inlet that penetrated a few miles into the mountains…when we left the caique’s cool awning the sun come stampeding down to the attack” – unique! 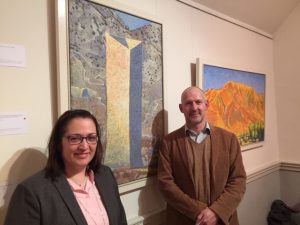 Toby Wiggins with Elena Soupiana, the Press Attache at the Greek Embassy in London, in front of the “Mountain Tower”

His paintings were either oil on canvas or oil on gesso panels or oil on boards – the latter being the majority.

As a shipping person I was more than pleased and content to see the mother sea in all its supremacy next to the mountainous terrain of the artist’s paints.

Have a nice evening and remain on guard from actions emanating from Pirates, Terrorists, Criminals  and Business Hooligans whatsoever wherever you are on Planet Ocean… as things are getting sour… In any case Love is in the Air; enjoy St. Valentines! All we need is Love! All we must do is to give sincere love to our fellow humans…

Love, unconquered in the fight, Love, who makest havoc of wealth, who keepest thy vigil on the soft cheek of a maiden; thou roamest over the sea, and among the homes of dwellers in the wilds; no immortal can escape thee, nor any among men whose life is for a day; and he to whom thou hast come is mad.

You see the Greeks worshipped LOVE like no one else on Planet Ocean with same being depicted by Eros! Just seat and adore Eros at Piccadilly and let me know what comes into you mind!