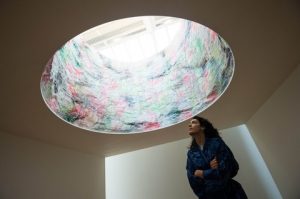 Phoenix Will Rise by Rana Begum and Marina Tabassum Architects.

Is This Tomorrow? Visions of the future by architects and artists at Whitechapel Gallery

A decade after the end of World War II, London was making its lopsided recovery. The City and its institutions – the stock exchange, banks, Lloyd’s insurance market – had revived, but a short walk away the neighbouring, heavily working-class community was struggling, the borough still pockmarked from air raids on the docks and industrial base.

The Suez crisis (which led to panic buying of petrol) and the suppression of the Hungarian uprising quashed any hopes of a new era of world peace. Food rationing in the UK had ended only two years earlier, and there were still shortages. 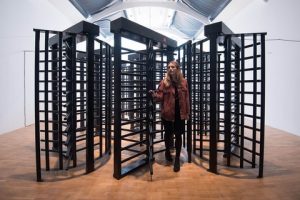 Conscious of the shabbiness around it, the curators of the Whitechapel Art Gallery which had been founded in 1901and is next door to Aldgate East tube station, took a bold step in their mission to spread appreciation of the arts to the thousands of residents in the area.

It launched in the rather dowdy year of 1956 a landmark and ‘lightbulb’ exhibition, entitled This is Tomorrow, beckoning people from the locality and far beyond to see contemporary art and installations reflecting the potential and new vistas of society – just as today, the gallery engages in many projects with schools and organisations.

Six decades on, Whitechapel has reprised the forward-looking theme, albeit with a more tentative title: Is This Tomorrow?

The 1956 show, which the gallery considers one of its most influential, asked British architects, painters and sculptors including Eduardo Paolozzi, Erno Goldfinger, Richard Hamilton, James Stirling and Alison and Peter Smithson to work in pairs to devise challenging installations. 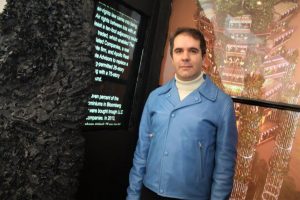 In the 2019 exhibition, which occupies much of the ground floor and two other rooms of the spacious building, there is a decidedly international approach, and a stronger bent towards conceptual art, which as in the predecessor exhibition might occasion some head-scratching by a good many viewers. This time in several constructions, visitors become walk-through participants – part of the exhibit.

Ten new multimedia projects conceived by 30 artists and architects in collaborations offer a spectrum of responses to issues of global concern, described as “speculative visions of the future.”

Sketching the background, Iwona Blazwick, director of Whitechapel Gallery, said: “Sixty-three years ago, this part of London was still a bomb site —it had suffered 50 consecutive days of bombing during World War II.  There were ruins everywhere, and people had very little to eat.  Richard Hamilton, the then director of the Gallery, said that life [at that time] was in black and white. 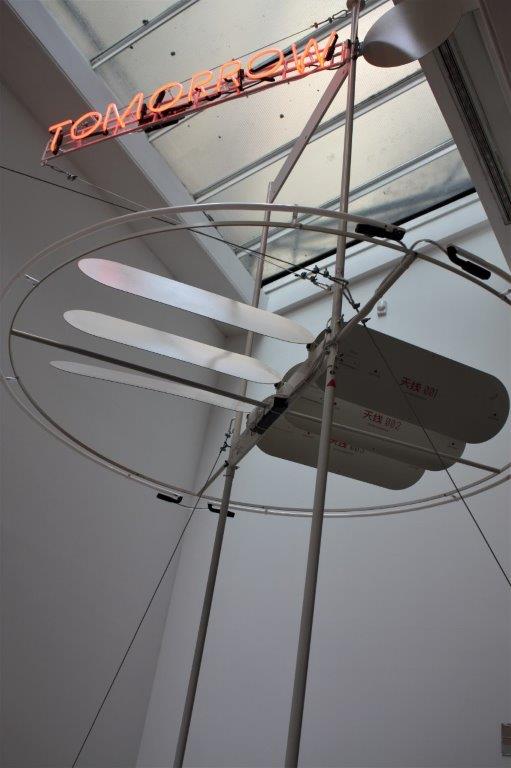 I want to be the future… by mono office and Cao Fei.

“Our predecessors said, we have had enough, and wanted to look to the future. They called [their venture] This is Tomorrow. Our exhibition is not quite so assertive. Our exhibition asks the question, Is this Tomorrow?”

Lydia Yee, curator of the new exhibition, said that it did not mark any anniversary (apart from being the centenary of the founding of the Bauhaus movement which combined art and technical design). “I think we are going through a time of extreme uncertainty, politically, economically, environmentally,” she said. The original exhibition was a “lesson in spectatorship” and she hoped the new show would be similarly appealing to audiences.

As a 1956 British Pathé newsreel Face of Tomorrow of just over one minute’s duration – entertainingly recorded here – puts it, that year’s event could show how architecture, painting and sculpture were “forces acting on our lives.” The script said: “Yesterday’s tomorrow is not today. So maybe today’s tomorrow won’t be quite what is expected.”

Artists and architects invited to participate in Is This Tomorrow? were born well after the date of original exhibition. They are based in and originate from various countries and reflect a gender balance that was mostly absent everywhere in the 1950s.

In the ample gallery space, there are some strong ideas, albeit undercut by a lack of clarity in what others are driving at. Subtly and unsubtly by turns, wielding and welding all sorts of materials, the participants seek to tackle fundamental problems including borders, migration, privacy, living space and people’s relationship with technology. The sense is of a society sliding into a future that is apocalyptic yet anarchic.

On entering the exhibition visitors are invited by the first commissioned work to walk into metal enclosures, as a demonstration of how farm creatures are treated and how architecture proscribes humans’ relationship with animals. This is the creation of UK-based 6a architects in collaboration with artist Amalia Pica of Argentina.

999 Years… the future belongs to ghosts. By Rachel Armstrong and Cécile B Evans.

Exploring the interconnection between people and technology, how consumers adapt themselves and their environments in a rapidly changing society including social media and transport networks, is addressed by mono office (established in 2017 in Beijing by one Chinese and two Spanish founders “at the intersection of architecture, urbanism and product design”) and Cao Fei (a social commentator who lives in the Chinese capital: “Her works reflect on the rapid and chaotic changes that are occurring in Chinese society today”).

By means of I want to be the future. Prototype for machine that dispenses objects and emotions representing possible futures mon office and Cao Fei indicate that the relationship between technology and the mass of people in China especially is both seductive and uneasy. The artistic partners bring into play experimental design to give form to broader questions. “At best such passion for technology drives the country’s creativity and economy, a worst it is symptomatic of a population withdrawing from the reality of modern China,” they say. Their concept reflects on the way the top-down society of China operates.

A firm purchase on current events is shown nearby by what looks like a large “carbon mountain” encrusted with a plethora of everyday objects including plants and leaves and indented by crevices in which films and images scroll allusions to sex, designer babies, wealth, gentrification, queerness and fracking.

The installation will remind some observers of the mining company dam in Brazil which burst, releasing a torrent of tailings waste and killing up to 350 people, which was a repetition on a more awful scale of the collapse of another dam in the area in 2015.

The monstrous mountain is constructed by a New-York based group called Office for Political Innovation including its principal, the architect Andrés Jaque (who was born in Spain and is now based in the US) in collaboration with the American artist Jacolby Satterwhite. Entitled Spirits Roaming the Earth, “it places human bodies in the context of resource extraction, ranging from DNA and shale minerals to high-end real estate and the currency of queer desire.” The title comes from a house track recorded by Jacolby’s mother Patricia.

Delving back 2,000 years or more, an installation by two Mexican practitioners is based on the ancient Mesoamerican calendar Tonalpohualli (simply meaning the counting of days) with measurements such as the distance between the heart and the outstretched hand. It corresponds to the first page of a codex from central Mexico of the 260 days that made up one year. Entitled Mind Garden, Heart Garden, architect Tatiana Bilbao and multi-disciplinary artist Mariana Castillo Deball combine vertical and horizontal Meccano-like perforated beams with an “architectural exploration of the human need to be isolated yet communally connected.” 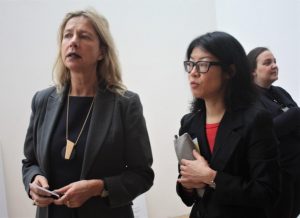 Beneath an unprepossessing structure is a textured and pigmented interior which reflects and refracts light as a “space of hope and spiritual reflection.” This is presented by Marina Tabassum and Rana Begum, both born in Bangladesh. Marina established her architectural practice in 2005 in Dhaka, and says that it prioritises climate, materials, site, culture, and local history to counteract what she finds impersonal and confused in architecture globally. Rana Begum “blurs the boundaries between sculpture, painting and architecture. Her visual language draws from the urban landscape as well as geometric patterns from traditional Islamic art and architecture.”

Menacing turnstiles are erected by Iranian-born Farshid Moussavi OBE and French-born Zineb Sedira in Borders Inclusivity. The stark installation represents the architecture of borders and control against a soundtrack contradicting their nature.

The future belongs to ghosts is a hypothesis presented by Rachel Armstrong and Cécile B Evans. Their interest is in systems that may already be eclipsing constructs of capital, which led them to make a large installation that incorporates microbes, a curtain of fog, and “other traditionally uncooperative elements.” The framework is dictated by “absurd” units of measurement: the 13 sq m area deemed by the UK as the minimum “acceptable” space for human living and the 999 years designated as the maximum occupancy for land. The question is posed whether humankind can achieve a destiny beyond such confines.

Rachel Armstrong is professor of experimental architecture at Newcastle University and Cécile Evans, who lives in London, specialises in sculpture, video and video installations, internet platforms, and performance. Starting with the relationship between human beings and machines, Cécile says that she focuses on the value of emotions in contemporary society.

A model for a museum made to host Leonardo da Vinci’s Salvator Mundi, the world’s most expensive painting which was auctioned for $450m, is conceived by the British firm of David Kohn Architects and the Berlin multi-media artist Simon Fujiwara. They explore how iconic works of art are faring in a world dominated by international capital and driven by mass populist appeal. Current projects by the architectural practice include the refurbishment of the ICA, a campus for New College, Oxford, an architecture faculty in Flanders and an apartment building in Berlin. 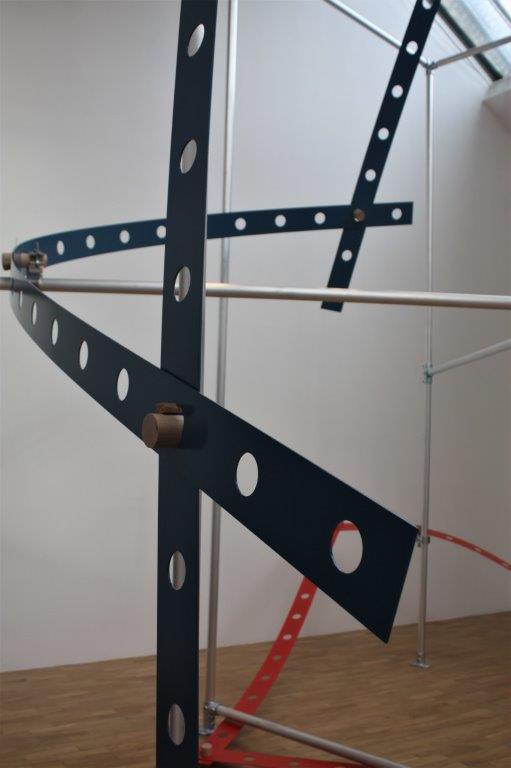 The exhibition is curated by Lydia Yee with Trinidad Fombella and Cameron Foote, assistant curators at Whitechapel Gallery, with Pedro Gadanho of the Museum of Art, Architecture and Technology, Lisbon as curatorial advisor. It is co-commissioned with MAAT, where it will be presented in 2020. It is supported by the Whitechapel Gallery commissioning council: asset management specialist Erin Bell, art collector Leili Huth, shipping executive Irene Panagopoulos, collector Catherine Petitgas, financial expert Mariela Pissioti, and Alex Sainsbury who is chair of the Whitechapel’s trustees.

Is This Tomorrow? at the Whitechapel Gallery, London, runs until May 12 2019, daily except Mondays. Late nights until 9pm on Thursdays and Fridays.

Charity calls for ship owners to embrace conflict resolution as a matter of urgency, following three knife attacks at sea in as many weeks