Flying the flag for seafarer training and recruitment… 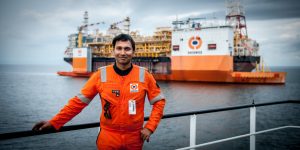 Flying the flag for seafarer training and recruitment: Capt Nishant Kumar of Anglo-Eastern and the Blue MBA Class of 2019

Capt Nishant Kumar is an advocate of ‘balance’ in two key areas of the maritime sector.

He urges a balanced approach to the onset of autonomous ships and ships with minimal crew; and he is keen for the industry as a whole to pay greater attention to the work-life balance of employees in an era when land-based jobs are luring talented young people away from seafaring. He underlines that seafarers bring a unique value proposition to maritime transport that needs to be appreciated by all stakeholders in the shipping industry.

Based in India, he currently spends time in Denmark where he is one of the Class of 2019 of the Executive MBA in Shipping & Logistics (the Blue MBA) at Copenhagen Business School. He is revelling in the part-time MBA course which he says is broadening his horizons.

The rigorous course is adding to his appreciation of the industry on both a macro- and micro-level which his ‘day job’ gives – he visits some 20 to-25 ships a year for audit, investigations, and training purposes and speaks with between 400 and 500 seafarers. His extensive experience in investigating and analysing incidents caused by mechanical and human factors make his views well worth heeding, and feeds into his course work during the intensive MBA programme.

During his 20-year-plus career, the once-steady flow of new seafarers who were citizens of Norway, Great Britain, Germany and Greece has halted, to be replaced by men and women from countries including India, Sri Lanka, the Philippines, China and Indonesia.

The big change though is not felt so much in nationality as in industry-wide shortages of employees, especially as modern vessels require more sophisticated skills from officers. The younger generation is less inclined to embark on a seagoing career as was the case in the 1970s and 1980s when the attraction was travelling abroad and ‘seeing the world.’ Fairly cheap airline tickets offered by budget carriers have made travel more accessible, and many jobs have developed on land which have made potential quality of life more attractive.

Ship management and owning companies are faced with this recruitment dilemma in the profession’s new market structure where people do not want to go away for as long a time as previously.

“The shipping industry has not been able to project itself as an alternative when people are in the colleges, so you hear fewer of them say, ‘yes, I want to go into the merchant navy’” observes Capt Kumar. “Cadets born from 1999 onwards – the millennials – want many things that are different from the needs of their predecessors. It takes a lot of motivation and they need to see more benefits and a good balance of life on ship: free internet on board is one example.

“It is not that we are not getting good people to join, but the drive for the people needs to be more appealing.”

Capt Kumar draws lessons from his career to date about the value, and potential limits, of advances in automation.

“On my first ship, a tanker of 95,000 dwt, there was limited automation, but it was not fully manual. Officers feel they should have control of the vessel. Automation has increased importantly in the last 10 years Now we have integrated systems on the bridge which makes navigation much easier, but it is problematic where watchkeepers do not want to look at anything out of the window: that is not the fault of man, it is the fault of cultures.

“I am not against automation and I feel it will help us to reduce fatigue on board and deal with multi-tasking jobs. For instance, in future we can have an unmanned bridge during day-time in deep seas, operated from a remote-control centre and crew can have more time for various other jobs or have their rest then.

“Are we going to see fully-automated vessels on the oceans? I do not think it is going to be sooner in my lifetime – in crowded lanes such as the English Chanel or off Shanghai, this idea is not possible. A sound business, legal, and insurable case for autonomous ships does not presently exist for deep-sea ocean vessels or coastal tonnage such as roll-on roll-off, feeder container vessels or tankers charting in congested waters. But we should always embrace technology and be optimistic about it. Ships which were crewed by 40 people are now down to 19 or 15 people.”

Rather than downsizing the crew further, better and interactive technology with more trained and skilled crew should be the requirement. Lessons should be learned from major cruise lines where automation and human performance enhancement has progressed in parallel and has created synergy.

Anglo-Eastern has under management 853 ships worldwide of which 644 are under crew and full technical management. It has full crew management on 44 ships, and crew ad hoc management in 166. In total, this involves more than 27,000 seafarers and some 1,700 men and women ashore (the preceding figures are as at the end of 2018). In addition to training that is mandated under conventions and flag-state provisions, the company has its in-house training to help officers and crew understand operations and commercial factors. Systems are in place for them to continue their training while on leave. As they learn more and more there is much less risk of human error, Capt Kumar emphasises.

Capt Kumar says he is benefiting greatly from his participation in the Blue MBA course. “For those like me from a ‘hard core’ shipping background, it gives us a very broad prospective – my colleagues in the class have some 500 to 600 years of experience between them.

“It is like working on an IBM super-computer where you have all the data. It goes far beyond reading the news; here you have everyone from the shipping industry, as part of a very wide scope of knowledge which is not available, I think, in any other college in the world. It is quite unlike rote learning in high school or doing a bachelor’s degree. We remember all the discussions we have in the class, and after the class over a pint of beer.

His key take-away is the value in having first-rate classmates “who have inspired me to do better and have been my secure base”. He believes that his classmates are the future chief executives and leaders of the shipping industry “who are going to transform this industry to more sustainable, unconventional, and digitalised levels.”

“The course modules have been divided in such a way as to enable you to make a business plan and know how to lead an organisation… and that is a key take-away. We are being given the tools to transform a situation or set up a company.”

Within his own company, chief executive Capt Bjorn Hojgaard “has been my mentor for this programme and taught me the essence of corporate and business strategy. His continuous guidance and support have inspired me to become a better leader, performer and a strategist.”

He adds: “Planning visits to Copenhagen for MBA modules amid frequent visits to ships and projects would not have been possible without the support of my quality assurance department.”

He has conducted accident and Injury investigations involving several types of ships. Some of these on behalf of shipowners and charterers have related to losses such as cargo and ship damage. He took at Cranfield University in the UK an accident investigation post-graduate course in collaboration with the Marine Accident Investigation Branch. He says that Cranfield allowed him to learn from the best in the industry and meet accident investigators from across the world. Investigation techniques included the systemic root cause analysis known as SHELL (which stands for software, hardware, environment, live-ware) which places emphasis on the human interface with other components of the shipboard system.

He has undertaken critical analysis of big data from reports of near-misses, injury and other incidents, and worked on trend prediction and loss prevention across his organisation’s fleet.

Other achievements have included reducing expensive overheads such as bunker costs for charterers and shipowners for which he gained recognition during his sailing days as mate and master.

Columbia Shipmanagement takes eLEARNING in Shipping to the next level