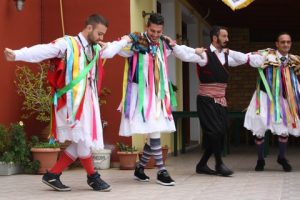 One of the biggest Carnival events in Greece has begun on Naxos, the largest of the Cycladic islands. Dionysus, the god of fruitfulness and festivities, would have merrily approved of the variety and gaiety of events within the modest compass of this community.

From the colourful Kordelatoi carnival costumes and the sounds of Koudounatoi  bell-ringers – the custom involves men dressed in capes and masks, with bells suspended from their costumes, dancing noisily around the neighbourhood to evoke the Dionysian spirit and banish evil – visitors and residents enjoy a substantial programme, which includes traditional events in the villages, the glorious Torchlight Parade, the Grand Parade of the Carnival and a few surprises.

On Saturday March 2 the Cultural Association of Sagri PNOES organised a Kordelatoi costume parade on the main square of Sagri village in the southwest of the island. 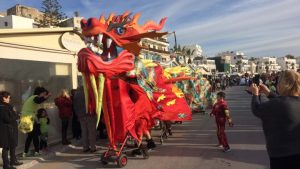 The Cultural Association Damaris organised the carnival event Elaiofories in Damarionas, a village on the southern side of the olive groves in the Tragea basin. Dressed in olive garb, carnival-goers roamed the streets accompanied by the sounds of traditional instruments. The parade ended at Potirou Square with a party.

On Monday March 4, Kordelades in their carnival costumes, visited Kynidaros east of the main town Chora (Naxos town) and in the evening went on to Melanes, under the auspices of the Cultural Association of Melanes Kouros o Ellinas. Melanes is one of the oldest villages, 8 km south east of Chora. The village, which has some 500 inhabitants, many of whom are involved in cattle-breeding and agriculture, derives its name from the dark earth and is surrounded by olive groves and fruit trees. Around Melanes are many Medieval towers which were used as homes or summer houses by noblemen.

On Tuesday 5th of March Kordelades are due at the village of Egares under the auspices of the Cultural Association of Melanes Kouros o Ellinas.

On to Friday March 8, when under the temple of Apollo, myth blends with the history of Naxos, through a reconstruction of the arrival of Theseus and Ariadne, her wedding to Dionysus and the capture of the god by Tyrrhenian pirates. Satyrs and maenads accompany this initiation to divine worship. 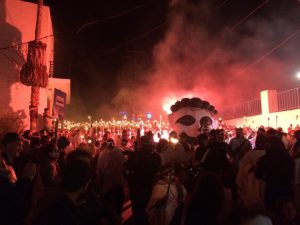 The story is that a ship with black sails had left Faliro for Crete, carrying young people from Athens as a sacrifice to the Minotaur. Among them was Theseus, son of Aegeus, king of Athens, who wanted to kill the Minotaur. In Knossos he fell in love with Ariadne, the half-sister of the Minotaur. Ariadne helps him escape the Labyrinth with a string of yarn. On the return journey to Athens, a storm forces them onto Naxos.

Dionysus, god of wine and merriment, a resident of the island (he is credited with blessing the land’s fertile vineyards) sees the beautiful Ariadne and visits Theseus in a dream forcing him to leave Ariadne.  When she awakes, realising she has been abandoned by her lover, she  marries Dionysus who leads her away to Mount Drios, the present-day Koronos,, and from there to Mount Olympus, official residence of the gods. Before leaving Naxos, they took part in a wedding festivity and the dancing Dionysus attracts the attention of pirates who kidnap him. Dionysus then shows his true nature by performing miracles, turning the pirates into dolphins, apart from one who recognised him as the god. 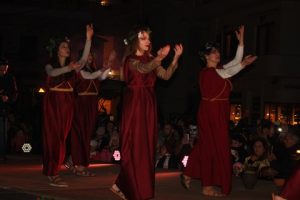 Torchlight parades blaze on Saturday March 9. White sheets, black and white paint, wheat, the sound of kettledrums and cries set the scene for this lively event, starting at the Ursuline School and the Lyceum of Naxos. After the parade, Mandilaras Square rings to the sound of traditional instruments.

Next day the Grand Parade starts at noon at Chora beach. Groups of carnival-goers join new and impressive floats.

Similar goings-on will enliven Neoi Tripodes, also known as Vivlos, one of the largest and most picturesque villages in southwestern Naxos with its characteristic windmills. The Cultural Association of Neoi Tripodes is the organiser with the participation of Kordelatoi at the village square. 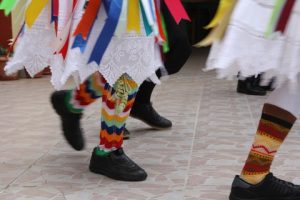 Later at Apeiranthos village, considered by many to be the crown jewel of Naxos because over the centuries it has managed to retain its authenticity, Koudounatoi until late at night will sound bells and carry other symbols of Dionysus, making a deafening noise in the narrow streets, to welcome spring and chase away evil spirits. Built in amphitheatre style on the slopes of Mount Fanari, the village boasts magnificent views of the Naxian mountain ranges. Local people say that from Apeiranthos, there is no way of telling that you are on an island. Stone-built houses make the place seem more like northern mainland Greece than a Cycladic village.

On Ash Monday, March 11 the village of Filoti welcomes once again with Koulouma dietary heritage the first day of Lent. Various delicacies and the traditional bread lagana are offered, accompanied by traditional music and the sounds of Koudounatoi.

March 11 and 13 witness the free-entrance music and dance performance Shake, Salsa and Greek Music, at Iakovos Kambanellis theatre in the evening. This is a presentation of the Music and Dance Association of Naxos Choroekfrasi and the dance team Street Latin Danzart. Inspired by old Greek movies and the film Oi Thallasies oi Hantres, they promise plenty of music and laughter. 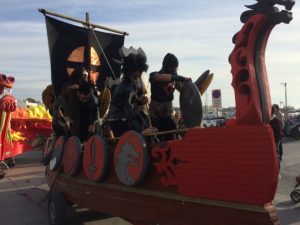 On Friday March 8 at Vintzi there had been a re-enactment of the Ariadne story organised by the Municipality of Naxos and Small Cyclades and directed by Dimitris Gousopoulos with choreography by Margarita Tsigou.

Naxos is noted for its Anthesteria (flower festival) with the first day known as Pithoigia, during which earthenware jars of the new wine are opened. The first wine was brought to the Temple of Dionysus for libations to the god outside the closed shrine dedicated to him, to bless the harvest. Afterwards, the people tasted the wine and danced and sang in thanks to Dionysus. Satyrs and Maenads participate in the staging of Pithoigia.

Shaped like a rhombus, Naxos has been referred to as a diamond on the Aegean, with four colourful gems alongside.

Chinese Ambassador to the UK visits Port of...

The Garden Fashion Show is almost sold out!