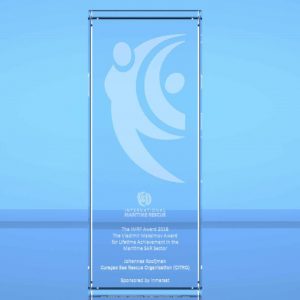 The IMRF Awards 2019 are now open for nominations​

It’s time to thank the exceptional, inspirational people who save lives at sea

The International Maritime Rescue Federation (IMRF)   is calling for outstanding individuals, teams, professionals or volunteers, companies and organisations involved in maritime search and rescues (SAR) – all around the world – to be nominated for an IMRF Award 2019.

“The World Health Organisation estimates that 40 people drown every hour around the world, but without the incredible actions of maritime search and rescue professionals that number would be much higher,” says Theresa Crossley, CEO IMRF.

“These Awards recognise those incredible people and the new innovations and technologies that make saving lives at sea possible, even in the most difficult and demanding circumstances.

“The IMRF Awards are now in their fourth year, but each time I review the nominations I am both inspired and humbled by the stories of actions undertaken by maritime SAR professionals around the world,” she adds.

Last years’ winners included a ship’s master who rescued three starving fishermen drifting on a sinking boat, a lifeboat station crew from the Netherlands that had rescued four people from a drifting guard vessel in force eight north westerly winds with ten metre high waves, and a pink rescue buoy flotation device that’s saving lives around the coast of South Africa. In addition, two exceptional lifetime awards were presented to two individuals with more than 100 years between them, saving lives at sea in the Caribbean and Bulgaria.

The IMRF is asking everyone to think about those involved in maritime SAR, whether professionals, volunteers, individuals or teams ‘who really make a difference’, or a ‘game-changing’ maritime SAR product, service or operational procedure and to consider nominating them for an IMRF Award now.

Nominations are open for the four Award categories:​

· Individual: For Outstanding Individual Contribution to a Maritime SAR Operation

· Team: For Outstanding Team Contribution to a Maritime SAR Operation

This year, the Awards ceremony will be held during  London International Shipping Week (9 – 13 September 2019) an event which attracts high-level government representatives and shipping industry leaders from around the world.

The 2019 Awards lunch will take place on an historic vessel moored on the River Thames in London on 10 September.

Visit www.imrfawards.org for more details and to submit a nomination.