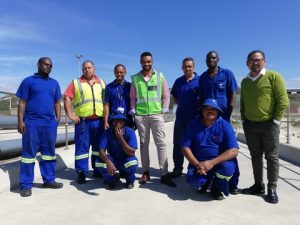 The A team – This achievement could not be made possible without the commitment and flexibility of this core team of nine people. They are from the left Pata Gotyi, Irvin Deysel, Malibongwe Lobese, Luvuyo Marangula (sitting down), Melikhaya Freddie (in the centre) Irfaan Johnson, Johnayne van Heerden (sitting down), Shadrack Khosa and Jean Meintjies.

[Port Elizabeth, South Africa, 15 April 2019] The Port of Ngqura, the first port in the world to have a fixed jet pump sand bypass system, is meeting its stringent dredging targets of 240 000 tonnes of sand per year, after successfully overcoming challenges.

“This is an achievement as we are complying with the Record of Decision (environmental legislation) which stipulated the strict conditions to be adhered to in the development of a port of this nature in an environmentally sensitive area,” said Mandilakhe Mdodana, Environmental Manager for the Port of Ngqura.
“The Port of Ngqura is the only port in South Africa to have a Record of Decision for its construction and operation. This means that it is the only port that was subjected to environmental legislation during its entire development, operation and will be during its future development,” Mdodana said. 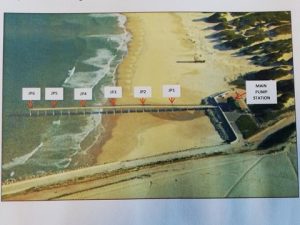 Sand is captured in a sand trap and pumped via pipelines to a discharge point on the opposite end of the port. Both capturing and discharging occur in the wave zones. The annual net longshore transport rate within Algoa Bay varies from 240 000 to 320 000 tonnes per year. This is the average quantity of sand required to be bypassed by the system annually. Failure to bypass and achieve a minimum volume of 240 000 tonnes per annum could result in a fine of about R10 million. 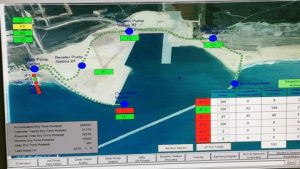 The route that the sand is being pumped

“The system requires a rigid maintenance programme which keeps it going 24 hours a day, seven days a week. The port had to develop and refine maintenance-, standby- and recovery plans in time to counteract the temporary shortfall as part of a continuous improvement process. This included making provision for unplanned maintenance, daily planning and scheduling and improving maintenance techniques – all remaining within budget,” said Freddie Melikhaya, Mechanical Engineering Technician, leading the sand bypass team. 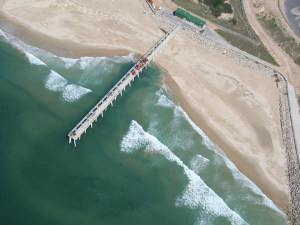 Other initiatives include:
• Remote operations after hours
• Standby resources such as vehicles and people during weekends
• People working extra hours and being compensate with off-time
• Establishing visual maintenance management tools for all staff
• Implementing continuous improvement techniques to constantly monitor performance, including daily and monthly targets

Maintaining South Africa’s commercial gateways
In simple terms the system is a “fixed dredger” which operates cost-effectively when compared to a mechanical dredger. Dredging is a crucial aspect of ensuring that vessels can enter and exit our ports safely. It helps to halt beach erosion and sand build-up in the ports. This assists with navigation, flood control, coastal development, mining and environment management.

TNPA’s Dredging Services department is implementing an investment programme in excess of R2 billion to renew its fleet which aids the removal of approximately four million cubic metres of excess material from the seabed every year at South African ports.

The need for maintenance dredging
In South Africa the need for maintenance dredging is threefold:
1. Some of the ports have rivers running into them. These rivers bring silt into the port which compromises port depth;
2. The movement of ships within the port creates high and low spots due to propulsion wash i.e. the ships propellers cause the sea bed material to move.
3. The effect of Littoral drift or longshore movement of sand. This occurs primarily on the east coast of the country where the prevailing winds and currents cause a northward movement of sand, so sand flows up the coast. To counter this and to mimic the natural movement of sand, Dredging Services creates sand-traps.